Meeting readers where they are

After more than 10 years, AOPA Pilot has been redesigned. Editor in Chief Tom Haines asked readers what they thought in his “Waypoints” column.

We welcome your comments. Address letters to: Editor, AOPA Pilot, 421 Aviation Way, Frederick, Maryland 21701. Send e-mail to [email protected]. Please include your full name, address, and AOPA number on all correspondence, including e-mail. Letters will be edited for length and style. 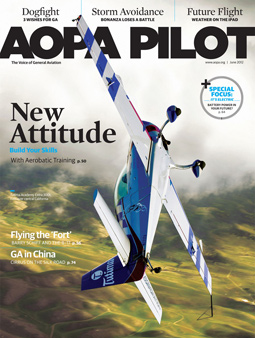 After more than 10 years, AOPA Pilot has been redesigned. Editor in Chief Tom Haines asked readers what they thought in his “ Waypoints” column.

As a military veteran with 26 years active duty service, I have often followed the military principle of “don’t ask the question if you can’t stand the answer.” You asked for feedback to the redesign of the magazine. Normally I would not judge it based on one issue and will keep an open mind with future issues, but you asked. I cannot put my finger on exactly why, but to me it looks somehow less professional. Please do not misunderstand, I am not against change, but I see no reason to fix something that is not broken. The only change I would have made to the “old” version of the magazine would have been to put the “Pilot Briefing” section after the “AOPA Action” section. The Action and Briefing sections contain good information and need to be read, but are like vegetables on a plate; need to be eaten but not the tastiest part of the meal. Once I have gotten through these parts, I can get to the main course (the meat) of the magazine—and then, for me, culminating with the “Never Again” article for dessert. I always read the magazine cover to cover and prefer the flow of the “old” version. This is just one person’s opinion, but remember, you asked.

I applaud many of your new developments, but the new smaller print in the June issue is not one of them. I just passed my FAA medical last week and I can see well enough to fly. But I am not sure I can get through your whole new issue with the smaller print. I hope that will be reconsidered. Thanks for reading and considering my comment. I do enjoy your magazine and think you guys do a great job.

Tom Haines replies: Thank you for sharing your thoughts. For the record, the print is not smaller. Previously, we used 9-point Utopia on 11 points of leading. Now we are using 9-point Mercury on 12 points of leading. The additional leading is meant to improve readability. We will consider your comments along with others as we continue to evolve the magazine.

Amen to Thomas A. Horne: Bring back the spin requirement. In 1950 I was learning to fly in a J–3 on floats at a seaplane base. After the first hour and 20 minutes of straight and level, turns, climbs, glides, and following a creek, my instructor started me on stalls. Up and over we went and the world whirled. The river below was spinning around like a whirlpool. “Stick forward,” we were headed down. The spinning continued, the river a blur. “Opposite rudder,” the spinning stopped. “Now, ease the stick back.” The nose rose, we were no longer dropping like a rock, and—wow—again, we were straight and level and I was breathing normally.

I had spun an airplane! And I knew how fast a spin could happen. And I knew that if I had enough air below me I could get out of a spin. It was a great lesson to know how disoriented you suddenly can become if you’ve never experienced an unusual situation, and how helpful it will be if you are prepared to handle it. Besides, spins are wonderful confidence boosters.

The FAA should require spin training for the private certificate. I ran a flight school and we had a Cessna 150 Aerobat for that purpose. Every student was shown, then demonstrated, entry then recovery from a skidding stall/spin as if they were turning base to final. Many instructors were afraid. In that case I flew with the students myself. Then I went up with each instructor and did five- or six-turn spins to build their confidence. Then they did them. White-knuckle pilots make mistakes and can freeze up if something different happens. Wring the darn thing out, or get a boat.

We fly a homebuilt Cozy Mark IV, the only airplane I know that has a custom dog kennel built in the back instead of rear seats. Dixie and Dolly are two toy fox terriers and pet-assisted therapy dogs as well. When they were puppies, they went to the airport often while we were building the airplane. I was thrilled when I found that someone was making ear protection for them because I knew they would be flying a lot. They go crazy when we go through the security gates at the airport and love to go on trips with us. They even have their own windows to look out. The kennel gets much more use than rear seats would get in our airplane. We have taken our dogs wherever we felt they were welcome, from casual fly-ins to dog-friendly resorts in the Bahamas. So many places to go, so little time!

For years Gerda, my miniature pinscher, flew with me a lot on personal trips. She would be in the back for takeoffs and landings, but as soon as we were at cruise, she would come up and stay with me to make sure I was doing everything correctly.

Yes, these are only toys right now (“ It’s Electric”), but so were the steam engine, light bulb, and cellphone. Ah, that breakthrough battery is the key. Whoever invents that next-generation battery, the one that surpasses the storage capacity of gasoline, will be the next king of the world. Let’s hope it’s someone right here in the United States, rather than an outsourced scientist. Imagine all the remaining crude oil staying in the ground, instead of ending up in our children’s lungs. Exciting indeed. Thanks for a well-written, well-researched article.

Welcome to the future

Once I saw the AOPA FlyQ app I just had to have it. The only issue was that I had an Andriod phone, not an iPhone, so when my daughter was upgrading her 3G to a 4G she gave me her old 3G and I thought then that I could finally get my FlyQ app. But no, the 3G phone was version 3.1, so the app still wouldn’t work. I then went back to the store and had them do a techy upgrade—only to find out that 4.1.1 was the latest version they could get on the 3G phone, too. Finally, I decided to just go ahead and buy a new 4G iPhone (version 5.3.1) so that I could get the app. Woo hoo! I’m a 37-hour student pilot, love AOPA, love Flight Training magazine, love the safety and training sections of AOPA, and really love the FlyQ. It is a great resource and makes the decision to fly and planning process much simpler.