Get the app Get the app
AOPA will be closed July 4th, in observance of the Independence Day holiday. We will reopen at 8:30 am ET on Tuesday, July 5.
News & Media Never Again: Crossing Charlie

Strong crosswinds are nothing to fool with 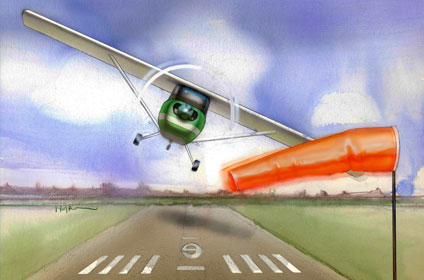 In 1985 I had purchased a low-time cream-puff 1955 Cessna 180. N9370C was based at Camarillo Airport, roughly halfway between Los Angeles and Santa Barbara, California.

The 180 Skywagon is slightly bigger than its counterpart, the Cessna 170, but flies as well with no bad habits. The big 225-horsepower Continental up front provides great performance, and I suspect it will lift just about anything you can stuff in its cabin.

Shortly thereafter, a friend called and explained that he was diagnosed with terminal cancer. I was shocked to hear the bad news. However, Ken Doe was an upscale guy who never complained. He offered to sell me his publishing business, and I accepted.

I intended to make weekly trips to the publishing office in Twentynine Palms, California. It was a 160-mile drive from our home in Thousand Oaks—five or six hours of driving, depending on freeway traffic.

The light immediately came on. I have the 180. I can fly the 140 nautical miles in an hour or so.

I chose to use Joshua Tree Airport (now Roy Williams Airport), which was closer to the office than the Twentynine Palms Airport. I made several uneventful weekly flights to the desert.

It was a Friday afternoon. I planned to fly to the office, take care of business, and return home on Saturday morning.

Standing next to Charlie I stuck my finger to check the weather. Holding it above my head I found a clear azure sky with a slight breeze from the west. Perfect flying weather. This was before Camarillo had its control tower. There seemed to be no point in wasting time calling the weather man on such a beautiful afternoon. Besides, I recalled the prior night TV newscast stating it was going to be a beautiful weekend.

Clearing traffic on Runway 26, I poured on the power and the 180 seemed to leap into the air. The route was simple: Fly out to the Palmdale VOR, grab hold of the 081 radial (V386) and follow it to the SOGGI intersection (Palm Springs 329 degrees), turn right, and poof, I’m there.

Nearing Agua Dulce (L70) at 5,500 feet, Charlie left the cool, calm air of the coast and started to bounce and wiggle as it entered the desert heat. The turbulence seemed to increase as I neared Palmdale. The desert was clear; however, I could tell by the blowing sand and dust below that the desert wind was howling on the surface. The groundspeed was now indicating a whopping 195 mph. That was a 50-mph tailwind. Wow! I was making great time.

The air remained turbulent as I rounded the turn heading southeast at the SOGGI intersection toward Yucca Valley. The Hi Desert Airport was off to my left at an elevation of 2,500 feet. I spotted the airport and made a call on CTAF requesting the active runway. The agent got on the horn and told me they preferred that I use Runway 24, and “the wind is blowing at 30 knots with occasional gusts up to 44. Be careful of the crosswind. There is no other traffic reported in the area.”

No other traffic! Of course not. Who would be stupid enough to fly in this kind of wind other than me? I entered the pattern and had to crab to remain parallel to 24. Turning slowly, Charlie was aligned on final. The airplane bounced and shook as I lowered the speed and applied two notches of flaps. I was looking out of the left side window in order to keep a straight 240-degree heading. The windsock was like a solid log tied to a pole displaying a 90-degree crosswind. I recall yelling out loud, “You’ve made crosswind landings before. This one is no different. Keep the windward wing low, steer it with your feet, and at the last second straighten and land.”

Crossing the threshold at an indicated 70 mph, I came off the power. Suddenly, I felt the 180 falling out of the sky. Did the wind decide to stop blowing? Instinctively, I applied full throttle to make a go-around. Charlie responded quickly, bouncing on one wheel and then catapulting back into the air. I somehow regained control as the end of the 2,500-foot runway seemed to fly past.

With a lump in my throat, I said, OK, I’ll try again. Only this time, I’m flying the bird to the ground using a wheel landing configuration. Surely, that will work. The Cessna made it around the patch, and as before once on the final approach I was flying at a 45-degree angle to the runway. I was still fearful that the wind correction was too much and I would exceed the published crosswind capability. I also envisioned a nasty ground loop. Seeing this was nearly impossible, I aborted the second attempt with shaking knees and a dry mouth. It was then that the agent got on the radio. “Cessna Nine-Three-Seven-Zero-Charlie. Take another look at the airport. In wind conditions such as we’re having this afternoon, we land using the dirt. We call it Runway 30. It’s only 1,600 feet, but that should help.”

Looking back, I spotted the worn narrow path. At that time, there were no markings—just a mowed area that crossed 6/24. The windsock was still pointing from the northwest. I swung Charlie around and aimed for what I considered to be the threshold dirt of 30. The airplane continued to bounce and shake, but at least I was looking out the front windshield of the Skywagon. With full flaps extended, the 180 crossed the fence effortlessly. Cutting the power, the old boy kissed the dirt surface in a three-point position without as much as a bounce. Immediately, I dumped the manual flaps, then turned off in just in 300 feet.

Approaching the tiedown area, the man from the office came out, squinting from the blowing dust. He grabbed hold of a wing strut as I rotated Charlie into a parking spot.

Opening the door I looked at him, asking, “Windy today, wouldn’t you say?”

“Yep! Last time I looked, it’s now blowing with gusts up to 55 knots. That’s the desert for you. That old dirt runway sure comes in mighty handy, sometimes. You did a fine job of setting this bird down.”

With the Skywagon safely tucked away, I took care of business. Later, I thought of the attempted landings and my foolish reasons for not calling the weatherman. What I did was stupid. I learned quickly that strong crosswinds are nothing to fool with.

The following morning, as I called Flight Service for a weather update on the return trip, I felt a tap on my shoulder from my assistant editor. I learned that my friend, Ken, had passed away during the night.

The Saturday’s return flight was uneventful in calm air. As Charlie droned along peacefully, I thought of Ken. I was happy that he thought of me when considering the sale of the business. I also hoped he was now in a better place.