Get the app Get the app
Already a member? Please login below for an enhanced experience. Not a member? Join today
News & Media Technique: Guns, snakes, and LA airspace

Tips for slithering through a hornet's nest

Tips for slithering through a hornet's nest 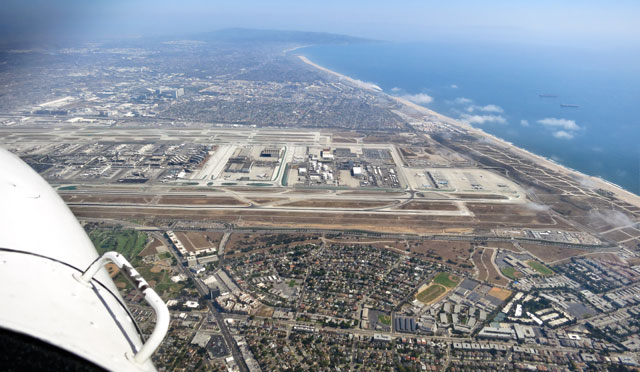 Los Angeles airspace makes my armpits sweat. They sweat even now, two weeks later, as I open up the LA Terminal Area Chart, torn and wrinkled from my two trips across LAX, to write this article. (An effort is in progress to make the map easier to use.) As additional research, I’m back in touch with Chief Flight Instructor Mike Lozano of Channel Islands Aviation in Camarillo, California, and he has me digging into the Aeronautical Information Manual again—just as he did during my day-long course in LA airspace survival, er, training.

Pilots of LA are lucky to have the flyways, corridors, and transition routes that allow general aviation to operate above the city. Now that those complimentary remarks are out of the way, I found flying the corridors a huge challenge.

After the first flight I was not sure about making the second one. Maybe I had enough material from the flight to Long Beach out of Camarillo. Yeah, that’s it. I don’t need to go through that jungle again. It took a calming lunch with Lozano, Camarillo Islands Aviation Flight School Manager Sarah Oberman, and AOPA Pilot columnist Barry Schiff to talk me into the next flight to Torrance and back. Schiff told me that I could even go from Camarillo to Catalina Island at 3,500 feet, right through the LA airspace. I thought he was kidding, like saying, “You can put your head in a lion’s mouth,” but checking the LA chart, I discovered he wasn’t kidding.

It takes time and effort to master the LA airspace system, especially if you don’t know local geographic features. Look at what you have to do: talk with SoCal controllers, hold the assigned altitude exactly without an autopilot (so you can maneuver quickly), recognize visual checkpoints even if you aren’t from the area, avoid the airspace of one towered airport while landing at another, remember to change transponder codes when using the Class B tunnel above LAX, know where to look for likely conflicting traffic, communicate position reports to other aircraft, and scan for traffic while consulting the charts and airport information on your lap.

Apparently I am not the only one who has difficulty with the airspace. LAX Tower Operations Manager Jeff Cunnyngham said there are a couple of violations a week above his airport. He added that you’ll need to practice near-perfect tracking of VOR radials; get off just a little and you’ll find yourself too close to arriving or departing LAX traffic. “It takes a highly skilled pilot to know exactly where they are,” Cunnyngham said.

There are four routes above LA—the Coliseum, Hollywood Park, Mini, and Coastal routes. There is also the Los Angeles Special Flight Rules Area, which refers to a precise tunnel through Class B airspace above LAX. Lozano does not like the Mini Route, having once been told to circle for 15 minutes south of Santa Monica in a very small, very busy chunk of airspace. It’s higher stress than pilots need.

I got to experience the stress part. In the morning, I flew the Coastal Route from Camarillo to Long Beach that was reported to have a few clouds at 1,500 feet, but after crossing LAX we discovered Long Beach was actually near VFR minimums. Lozano pointed me toward Long Beach, which was under a thick haze, and suggested I descend to get under it. He had the Long Beach terminal procedures readily at hand for an instrument approach. I descended at 1,000 feet per minute—sometimes more—to avoid getting caught on top. The Long Beach tower controller told us to stand by, meaning we couldn’t enter Long Beach airspace. That meant a second turn away from Long Beach toward Torrance, but we were getting too near Torrance airspace, finally turning toward the shipping docks and the ocean. When Long Beach Tower invited us back, the plan was to head for Signal Hill, and being from the East Coast, I had no idea if the hill I saw was the right one.

The second try that afternoon, the flight to Torrance, went much better. I went from, “What’s going on?” to, “I can do this.”

On the flight with Lozano back from Torrance we followed the Pacific coast to the Naval Air Station at Point Mugu before turning north towards Camarillo. We got a call from Point Mugu controllers advising us to stay above 1,000 feet because the U.S. Navy Seabee gun ranges were active. About that time, Lozano pointed to the boulder-strewn mountain on our right and mentioned there are lots of big rattlers there. It took both of his hands to demonstrate the diameter of the demons’ bellies. Suddenly it all fell into place—bullets below, rattlesnakes “that big” waiting for me on the mountain, and LA airspace just behind. All the same. No difference.