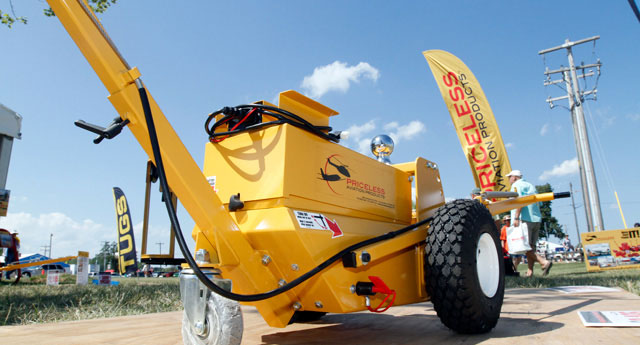 The model 701 tug from Priceless Aviation Products in Lawrenceville, Ga., now features a transaxle design that enables it to make much tighter turns. The castering wheel at left is a visible sign of the new capability, which reduces floor marking and increases ease of use.

A Georgia firm that makes aircraft tugs and markets ground power units logged record-breaking sales at EAA AirVenture 2012. Despite a reported drop in overall attendance, Priceless Aviation Products was one happy vendor, attracting firm orders in numbers not seen before.

“Best (show) we’ve ever had,” said Mark Tullis, the machine shop manager who manned the exhibit booth on the next to last day of the show. “We’ve even sold some big tugs.”

Those “big tugs” designed for FBO use moving very large aircraft, fetch prices in the tens of thousands. A much more modest model geared to handle most GA aircraft, the 701, newly redesigned with a transaxle that allows the main wheels to turn at different rates, was offered for $2,195. The 701 is able to haul a 4,500-pound aircraft from hangar to ramp with relative ease, no longer needing to be picked up and repositioned during tight turns. “We’ve sold 17 of them at this show,” Tullis said of the 701.

Powered by a 24-volt battery system and equipped with variable speed control, the 701 improves on its predecessor, which had a solid axle and could leave tire marks on hangar floors after tight turns.