Get the app Get the app
AOPA will be closed July 4th, in observance of the Independence Day holiday. We will reopen at 8:30 am ET on Tuesday, July 5.
News & Media &lsquo;Seven minutes of triumph&rsquo; 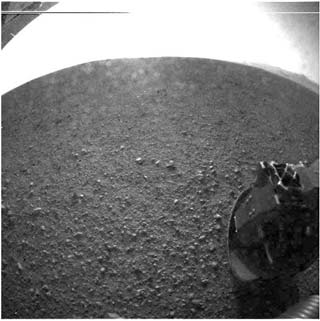 One of the first images beamed back from Curiosity after landing Aug 5 (PDT) on Mars. The rover’s wheel is at the bottom right. The rover will send high-resolution images. Image credit: NASA/JPL-Caltech.

Cleared to final approach by distant controllers powerless to intervene from that moment on, the Mars Science Laboratory capsule cradling Curiosity endured a perilous descent through a very thin atmosphere and safely deposited its cargo—the product of a $2.6 billion effort—on the surface of Mars Aug. 5 (PDT).

With its safe touchdown, NASA increased its Mars batting average to .736, with 14 successful landings in 19 attempts.

"Today, the wheels of Curiosity have begun to blaze the trail for human footprints on Mars. Curiosity, the most sophisticated rover ever built, is now on the surface of the Red Planet, where it will seek to answer age-old questions about whether life ever existed on Mars—or if the planet can sustain life in the future," said NASA Administrator Charles Bolden. "This is an amazing achievement, made possible by a team of scientists and engineers from around the world and led by the extraordinary men and women of NASA and our Jet Propulsion Laboratory.”

Communication with Earth was largely cut off during the seven-minute descent from entry into the Martian atmosphere. Curiosity, so far away that light waves need 14 minutes to make the trip, broadcast simple tones—a heartbeat—to signal all was well. Computers fired in sequence more than 70 rockets and explosives that separated Curiosity from its interplanetary stage and steered the craft during descent. For a time, enclosed in a heat-shielded capsule, Curiosity flew a nearly horizontal path, angled so that Martian air flow produced both lift and drag to help slow the craft for descent, making shallow turns to line up for final approach. A parachute deployed (and was captured by an orbiting camera) to further slow Curiosity, while the final descent required a rocket-powered sky crane that dangled the car-sized rover below, keeping the rockets high enough from the surface to avoid creating a massive dust cloud, and deposited it gently on a gravel field near Mount Sharp. 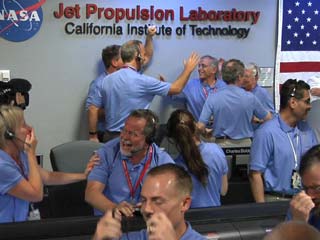 The first transmissions confirming a safe landing by the Mars rover Curiosity prompted celebration at the Jet Propulsion Laboratory, where controllers could only watch and wait during the challenging entry and landing.

How that gravel, a type of rock often associated with flowing water, came to be on Mars will be among the first questions the rover seeks to help answer. Curiosity is equipped with geological sampling and analysis tools far more advanced than its predecessors, and will soon embark on nearly two years of planned exploration. (Previous NASA rovers Spirit and Opportunity far outlived their design expectations, and there is reason to hope Curiosity may do the same.) The landing was widely acknowledged as the most dangerous phase of the entire mission. The entry, descent, and landing procedure had been dubbed “Seven Minutes of Terror,” given the tough luck so many missions have had on Mars—and the sheer impossibility of remote intervention.

"The Seven Minutes of Terror has turned into the Seven Minutes of Triumph," said NASA Associate Administrator for Science John Grunsfeld. "My immense joy in the success of this mission is matched only by overwhelming pride I feel for the women and men of the mission's team."