Get the app Get the app
AOPA Members DO more LEARN more SAVE more - Get MORE out of being a pilot - CLICK HERE
News & Media Resuming the Journey: Alaska mountain flying

On the day off between the children’s and teen’s camps at Brooks Range Bible Camp north of the Arctic Circle, CFII and 15,000-hour bush pilot Dwayne King and I took off in a Cessna 172 from Crevice Creek, a private 2,200-foot grass strip, and headed for Wiseman, about 40 miles east. We were going to fly through the mountain passes of the Brooks Range, not over them, using that tried and true navigation: pilotage. As I studied the Fairbanks sectional, a direct course looked like a heading of due east, but we are north of the Arctic Circle and adjusted 20 degrees east to fly a heading of roughly 70 degrees. Bluecloud Mountain, just west of Wiseman, was the highest peak on the chart at 5,903 feet.

We climbed into the Skyhawk, and did our run-up before leaving the tiedown spot. We taxied to the far end of the grass strip, holding the yoke back to protect the prop from the grass and dirt as much as possible; threw down 10 degrees of flaps; kept it rolling; and pointed it down the runway. At liftoff we accelerated in ground effect, climbed out, and headed east. Short- and soft-field operations are normal here and in most of Alaska. I’ve watched larger airplanes, including Cessna 206s and a Piper Aztec, land and take off with no problem from this strip as they’ve transported children back and forth from their villages. Three weeks ago, Samaritan’s Purse pilots were in here with their CASA C-212-200 helping to fly in the 42,000 pounds of equipment and material needed to carve this youth camp out of the pine-covered mountain. The camp was so new when I arrived a week ago that the outhouses still smelled like spruce, rather than, well, you know. 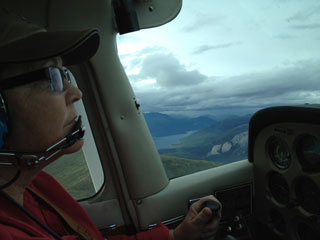 The visibility was excellent, and we had broken clouds at 6,000 feet, hanging over the leeward side of the highest mountain peaks. We leveled off at 4,500 feet, deviating from our course as necessary to follow the passes around the higher peaks. As we flew over the Wild River, with Wild Lake to the north, flying close to the mountains on one side, King talked about how to judge whether we were high enough to clear the next ridge of mountains.

“See that ridge of mountains behind the one we are approaching?”

“Does that ridge appear to be rising or sinking behind the mountain we are approaching?”

“That means we are flying above the top of the mountain immediately ahead of us. If the ridge behind appeared to be sinking, we would need to climb immediately.” Aha. I was trained to fly at least 1,000 feet above the mountain tops to give enough altitude to climb against downdrafts. The challenge in the mountainous areas of Alaska is balancing the continual need to fly in weather that often is not VFR above the mountain peaks but is VFR below them, with the higher risk inherent in that kind of operation. Navigating mountain passes is routine for bush pilots here, as there are no roads through the high terrain to these remote places. You either fly or you are stuck within snowmobile range of your village. 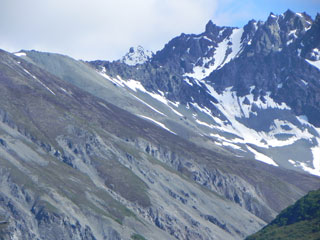 We picked our way through the next beautiful ridge of mountains, over the North Fork of the Koyukuk River, my finger following our route on the chart on my lap. Straight ahead was Delay Pass, and we flew through it, with stark Bluecloud Mountain looming close ahead. We looked below where Conglomerate Creek met the Glacier River in a mass of rapids, and turned northeast toward Glacier Pass—following it around the north side of Bluecloud Mountain. King was looking for wildlife, but the sheep and bears were hiding from the sound of the Skyhawk. As we came around the mountain, the Wiseman River opened up below us, leading us southeast to the old mining town of Wiseman, with the Trans Alaska Pipeline running north to south as far as the eye could see, the white pipe cutting a long straight line just east of town.

Josh, a 16-year-old student pilot from Wiseman, met us with his gear, ready for his week at the teen camp that started in the morning. The teens have the option to take flight lessons during camp, and Josh was looking forward to logging more time. It was 11:20 p.m. when we departed from Wiseman with Josh taking the left seat, but the sky was bright and visibility was still good. The ceiling was starting to thicken, though, and was solid in places at 8,000 feet. Since it was late, we flew direct and picked up a tailwind at 6,500 feet over mountains—and we rocketed back to camp in a record 20 minutes.

Kathy Dondzila is the manager of technical communications for AOPA’s Pilot Information Center. She has 300 hours total time and an instrument rating. After being an inactive pilot for nine years, she decided to get back in the left seat.