Get the app Get the app
News & Media Reconciliation of former combatants inspires, heals 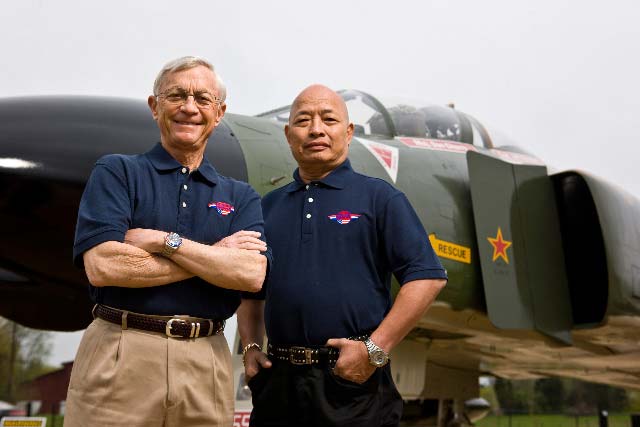 Former combatants Dan Cherry and Nguyen Hong My fly a Cessna 172 together. They became friends after Cherry tracked down the pilot whose aircraft he had destroyed over Vietnam. Photo by John Fleck, courtesy Dan Cherry.

A journey that spans decades, that has healed wounds and forged friendships, began in mortal combat. Retired Air Force Brig. Gen. Dan Cherry served two combat tours in Vietnam, earning many decorations during the course of 295 combat sorties. On April 16, 1972 Cherry locked horns with a MiG-21. Basco Flight, a quartet of F-4 Phantoms, had one purpose at that moment: seek and destroy.

Splitting into two elements, Basco Flight closed with and engaged the MiGs, turning hard and moving in and out of clouds. Cherry’s target was soon separated from his wingman, fighting for his life dodging volleys of air-to-air missiles.

“He flew his airplane very skillfully,” Cherry recalled during an interview at EAA AirVenture. But the Vietnamese pilot’s luck ran out first. “He had dissipated all of his energy trying to avoid my wingman’s missiles.”

Cherry launched a Sparrow radar-guided missile that tracked true and blew the MiG’s right wing off at the root. The stricken airplane instantly snap rolled and the pilot ejected, his parachute opening “right in my face,” Cherry recalled. “I had to maneuver to avoid it.”

As Cherry flew to rejoin his flight leader and return to base, he wondered about the fate of the pilot whose aircraft he had just destroyed. “You wonder what his name is, did he have a family.”

In the midst of a fast-paced combat tour, those thoughts were pushed aside. A chance encounter 36 years later in Ohio with the F-4 in which Cherry earned his kill brought the enemy pilot’s fate back to mind, and Cherry began a search.

It was fruitless, at first, but a friend near Cherry’s home in Bowling Green, Ky., put Cherry in touch with relatives living in Vietnam, and eventually with a television news personality there who was able to find the man who had dangled beneath the parachute Cherry just managed to avoid. Nguyen Hong My had recovered from broken arms and a broken back suffered during the high-speed exodus from his MiG, and gone on to work in the insurance industry after the war. Cherry was invited to meet his former quarry face-to-face, on Vietnamese television, in 2008. He gave that a lot of thought, reluctant to offend veterans who had survived torture and brutality in Vietnamese prison camps.

“They encouraged me to accept the invitation,” Cherry said, noting that former prisoners of war distinguish the roles played by prison keepers and other combatants. And so he went.

On the television set, an apprehensive Cherry wondered how the pilot he shot down would react. Hong My, dressed in a business suit, strode across the stage with his head high, and offered a firm handshake. 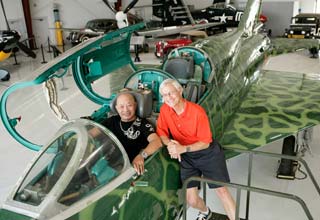 “'Welcome to my country,'” Cherry recalled that first conversation. “'I’m glad to see you’re in good health. I hope we can be friends.'”

At dinner, Cherry and Hong My talked for hours, with Hong My’s family helping overcome a language barrier. Worries that the Vietnamese pilot might have a different recollection of events, or wounded pride, quickly dissipated.

“I just had the sense that we would have far more in common than we ever had differences,” Cherry recalled. And so it was. “Two fighter pilots can always talk about flying airplanes.”

A series of visits have followed, and a book, My Enemy, My Friend , published in 2009. Cherry and Hong My have made appearances at EAA AirVenture and the Smithsonian, and addressed veterans’ groups. Time and again, Cherry said, there have been “men, in tears, coming up to us and thanking us.”

While Cherry is pleased that the book is doing well (he brought more than 300 copies to an AirVenture 2012 book signing, and ran out), and his appearances with Hong My draw standing-room crowds, it is the healing of old wounds that gives Cherry the greatest satisfaction—along with a strong friendship that has grown between the fighter pilots once on opposing sides. “That’s something special, right there,” Cherry said.

The chain of friendship and reconciliation has extended since the book was first published. Hong My had his own war victory, having shot down an F-4 Phantom before Cherry turned the tables. At Hong My’s request, Cherry set to work learning the fate of that flight, and was soon able to narrow the possibilities to a single aircraft. If the crew had been killed, Hong My wanted to offer condolences to the family. If they survived, he wanted to meet.

The pilot, Cherry learned, had survived the war but lost his life in a car accident in 2007. Weapon systems officer John Stiles was alive and well, however—and history had attributed the F-4’s loss to ground fire. The crew had never seen Hong My and his MiG-21. At first, Cherry said, Stiles was skeptical.

An emotional reunion between Stiles and Hong My was arranged, and skepticism was replaced with closure. Stiles and Hong My shared a long, private conversation, relating facts that only they could have known, and Stiles emerged with a smile on his face, Cherry recalled. At last, he knew exactly what had happened that day.

Cherry marvels at the chain of events, beginning with a split-second reaction to avoid the stricken enemy pilot’s parachute, followed nearly four decades later by a chance encounter with his F-4 Phantom outside a VFW post in Ohio, leading to Vietnam, a series of visits, and a story that has helped heal old wounds.

“It has been a great privilege,” Cherry said.