Get the app Get the app
AOPA will be closed July 4th, in observance of the Independence Day holiday. We will reopen at 8:30 am ET on Tuesday, July 5.
News & Media IFR Fix: 'What's that down there?'

IFR Fix: 'What's that down there?' 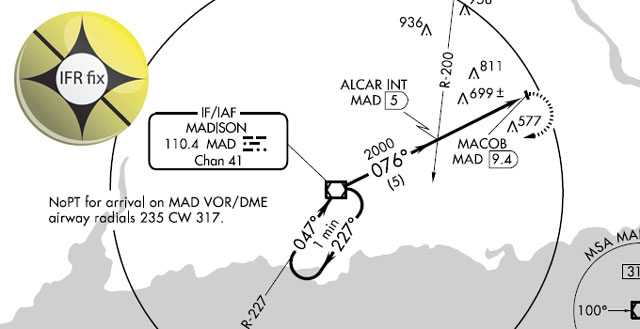 An instrument pilot has reviewed the VOR-A approach described in the IFR Fix “Checkup to Chester,” and is flying the procedure, using a radial from a second VOR to identify the final approach fix, ALCAR.

The pilot sets the Nav 2 omni bearing selector to the HFD 200-degree radial, notes the “from” indication and a displacement of the course deviation indicator one dot from the center.

Established toward the fix, he descends from 2,100 feet to 2,000 feet msl, levels off, and reviews the procedure’s next (and final) leg.

This demands focus. So when the pilot checks his progress toward ALCAR, he is surprised to observe that the course deviation indicator remains one dot out.

He turns up the volume on Nav 2 and checks the Morse code identifier—even comparing the sequence of dots and dashes to the identifier’s published Morse code.

“What’s that down there?”

His instructor has been taking it all in.

That’s curious. We haven’t reached the final approach fix yet.

Well, yes we have.

By a cruel coincidence, nearing the destination also displaces the CDI about a dot out—to the opposite side of the gauge.

What evaded the pilot, despite meticulous adherence to procedure and proper setup of the two VORs, was taking time to visualize the aircraft’s current position relative to the intersection, and then confirming it with the No. 2 Nav’s CDI.

Had he “turned” the aircraft in his mind to parallel the 200-degree radial, the pilot could have built a mental picture of his aircraft in a position west of the radial, with the radial—and therefore, the CDI—to his “left.”

He also might have reminded himself to expect only stealthy movement of the Nav 2 CDI, which would center, then drift right after the aircraft passed the FAF. That subdued CDI behavior was a product of ALCAR’s considerable distance from the Hartford VOR; with no zone of confusion, or station passage to animate the CDI’s movement, the intersection simply drifted away astern.

Did your instrument instructor demand that you “parallel the course” as a mental exercise for orientation to courses and intersections? Did it bring back childhood memories of being commanded to eat your vegetables, and seem just as unpalatable?

How do you feel about vegetables now?