Get the app Get the app
AOPA will be closed July 4th, in observance of the Independence Day holiday. We will reopen at 8:30 am ET on Tuesday, July 5.
News & Media YouTube accident pilot: &lsquo;I was going to abort&rsquo;

Idaho pilot Les Gropp had six weeks to second-guess his decisions before the world got into the act.

Gropp, at the controls of a 1947 Stinson that crashed following a takeoff at high altitude on a hot day, has been seen by a million people, in video of his ill-fated flight that was posted Aug. 4 by one of the passengers—all of whom walked away with scratches. Gropp, a commercial pilot who is 70 and logged about 1,200 hours flying UH-1 “Huey” helicopters in the Vietnam War, suffered a broken jaw and ribs. He expects to make a full recovery, and return to the cockpit with a lesson learned.

‘Not the best decision’

The Stinson struggled down the 5,000-foot unpaved runway at Bruce Meadows in Idaho, and Gropp said he was about to abort the effort when “a gust of wind put me in the air.” The Stinson managed to climb just above treetop height but was not gaining altitude, though Gropp said he had expected it would, once airborne. It eventually became clear the Stinson was not going to climb. “After that, it was finding a place to land.”

Soon after passing the last of the clear area, the airplane began to sink, and the wings clipped treetops sending the four-seater tumbling to the ground.

Gropp said he managed to slow to about 40 mph just before impact, and the Stinson came to rest upside-down amid the trees, cameras still filming as the dazed pilot and passengers got themselves out of the wreckage.

“My estimation of the density altitude was about 2,000 feet off,” Gropp said, noting that he had taken instruction in mountain flying and logged about 300 hours in general aviation aircraft, including the Stinson he purchased in 2010, in the past four years. Many of those flights were to backcountry destinations.

Gropp said the decision to attempt the takeoff despite climbing temperatures that pushed the density altitude well above the airport elevation of 6,370 feet “was not the best decision of my life,” and he should have ferried his passengers to their next destination—about 45 minutes away, with 6,108 feet of paved runway—one at a time.

The vintage POH did not make performance calculations easy, Gropp said, and he thinks they can be improved to provide critical information in a clearer format.

Critics have not been shy about taking Gropp to task for various decisions, including an attempted liftoff at altitude with a fully enriched mixture, and failure to abort the takeoff once the ground roll stretched to excessive length. Gropp was reluctant to discuss the particulars in detail, but said he was aware of the criticism leveled by online viewers. He did not offer an opinion on the public reaction.

“Everything’s been said with the movie,” Gropp said. 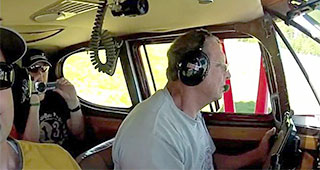 Pilot Les Gropp, captured by video cameras as he attempted an ill-fated takeoff in Idaho June 30, said he is thankful that everybody walked away. Image by Nathan Williams, used with permission.

Nathan Williams, the right front seat passenger, captured images of the crash with a small HD camera mounted inside the cockpit. Williams, a longtime family friend (Gropp was his scoutmaster when Williams was a Boy Scout), said the flight into Bruce Meadows had been smooth and uneventful, his first in a general aviation aircraft.

“We weren’t expecting anything quite like this,” Williams said of the accident. The same is true of the mass interest in the footage he posted more than a month after the accident. The video was intended for family and friends, people who had heard the story for a month but never seen it from inside the cockpit. As YouTube viewers began clicking, Williams said he was tempted to take the video down—“I didn’t want it to hurt Les”—but opted to leave the original up and running when he saw that others on the site “had basically stolen it and made it their own.”

Williams; Gropp; Gropp’s son, Tol Gropp; and Alec Arhets have achieved a celebrity none of them expected, called on for network television interviews to recount their harrowing ordeal. It is unusual, if not unprecedented, for a GA accident to be captured by in-cockpit video, and seen by hundreds of thousands, a distinction Gropp said he did not seek--posting the video was a decision made entirely by the passengers who own the footage, Gropp said. Gropp said the video’s popularity is most likely attributable to two factors: the novelty of having a cockpit view of a crash, and the fact no one was killed.

“It’s kind of become something that we didn’t intend or expect at all,” Williams said.

Williams said that he is grateful nobody was killed, or more seriously injured, and he hopes Gropp’s mistake becomes a lesson that helps others avoid a similar fate—or worse.

“Les is a guy that I really respect,” Williams said. 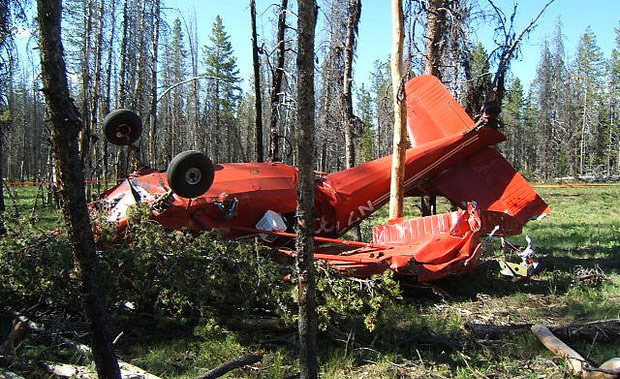