Get the app Get the app
AOPA will be closed July 4th, in observance of the Independence Day holiday. We will reopen at 8:30 am ET on Tuesday, July 5.
News & Media Army airship makes maiden flight in Lakehurst 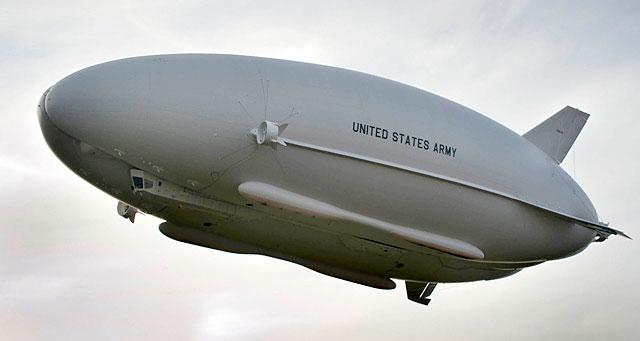 The U.S. Army Long Endurance Multi-Intelligence Vehicle (LEMV), an airship made for surveillance and reconnaissance, made its maiden flight Aug. 7.

Harkening to the denizens of a bygone age, but with a decidedly modern look, an airship took flight Aug. 7 over Lakehurst, N.J., and the U.S. Army was back in the blimp business.

The Long Endurance Multi-Intelligence Vehicle (LEMV) that launched a flight test program with a 90-minute maiden voyage has a very different look than the semi-rigid airships last flown by the U.S. Navy out of Lakehurst in 1962. This new generation airship sports an envelope 300 feet long filled with 1.3 million cubic feet of helium designed by Britain’s Hybrid Air Vehicles , cradling within a fold of fabric at the bottom an American-made gondola that can be stuffed with a flexible array of cameras and spy gear from Northrop Grumman.

Prime contractor Northrop Grumman touts the airship as the “world’s largest, most persistent” lighter-than-air reconnaissance platform. The Army agreed to pay $154 million for the airship, with deployment planned in Afghanistan.

A pilot on board is optional—the LEMV can be flown from a standard ground station, or operate autonomously. It is designed to cruise above 20,000 feet for up to 21 days, with V-8 engines that can push it to a blistering 80 knots. The thrust can be vectored for precise steering control. A 16-kW electrical system runs sensors which can be mixed and matched to suit a particular mission. 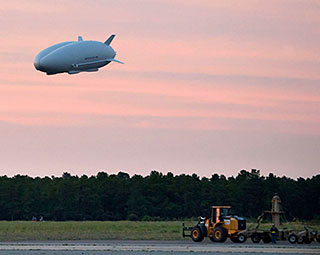 The maiden flight was made about a year later than first planned. Alan Metzger, vice president and program manager of long endurance multi-intelligence vehicle and airships for Northrop Grumman Aerospace Systems, praised the engineering team for completion of a “technically challenging” task.

“This platform will establish a new standard for a long-endurance, persistent intelligence, surveillance and reconnaissance capability over the battlefield,” Metzger said.