Aspen Avionics has received FAA supplemental type certification of its much anticipated Connected Panel system. Announced a year ago, the system allows a remotely mounted Wi-Fi box produced by Aspen to become a communications conduit between the aircraft’s panel-mount systems and portable devices, such as an iPad or smartphone.

We had the chance to do a flight demonstration of Connected Panel recently from Double Eagle II Airport near Aspen’s Albuquerque, N.M., headquarters. Flying in the company’s Cirrus SR22 demonstrator, we created a flight plan on an iPad using the ForeFlight electronic flight bag app and with the touch of the “send” button watched it get validated by the Aspen multifunction display. A touch of a button on the MFD pumped the flight plan over to the Garmin GNS 430 navigator, dramatically simplifying the loading of flight plans. No more knob turning on the Garmins.

Because the EFB is not certified, the FAA requires the certified Aspen system to verify the validity of the waypoints sent over and then requires the pilot to accept the data through the button touch.

En route, a similar process allows easy changes to flight plans or “direct-to” as ATC issues reroutes. Similarly, the pilot can make changes in the panel-mount system and ship them back to the handheld device.

The iPad sees the Wi-Fi signal from the Connected Gateway box mounted behind the panel as just another wireless network connection, automatically connecting every time the iPad is in range after the initial setup. In fact, multiple Wi-Fi enabled devices in the cockpit can interface through the Gateway at the same time.

Tom Gray, Aspen’s avionics systems certification engineer, noted that the most exciting prospect about Connected Panel is what hasn’t even been thought of yet. The ability to connect with the ship’s certified systems via a remote device opens up all sorts of possibilities.

Foreflight is just one of numerous companies that have signed on with Aspen to build various new capabilities. Among the others are Hilton Software and Jeppesen with their EFBs, Sporty’s Pilot Shop, PS Engineering for managing audio systems, and JP Instruments for the future ability to monitor and store engine performance data. The AOPA FlyQ flight planning app can share data through Connected Panel. For a complete list of company partners, see the website.

Aspen builds the Connected Gateway box in Albuquerque. The system sells for $2,499 and is now shipping. Aspen charges no licensing or royalty fees for access to its API that developers can use to create new capabilities. 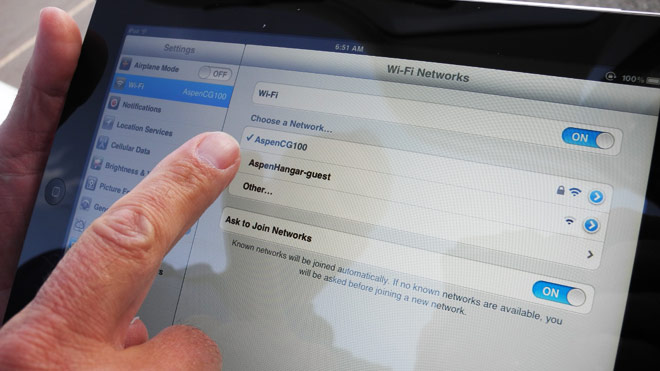 Contributor (former Editor in Chief)
Contributor and former AOPA Editor in Chief Tom Haines joined AOPA in 1988. He owns and flies a Beechcraft A36 Bonanza. Since soloing at 16 and earning a private pilot certificate at 17, he has flown more than 100 models of general aviation airplanes.
Go to Thomas B Haines's Profile
Topics: Avionics, Gear, EFB