Get the app Get the app
Already a member? Please login below for an enhanced experience. Not a member? Join today
News & Media Florida braces for hurricane strike 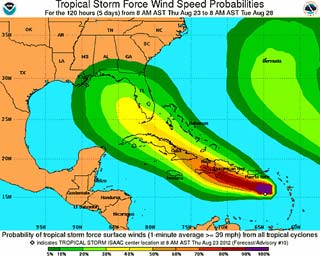 Twenty years to the day after Hurricane Andrew devastated Florida, a new threat was taking shape in the Caribbean, with Tropical Storm Isaac expected to gain hurricane strength before turning north toward Florida. Former forecaster Max Mayfield, who sounded the alarms from the National Hurricane Center in 1992, recalled in an interview with National Public Radio that Andrew was a relatively weak and disorganized storm until just before landfall.

Andrew slammed into the Bahamas as a Category 5, giving Florida residents just a day to prepare for one of the worst storms in state history. Residents along the Gulf Coast are well advised to keep a sharp eye on Isaac, and AOPA offers aircraft owners a wealth of information in a hurricane subject report, including details of how best to protect an aircraft (move it far away), and what to do if evacuation is not possible. A hangar may not be the best option, depending on its age and condition.

AOPA Insurance Services offers another resource, including experts who can help ensure adequate coverage is in place and brief owners on options that may include coverage for aircraft relocation by a professional pilot, depending on the policy. Owners should check the hurricane relocation coverage section of the policy for details.

Forecasters noted Aug. 23 that while computer models were coming to greater agreement that Isaac will gain strength, the storm’s final destination remained uncertain.

“Near the 96 hour point the guidance models are spread between Southeastern Florida and Western Cuba … and at 120 (hours), they are between Northeastern Florida and the central Gulf of Mexico,” the National Hurricane Center stated. “Significant uncertainty remains about the threat Isaac poses to Florida.”