It’s the situation every multiengine pilot seeks to avoid.

The critical engine has lost power, and the propeller windmills uselessly in the breeze. The good engine is pounding out full power, creating maximum asymmetric thrust. And the nose is held high above the horizon as airspeed rapidly decays.

This is the prelude to a loss of control in most twins—but Velocity Aircraft’s new V-Twin is designed to be different. 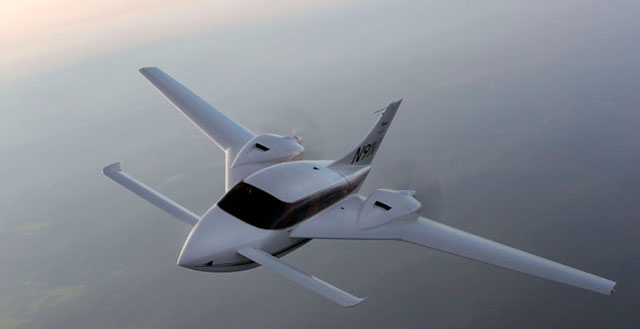 “Keep pulling the stick all the way back and hold it there,” says Velocity Aircraft Chief Pilot John Abraham, knowing that that advice he’s giving goes against everything pilots are taught in multiengine training. As the V-Twin slows below blue line, the wing on the side of the dead engine gets noticeably heavier, but opposite aileron and rudder keep the airplane from turning in that direction. Finally we reach stall speed.

Most conventional twins would perform an involuntary roll toward the dead engine at this point—but not the V-Twin.

As I hold full aft stick, the canard stalls; the nose drops about 15 degrees below the horizon; airspeed increases; the nose slides toward the dead engine, then rises above the horizon again, and the canard stalls a second time. The cycle repeats itself several times before I pull both throttles back to idle and hold full aft stick. Now, the V-Twin’s nose nods and bobs like a bored college student at an after-lunch chemistry lecture as the airplane flies straight ahead in a long, lazy, sine wave descent. The up-down oscillations make the V-Twin feel like a rocking chair.

Since the canard’s angle of incidence is 3.5 degrees greater than that of the swept wings (and they share the same airfoil), the canard stalls before the wings reach their critical angle of attack. Despite the canard’s repeated stalls, airflow over the wings remains smooth and uninterrupted.

Also, the V-Twin’s engines and (normally rotating) pusher props are mounted close together so the thrust lines aren’t as far apart as a conventional twin’s. The design feature reduces asymmetric thrust and helps lower the minimum controllable airspeed well below the airplane’s stall speed. 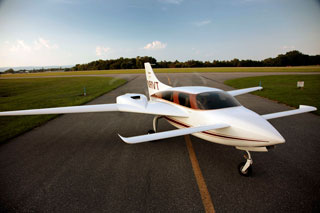 As soon as I relax back pressure on the stick to lower the angle of attack, the V-Twin resumes normal flight. With the addition of cruise power, the airplane’s stable, well-balanced control characteristics return.

“No one has ever brought an economical twin to market that’s incapable of spinning,” said Abraham, who performed the first flight of the V-Twin in March of this year. “That’s a big part of what makes this airplane so unique.”

The genesis of Velocity Aircraft’s new V-Twin took place more than 10 years ago when Duane Swing produced a wooden model of a twin-engine design and brought it to the Sun’n Fun Fly-In in 2002. More than 100 people expressed interest in the airplane that resembled a piston version of the Beech Starship and signed up for a newsletter to stay abreast of developments. But Swing waited until late 2011 to actually produce the V-Twin.

We’re carrying two FAA-standard sized adults in the front seats and about 65 gallons of fuel on this demo/photo flight on an 85-degree Fahrenheit day near sea level. Engine run-up is standard, and we’re soon cleared for takeoff.

I hold the brakes and power up the engines well into the governing range. Initial acceleration is brisk, and the rudder is almost instantly effective. After a ground roll of about 1,800 feet, I rotate at 80 KIAS and the nosewheel comes off the pavement obediently, followed about two seconds later by the mains. There’s no extra drag during landing gear retraction, so the airplane accelerates smoothly during the approximately five seconds it takes for the gear to tuck up.

I pitch for 104 KIAS (blue line) and the VSI indicates a climb rate of 2,500 fpm. Once clear of the airport traffic pattern, I settle into a cruise climb behind the Bonanza A-36 photo ship at 120 KIAS climbing at 1,000 fpm. 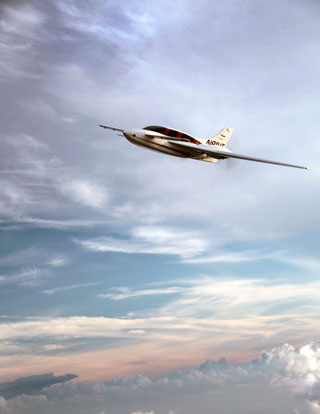 Abraham says the normally aspirated engines give the best cruise performance between 8,000 and 12,000 feet. At 10,000 feet, full throttles and 20 inches of manifold pressure at 2,500 rpm typically yield 170 KTAS and a total fuel burn of 12 gph. On the 800-nautical-mile flight from the Velocity factory in Sebastian, Fla., to AOPA headquarters in Frederick, Md., the V-Twin flew at 11,000 feet and covered the distance in 4 hours 20 minutes and consumed less than 50 gallons of fuel.

Abraham said he’s flown the airplane more than 1,100 miles nonstop and landed with 2.5 hours of fuel in reserve.

We explore the V-Twin’s single-engine performance at altitudes up to its max single-engine climb altitude of 8,000 feet. Abraham says it will maintain altitude on one engine at 12,000 feet at full gross weight.

The V-Twin doesn’t have flaps or speed brakes, but simply flattening out the prop pitch allows the airplane to make steep approaches without gaining excessive speed. Abraham sets up an intentionally high approach to Frederick Municipal Airport’s Runway 23. On a two-mile final at 2,500 feet agl, he slows to 100 KIAS, lowers the landing gear (two green lights mean the nose- and main landing gear are down) and allows the V-Twin to descend at 2,000 fpm. Once he intercepts the normal glideslope, he adds power to arrest the rapid rate of descent and flies the last half mile normally at 90 KIAS.

Unlike conventional airplanes in which the tail is in the propeller’s slipstream, the V-Twin’s canard gets no assist from prop blast. The mains roll on, and Abraham wipes off the remaining power as he brings the nosewheel to the ground. Moderate braking brings the V-Twin to a stop after a ground roll of about 1,600 feet.

At a time when the market for piston twins seems all but dead, it’s surprising to see a new airplane that brings such promise to the moribund category.