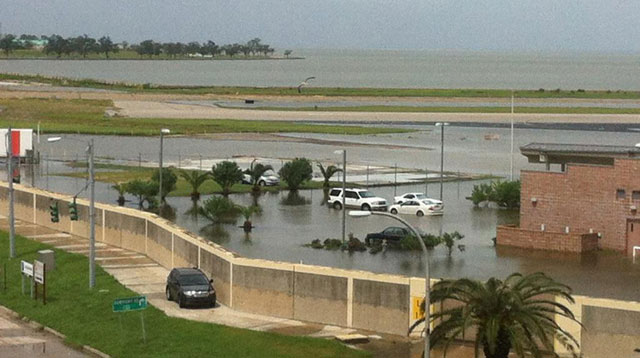 Lakefront Airport in New Orleans flooded Wednesday as the city closed off a valve that controls airport drainage to protect nearby homes and businesses. Photo courtesy Ankur Hukmani.

Lakefront Airport in New Orleans remained under water Aug. 31, with several aircraft believed damaged and the city holding off on draining the water.

Ankur Hukmani, owner of Flight Academy of New Orleans, one of several business located at the airport, said the city had not responded to pleas to open a valve that would allow the water covering much of the field to drain back into Lake Pontchartrain. Hurricane Isaac, which made landfall Aug. 28 as a Category 1 storm, lingered much longer expected, dumping two feet of rain or more in some areas. The airport is located just outside of the levee system that protects New Orleans, and drains its water into a canal inside the levee line. As with Hurricane Georges in 1998, the city opted to cut off drainage from the lakefront airport, causing water to rise around hangars and cover the runways. Hukmani said the city could have acted sooner to release the water as the storm moved north.

“Everybody’s pointing fingers at each other, but nobody’s willing to make a decision,” Hukmani said. “Somebody is neglecting their job.”

A message left with Orleans Levee District Executive Director Gerry Gillen was not immediately returned. Gillen told a local television station Aug. 30 that he had made the call to close off the airport’s single drain, and fully reopening it would put the city at risk.

“The water goes into the city and will flood homes because it would go under the federal levees and then it would just be pumped back into the lake,” Gillen told the television station. 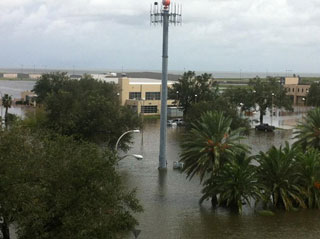 Lakefront was not alone: an Airport Support Network volunteer told AOPA that St. John the Baptist Parish Airport in Reserve, La., was also under water – supplying an aerial photo of the flooded field. AOPA Central Southwest Regional Manager Yasmina Platt contacted state transportation officials, who replied that they were still assessing damage and had not been aware of the flooding at the airport in Reserve.

Coast Guard officials at a media briefing said helicopters had rescued more than two dozen people from flooded homes in the region, including one rescue on the morning of Aug. 31. Levees upgraded in the wake of Hurricane Katrina protected the city, but there was extensive flooding in many outlying areas.

“As we speak I am standing in 18 inches of water,” Matthews said, noting that the water had begun to recede from twice that depth. “That’s a positive.”

Matthews said it was unclear how many aircraft had stayed at Lakefront as the storm approached. About ten aircraft remained in his hangar, including a pair of King Airs that likely escaped with landing gear damage from the rising water. Matthews said the airport remained relatively dry until Aug. 29, when it rose from nothing to nearly four feet deep in the space of about two hours after the city closed the drainage valve.

Many aircraft from Lakefront did relocate in advance of the storm, including several that landed at Hammond Northshore Regional, where the Air National Guard relocated its base after losing its hangar at Lakefront during Katrina.

Airport manager Jason Ball said Hammond did not flood during Katrina, but Isaac lingered so long, and dumped so much rain, that the runways began to flood. Here, too, the airport drainage system was overwhelmed, though no aircraft were damaged, and the water receded more quickly. Ball said Aug. 31 that water still covered a few feet of the edges of the main runways, but operations – both fixed wing and rotary – had resumed, and the airport was never forced to close. An Aug. 30 scare prompted by the near-failure of an upstream dam had eased Aug. 31, Ball said.

Ironically, the airport is in the midst of designing an upgraded drainage system. As part of that job, engineers are modeling 50-year and 100-year storm events.

“I found it ironic,” Ball said. “Here’s your hundred-year storm, right here … I just ran your model for you.”

Matthews was optimistic that Lakefront Airport would eventually recover: 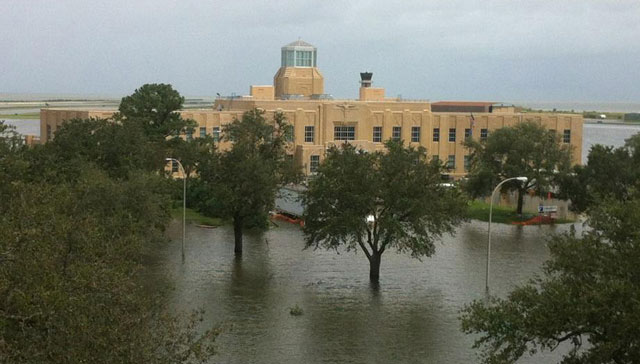 The Art Deco terminal building at Lakefront Airport in New Orleans had been scheduled to reopen this year for the first time since Hurricane Katrina. Water prevented a damage assessment as of the morning of Aug. 31. Photo courtesy Ankur Hukmani.