Get the app Get the app
Already a member? Please login below for an enhanced experience. Not a member? Join today
News & Media Avionics: Pilot Friendly

The FAA's rules for ADS-B "Out," the transponder-like signals that identify each aircraft in the satellite-based system, are set in stone. 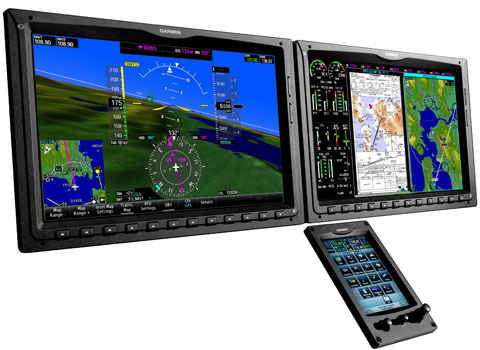 As the first truly integrated avionics suite made for light general aviation aircraft, the Garmin G1000 has been a game-changer for eight years—an eternity in the rapidly changing avionics field.

The two-box PFD/MFD was quickly adopted by aircraft ranging from Cessna 172 trainers to corporate jets, and pilots who mastered the complex combinations of buttons, knobs, and soft keys could unlock the tremendous power of the pioneering system. GPS-derived synthetic vision, highway-in-the-sky symbology, and flight control enhancements meant to avoid unintentional stalls and spirals (electronic stability and protection or ESP) all sprang from the G1000 platform.

Now, Garmin’s G2000 is about to enter the new-aircraft marketplace through its launch customer, Cessna (and its single-engine Corvalis TT). And Garmin is trying to convince other manufacturers of high-end piston aircraft to adopt the new avionics suite, too.

Outwardly, the G1000 and G2000 have many similarities. They’re both PFD/MFD combinations driven by a single AHRS, air data computer, and magnetometer, and many of the internal components on the G1000 and G2000 are interchangeable. But there the differences end. The G2000 has larger screens (14 inches diagonal instead of 10.4), and gets its commands through a touchpad flight management system, or FMS (which the company calls a Garmin Touchscreen Controller, or GTC) that contains colorful and intuitive icons. The G1000’s myriad buttons, knobs, and soft keys are almost completely gone (except for a lone dual concentric knob for those of us who find knobs comforting). The keypad uses infrared sensors (rather than pressure or electrical current) to detect finger touches, and that technology minimizes errant strokes and allows pilots to use it while wearing gloves.

The symbols on the keypad itself are nearly identical to Garmin’s touchscreen GTN 600/700 series of GPS/comms, and the operating logic is unaltered. There’s a Home key that can bring pilots swiftly back to the starting screen, and a Back button that lets us undo the last wrong thing we did.

I recently got to fly with the G2000 in a single-engine Cessna that Garmin has been using as a test vehicle, and Grant Wittenborn, a company flight test engineer, patiently led me through the process.

The first thing pilots are sure to notice is the significantly larger display size of the 14-inch screens. Equally noticeable is the improved screen resolution that comes from a higher pixel count, and improved map drawing software allows for a refresh rate the company says is five times faster than the G1000. 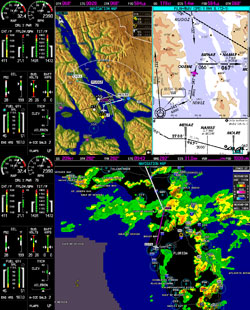 A split-screen multifunction display (MFD) allows the G2000 to show as much information as a three-screen system. The MFD (top) displays a moving map as well as a georeferenced approach plate. The satellite datalink overlays XM weather on the full-screen moving map (above).

The touchscreen FMS uses many of the same symbols as the GTN series (and Garmin’s aera line of portables), so it’s not intimidating for first-time users familiar with other Garmin equipment.

“Just touch what you want to change,” Wittenborn said as we prepared to launch from Runway 18 at New Century Airport (IXD), the company’s home base in Olathe, Kansas. A high overcast allowed for good VFR conditions, but not for long as a rain-, snow-, and lightning-filled winter weather system approached from the southwest.

I used the dual concentric knob to enter the ATIS and ground control frequencies (sorry, old habit), and then switched to the touchscreen for tower and all other radio tuning. Entering a flight plan was straightforward (the system uses an alphabetical keypad instead of a QWERTY keyboard), and a series of magenta and white course lines appeared on the MFD.

We had decided in advance to use the autopilot as much as possible and focus on programming the G2000 during the flight. So I preselected 3,000 feet as a target altitude and set Wichita’s Mid-Continent International Airport (ICT) as the destination. Pressing the Takeoff/Go Around button on the throttle lever brought up the flight director bars, and once we were airborne and climbing, a single touch of the AP button on the autopilot control panel allowed the magic to take over flying duties. A single press of the Nav button put us directly on course.

Even though the G2000 is a two-screen system, a split-screen function on the MFD allows it to behave like a three-screen system.

I split the MFD between the moving map (with XM weather that showed the colorful weather blob headed our way) and a georeferenced approach plate (showing the ILS approach to Runway 19L at ICT). Entering the approach was a simple matter of touching the Procedure key, selecting the approach, then loading and activating it—the exact same steps introduced more than a decade ago on the GNS 430/530 series.

Wittenborn was unusually quiet in the right seat and, rather than provide step-by-step instructions, he showed off the intuitive nature of the new system by assigning tasks and letting me find my way through them. Our first change of plans came when, instead of continuing to ICT, Wittenborn said to divert to nearby Ottawa, Kansas (OWI), and set up for a GPS approach to Runway 17 using vectors to final.

Unlike the G1000 (and GNS 430/530) which removes all but the initial and final approach fixes from the MFD screen once an approach is activated, the G2000 preserves the intermediate intersections. I put the autopilot in heading mode and armed the approach—and the autopilot information was displayed at the top of the PFD screen, just as on the G1000. We intercepted the final approach course at a sharp, 60-degree angle and the airplane rolled out precisely on course. Then the autopilot collected the WAAS GPS glide-slope and flew smoothly and precisely down to our preset minimum descent altitude while I jockeyed the throttle and set the prop, mixture, and flaps for landing. An aural warning system gave audible callouts at 500 feet and upon reaching minimums.

There, as briefed, we executed the missed approach—and the G2000 made this normally hectic phase of flight remarkably sedate. I simply pressed the go-around button and advanced the throttle. The autopilot remained engaged and followed the flight director command bars, the magenta line on the MFD showed the first leg of the missed-approach procedure. Simply pressing the Nav key allowed the autopilot to fly the entire missed approach and enter the hold. (In most G1000 installations, the autopilot disengages when the Takeoff/Go Around button is pressed, and automatic waypoint sequencing is suspended.) 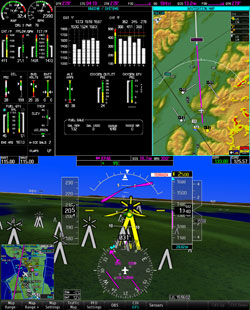 The G2000 MFD screen can be split (below) so that it offers two views; here it shows the engine page and moving map. The PFD screen (bottom) displays GPS-derived synthetic vision with color-coded obstacles designed to increase pilot situational awareness.

In addition to handling the flying chores through a built-in autopilot, the G2000 also allows pilots to control the intercom, heater, air conditioner, audio panel, and even video cameras (if installed) from the FMS screen.

We returned to Olathe and made a GPS approach to Runway 18. This time, the G2000 flew the entire approach starting at the initial approach fix. Despite a 27-knot crosswind at 3,000 feet, the autopilot crabbed into the wind and our ground track was arrow straight.

“Most of the pilots flying this system for the first time can work their way through an IFR approach with little or no coaching,” Wittenborn said. “We found that to be true in our human factors lab, and it’s also true in the airplane.”

After our flight, Wittenborn told a story of his 2-year-old son learning how to play Elmo cartoons on his dad’s iPad. After he mastered the trick, the boy kept walking to the family’s television set and pressing the screen, expecting to be able to command the TV to show his favorite cartoon.

I can relate—during our 30-minute flight, I had to resist the urge to reach out and touch the G2000 PFD and MFD screens with my fingers. The touch-screen FMS reinforces the habits the iPad, aera portables, and GTN series have already instilled. (Garmin offers an educational iPad app that simulates a GTN screen and allows users to practice hitting the right keys at home.)

The G2000 with its graphical, touch-screen FMS is simpler to use than the G1000 with its multiple layers of chapters, subchapters, pages, and subpages. G2000 menus are “shallower” and allow users to escape becoming trapped in digital dead-ends—good for those of us who don’t
fly glass-cockpit airplanes every day.

Garmin won’t say how much the G2000 costs since the company only sells it to new-aircraft manufacturers. It also won’t tell the price difference between the G1000 and G2000, so the value equation is impossible for regular consumers to fully know. The G2000 isn’t available for retrofit. But there’s no question the G2000 is a powerful avionics suite, and that it’s much friendlier to pilots than its predecessor.

The company also must overcome a built-in tension in its relationships with manufacturers for the G2000 to succeed in the marketplace. Garmin is seeking to standardize its products for greater efficiency, while manufacturers go to great pains to differentiate their products to potential buyers. For example, the Cirrus Perspective and Embraer Prodigy panels are both G1000s, but the aircraft firms have their own highly customized and branded user interfaces. Although Garmin is sure to offer software modifications for individual aircraft manufacturers, the company has invested heavily in its touchscreen FMS.

Garmin is aiming the G2000 at a narrow niche of high-end, piston aircraft. But it’s easy to see how the G2000 could be attractive to flight schools specializing in airline training because they could allow students to use an FMS throughout their training. And the G2000 is more than capable enough to take up residence in turboprops and jets—even though Garmin offers even more robust G3000 and G5000 systems for those aircraft types.

Add a touch-screen FMS to the list of things you never thought you’d see in a GA cockpit—but really liked once it got there.