Get the app Get the app
AOPA will be closed July 4th, in observance of the Independence Day holiday. We will reopen at 8:30 am ET on Tuesday, July 5.
News & Media Never Again

In 1952, with my four-year-old Luscombe 8E that I had just purchased for $800 - a lot of money for a recent graduate of officer candidate school at Fort Benning, Georgia - I was on cloud nine before I even took off from the grass strip at King's School of Aviation in Columbus, Georgia.

In 1952, with my four-year-old Luscombe 8E that I had just purchased for $800—a lot of money for a recent graduate of officer candidate school at Fort Benning, Georgia—I was on cloud nine before I even took off from the grass strip at King's School of Aviation in Columbus, Georgia.

Listen to this month's "Never Again" story: Xs, fences and cows. Download the mp3 file or download the iTunes podcast.

I had just filed a flight plan (by phone, of course) for a VFR trip to Lovell Field in Chattanooga, Tennessee. My final destination was to be the grass strip at Harrison, Ohio, my hometown. I only had enough daylight left to reach Chattanooga at a cruise speed of 105 mph with maybe two hours to spare. Sure, I could have waited until daybreak the next day, but I had a student certificate in my pocket and almost 30 hours logged (travelling alone) and I wanted to go now. Both Jack and Dean Allen King had told me that I was one of their better students, (now, they wouldn’t tell that to all their students, would they?), so I went.

The flight was beautiful. I arrived exactly as planned and made a perfect three-point touchdown for the first time ever on a concrete runway. What a rush! While refueling, and after closing my flight plan, I pored over my sectional and saw the symbol for an airstrip only 100 miles or so farther north, right on my route of flight. Looking at my watch, I decided I had plenty of time to spare to reach that strip. Why not take advantage of the beautiful weather and the perfect 10-knot tailwind, and spend the night sleeping in my Silver Bullet? So what if I didn’t have nav lights or more than a tower frequency in my crystal radio? I had landed just fine with the green light at Chattanooga, and I was sure that the airport ahead didn’t have a tower, anyway.

I climbed and circled in the rapidly waning daylight until I could hardly make out the ground. If there was another runway, someone had camouflaged it beautifully. I pulled out my chart, and, in the fading last minutes of light, I saw the symbol for an airport a few miles up the valley whose circle overlapped the railroad directly beneath me and heading north. 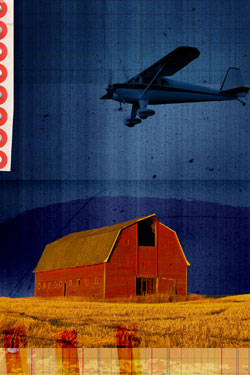 But hold on just a moment. In all the circling, am I heading north or south? Since I couldn’t quite make out the compass, I had to undo my seatbelt, and, leaning forward with my nose right on it, I could see the big “N” floating right where it should be. After settling back, I looked down and, of course, the railroad track was nowhere to be seen.

I remembered a tip my multiengine and multi-thousand-hour pilot Uncle John Calvert had given me. “If you ever find yourself flying at night and your radios go out, climb! As long as you can see lights in front of you, you’re OK!”

Climbing as fast as I could, calling “Mayday, Mayday!” on my one-crystal “radio”—in a pitch at least one octave higher than my normal speaking voice—I finally reached an altitude from which I could see the lights of two large cities. One was to my left at about 40 degrees and one at the same angle to my right. OK, the one to my left is obviously Louisville and the one to my right must be Lexington, which is on my course to Cincinnati. I will proceed to Lexington.

Then began my paranoia: A student pilot, flying an airplane with no lights and no nav instruments, who lands at a municipal airport at night, anywhere in the United States of America, shall be stripped of his license, his airplane, his commission, and what remains of his dignity. So be the judgment of this court, and if I had my way you would be paraded through the streets with a sign hanging around your neck reading, Idiot of the Century.

No way can I let that happen. The Silver Bullet is performing beautifully, I have at least two-plus hours of fuel remaining, and I can see lights in all directions. Perhaps a straight stretch of highway… ah, there’s one with just a few cars going in a straight line for at least a couple of miles…get down a little closer, drag the highway…hold it! There is a field beside the road!

I flared out a little high and thought I would never touch down, but I did, and rolled to a stop about 90 feet from a barn. After I had stopped shaking, I climbed out of the airplane and spotted a path leading through the trees to my left. I followed it down a little ravine, across a creek, and up the hill, and came out of a clearing to see an old farmhouse with the old farmer sitting in an old rocking chair puffing on an old pipe.

“I heard you circling around up there. You picked the only field within 40 miles of here level enough to land in. They been trying to get me to sell to put in a strip but I still got to think about it for a bit. Good thing you picked that field. I just cleared trees outa the one next to it, yesterday. Fulla stumps!”

I spent the rest of the night in a small hotel; paid the taxi driver to pick me up at daylight, and showed him how to give me a prop; took off; and landed without further event. More than 2,000 hours and five airplanes later, I still carry the memory of that flight. And I will also never forget my Boy Scout training, “Be prepared.”

Mel Calvert, AOPA 1078212, is a private pilot who lives in Batesville, Indiana. He is the author of How I Quit Smoking and Lived to Tell About It.