Get the app Get the app
AOPA Members DO more LEARN more SAVE more - Get MORE out of being a pilot - CLICK HERE
News & Media Wx Watch: The problem with pireps

Wx Watch: The problem with pireps

Let's get this out right up front: Pireps are a valuable source of information that can be indispensible for safe flight planning - and can help prevent weather-related accidents and incidents.

There is a ton of information out there addressing icing issues. But perhaps one of the most concise sources of advice comes from the Air Safety Institute (ASI). To view or download a pamphlet that touches upon virtually all the bases of this complicated subject, visit the website. You’ll see a 16-page document that covers everything from atmospheric conditions conducive to icing, to strategies for avoidance—and escape—to a discussion of ice-protection systems. And yes, icing pireps and intensity levels are also covered. It’s one of a series of ASI’s free Safety Advisors, brought to you by general aviation’s most comprehensive source of information and advice. 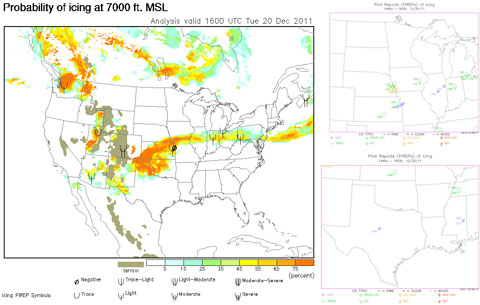 The automated digital data service (ADDS) website’s current icing potential (CIP) pages (above left) show a high probability of icing arcing north of a low pressure system over Oklahoma. However, the pirep symbols overlaid on the map show but two reports, both of them over eastern Kansas—one for light icing, one for negative icing. The CIP shown here is for the 7,000-foot level. Pireps are plotted on single-altitude CIP charts if they are within a 1,000-foot band above and below the posted altitude, and if they were reprted within 75 minutes of the chart’s valid time. This is good, because it validates the CIP information, but not so good because they are few in number, over-represent airliners, and a lot can happen in just a few minutes. ADDS’ pirep page (above right) shows reports from later in the day.

Let’s get this out right up front: Pireps are a valuable source of information that can be indispensible for safe flight planning—and can help prevent weather-related accidents and incidents. They should be checked before each flight, and rechecked for late-breaking news via Flight Watch on 122.0 MHz when in the air. That said, are there any problems with pireps, especially the icing pireps that most affect our winter flying? The answer is yes. While icing pireps may have value, there are some pretty serious caveats that all pilots should understand.

An icing pirep is a very fleeting thing. A pilot calls in an icing experience, but it takes time for the report to be published and read. In the meantime, the icing conditions reported may have worsened, or vanished altogether. On the other hand, the conditions may have remained the same, which is what you’d expect when clouds are widespread, associated with a well-defined weather system, and trackable by satellite imagery.

Another big problem has to do with cloud layers. Was the pilot making the pirep flying in a layer, and unaware of clear, ice-free conditions above or below? Conversely, was the pilot flying above or below layers, and therefore reporting ice-free conditions? Here’s where real-time mention of any layering would be of great help to pilots planning on climbing or descending in the area—but not all pilots include this information.

But as complete as it is, a pilot planning a flight out of, say, the Akron/Canton, Ohio, area with a takeoff time of 1500Z can’t count on the same conditions. This pilot doesn’t know if the conditions still persist at those altitudes, for example; if that altitude band was layered or not, or if the cloud tops were at 10,000 feet or higher. A lot can happen in an hour.

As it turns out, another helpful pilot in the vicinity did turn in a pirep with tops information, saying they were in the clear at 13,000 feet just a half-hour earlier. So there’s some confirmation on that one bit of data. But there were just three icing pireps in the entire Lake Erie region on the mid-morning in question (December 2, 2011). All of those were from regional airliners climbing to or descending from their cruise altitudes. And turbine-powered airplanes aren’t affected by icing in the way most piston-powered airplanes are, mainly because they have the deicing systems capable of dealing with some ice situations.

The solution to this data sparsity—to have more general aviation pilots flying in the lower levels of the airspace system, making tons of reports—presents obvious risks. For those of us flying airplanes not certified for flight into known icing (FIKI), one look at the sky and the thermometer and we’d stay on the ground.

But real-time or even near-real-time information on icing setups? Icing pireps can often fall short, even though they’re considered the gold standard for verifying forecasts. But they’re the best we’ve got, warts and all.

Another shortcoming of icing pireps has to do with pilot perceptions of intensity. The Aeronautical Information Manual (AIM) declares that icing intensities fit in four categories: trace, light, moderate, and severe. Go to the AIM’s Chapter 7-1-21 for the full passage on icing pireps.

To review, trace ice is defined as “just perceptible. Rate of accumulation slightly greater than sublimation. Deicing/anti-icing equipment is not utilized unless encountered for an extended period of time (over one hour).” Say what? This advice seems to go against the traditional warning to exit icing conditions as soon as they’re encountered. After all, if you stay in “trace” icing conditions long enough, you can build up dangerously large accretions.

Light icing’s definition wades a little further into the issue. This level of buildup “may create a problem if flight is prolonged in this environment (over one hour). Occasional use of
de-icing/anti-icing equipment removes/prevents accumulations. It does not present a problem if the [ice protection] equipment is used.” There’s the magic one-hour rule again, plus the assumption that ice protection equipment is aboard.

With moderate icing, the rate of buildup “is such that even short encounters become potentially hazardous and use of deicing/anti-icing equipment or flight diversion is necessary.” Only now is a diversion mentioned.

Severe icing is defined as being so bad that ice protection equipment “fails to reduce or control the hazard. Immediate flight diversion is necessary.”

You get the feeling that these definitions were made with larger, more complex, and powerful airplanes in mind—those that come with complete ice protection gear and FIKI approval. For the rest of us, all these intensity definitions boil down to just one recommended plan of action: Do everything you can to avoid icing, and escape it as soon as possible should icing be encountered.

Here’s where perception and judgment come into play. What one pilot may describe as light icing, another may call moderate. Complicating matters further is that different airfoils and airplanes accrete ice differently. Airplanes with smaller leading-edge radiuses (think Mooney) are much more efficient at collecting ice than those with big, fat, more rounded leading edges (think Piper Aztec). What’s more, areas of the airplane not covered by ice protection systems continue to accumulate. So although bleed-air or pneumatic deice leading edge panels may be free of ice, other parts of the ship (nose, vertical, and horizontal stabilizer tips, wing/fuselage junctions, antennas, et cetera) still pack it on. This creates a lot of drag, which slows the airplane, which in turn means a higher angle of attack in order to maintain altitude, which in turn means building ice on the unprotected undersides of the wing, which in turn means higher stall speeds and unpredictable aerodynamic behavior. And this is with ice-protected, FIKI-approved airplanes!

So for most of us flying unprotected airplanes, the iron rule remains: If you see any ice beginning to form, immediately execute your escape plan. You do have an escape plan, don’t you? Maybe it’s to descend to a warmer altitude. Maybe it’s to perform a 180-degree turn. Maybe it’s to land immediately, if terrain and other variables permit.

Don’t have an escape plan should icing be a possibility? Then you shouldn’t have taken off in the first place. Anything but press on in icing conditions. And anything but apply AIM-think to any ice you may observe on the airplane. It’s disconcerting to think of a pilot in a piston single flying along with a bead of ice along his wings, thinking, “It’s just trace ice. I should be on approach into Spokane (or Buffalo, Traverse City, or other well-known ice boxes) in just 45 minutes, so I’ll be OK.” Fly in it long enough, and trace ice can become light, then moderate, then severe.