Get the app Get the app
AOPA Members DO more LEARN more SAVE more - Get MORE out of being a pilot - CLICK HERE
News & Media Direct to: Talk to your plane

Direct to: Talk to your plane

As if programming an IFR flight plan into a Garmin GNS 430W or 530W with the sound of your voice wasn’t easy enough, VoiceFlight Systems has shaved yet another step for Apple iPad users.

It sounds like a science fiction robot reading your flight plan at just over one waypoint—up to five phonetic letters each—per second. VoiceFlight Systems President J. Scott Merritt gave AOPA Online an exclusive first look at an iPad text-to-speech application, demonstrating how to copy text output from a program like ForeFlight into the new VoiceFlight application using iPad’s clipboard. Connect the custom audio cable (available, at cost, Merritt said, for $25 from VoiceFlight) to the pilot’s microphone jack, and a complex flight plan can be uploaded to the Garmin in seconds.

The VoiceFlight VFS101, seen here, mounts behind the instrument panel and measures three inches by five inches by one inch, weighing less than a pound.

“All we’re doing is have iPad read it for you,” Merritt said.

The new application is expected to be available by the end of February as a free download from Apple.

Merritt’s plucky startup is pushing voice recognition technology into the cockpit faster than Garmin’s own effort, supporting one-step Victor airway programming of a 430W or 530W that would otherwise require an upgrade to a GTN 600/700 unit.

With a suggested retail price of $1,995 for the VoiceFlight unit, pilots now have a much less expensive alternative to a Garmin upgrade that achieves most of the functionality (excluding a touch-screen interface). 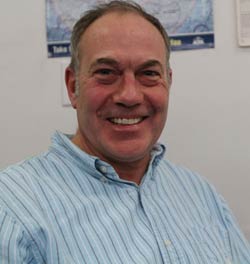 In January, VoiceFlight secured a long-awaited approved model list (AML) supplemental type certificate (STC) clearing the way for installation in most aircraft with a gross weight below 6,000 pounds. Installers, roughly 40 avionics repair stations authorized as VoiceFlight dealers, can now complete the job without requiring field approval from a flight standards district office. VoiceFlight is busy ramping up its production capacity and hiring new staff to tap into a vastly expanded market. About 120,000 Garmin 430/530 units have been sold, though VoiceFlight is currently designed only for installation with WAAS-enabled units.

Weighing less than a pound, drawing less than an amp, and requiring a space slightly larger than a deck of cards, the unit needs no panel space beyond a circuit breaker. It can be tucked behind the panel, out of sight. The patented voice recognition technology inside has been tested with a diverse array of pilots with different accents and voices. Exploring the capability of a bench model, it took real effort to trip the system up. Only with a concerted effort to mumble did the system finally draw a blank, following many unsuccessful attempts to confuse it. Mistakes made when entering waypoints—“juliet-echo-whiskey-india … zulu, err, tango”—can be quickly corrected with an “erase waypoint” command. Each waypoint in the flight plan can be selected individually, then activated by voice with the “direct to” function if air traffic control offers a shortcut. If a flight plan has to be significantly altered, the user can select a waypoint, use a voice command to “delete all following” waypoints, and input a new route in a faction of the time required by twisting knobs. 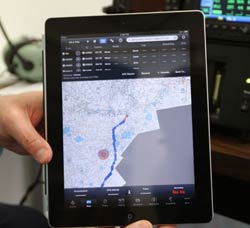 A new application for the Apple iPad, due for release this month, will allow pilots to have the iPad transfer a flight plan built in applications like ForeFlight, shown here, into a Garmin GNS 430/530.

All of this is accomplished through a standard headset, with a dedicated push-to-talk button that is generally mounted on the yoke next to its radio counterpart used to alert the VFS101 it is time to listen up.

Merritt has devoted a decade to developing VoiceFlight for the GA market, and is fielding requests to add support for other Garmin models, such as the G1000 or GNS 480 systems. Merritt said that is “under consideration,” but made no promises that will happen soon. VoiceFlight is meanwhile planning another appearance at Sun ‘n Fun, where the system was displayed prior to achieving the AML that clears the way for easier installations on most GA aircraft.