Get the app Get the app
AOPA Members DO more LEARN more SAVE more - Get MORE out of being a pilot - CLICK HERE
News & Media ADS-B traffic, weather now available in 51 terminal areas 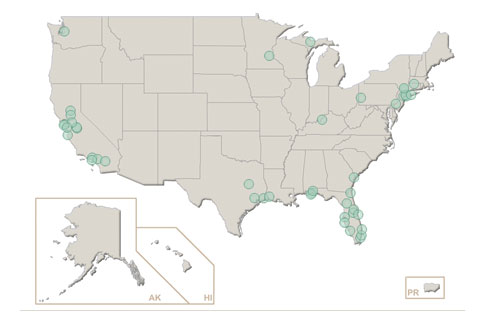 The FAA has activated ADS-B weather and traffic services, part of the NextGen airspace modernization program, in 51 terminal areas around the country.

Real time weather and traffic information is now available for free in dozens of terminal service areas around the country.

Flight Information System-Broadcast, or FIS-B, carries a full range of weather information including radar, pirep, METAR, TAF, and winds aloft data. Special-use airspace status, temporary-flight-restriction information, and notams are also carried over the same system. Aircraft must be equipped with a 978 MHz Universal Access Transceiver to receive FIS-B data. Traffic Information Service-Broadcast (TIS-B) data is available through both a 978 MHz UAT and a 1090 MHz Extended Squitter system, bringing real-time traffic information to a cockpit display to assist a pilot’s ability to “see and avoid” other aircraft. The FAA noted in its announcement that use of the TIS-B traffic information system does not change the pilot’s responsibility to “see and avoid” traffic under Part 91.

The FAA has produced an interactive map detailing the location and availability of various resources. The ADS-B services are now available in 51 terminal areas.

Users of the new traffic and weather services are encouraged to report any irregularities or disruptions, noting the time, location, aircraft type, description of the condition, and the type of avionics system and software version installed. Detailed information about the ADS-B system is also available from the FAA.