Get the app Get the app
Already a member? Please login below for an enhanced experience. Not a member? Join today
News & Media Pack as if your life depends on it

Pack as if your life depends on it 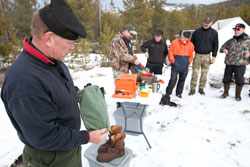 A single-engine aircraft crashed in the Montana wilderness, all four onboard were injured, and help won’t arrive for 36 hours: If you were one of those on board, would you have the survival equipment and proper attire to survive?

Commercial pre-packaged survival kits are available, but you can also build your own. The Surratt Winter Survival Clinic in Marion, Mont., in January helped pilots analyze what to pack in a survival kit and gave them a chance to practice with the gear they normally carry onboard the aircraft.

Retired Army Special Forces Master Sgt. Frank Bowen encouraged participants to “pack the things you would normally put in your personal and/or airframe survival pack.” For inexperienced survivalists, he included a suggested equipment list for starting a fire, building a shelter, purifying water, and signaling for hlp. 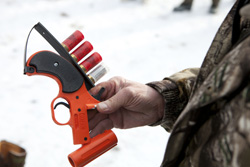 Some pilots who regularly fly over the rugged backcountry wear their survival kits in the cockpit. John and Tricia McKenna, president and administrative director of the Recreational Aviation Foundation, who had recommended the winter clinic, wear survival vests. This decreases the chances of forgetting the kit in the aircraft or of it burning in the wreckage before you can remove it; plus it’s already on you in case injuries limit your mobility. Vests can be purchased pre-filled with survival supplies, or a simple fishing vest can serve as the base to assemble one from scratch.

As a test, this novice camper tried to assemble a survival kit from existing supplies in her flight bag, car’s emergency kit, and house. The flight bag produced a flashlight and Leatherman tool; the car emergency kit added a flashlight with a flashing beacon and seatbelt cutter; and the house produced a first aid kit and a Paula Deen sauce pan (to use for boiling water or digging out snow)—still short of several life-saving tools to start a fire, chop wood, or sleep outdoors. After a trip to the store, the survival kit was rounded out with a flint and steel fire-starter set, cotton balls, petroleum jelly, water purification tablets, rope, tarp, a sleeping bag, thermal mat, and a machete. The trick was consolidating all of the survival supplies and extra clothing into a backpack. Doing so allowed the entire kit to be carried at once—backpack, sleeping bag, and thermal mat—even though it was an armful. 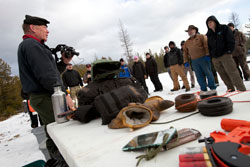 As for clothing, Bowen suggested, “Go with what your Mama told you if nothing else. Layers of clothing are good. Too much sweat is just as bad as getting rained on or taking an unexpected swim.” While some wore ski pants and jackets, others donned insulated coveralls and wool workwear. Insulated underwear, T-shirts, and flannel served as layers. Multiple pairs of gloves and wool socks, along with knit caps and one Russian fur hat rounded out the gear pilots came up with to brave the freezing temperatures for the outdoor weekend course.

With kits and supplies as varied as the participants’ personalities, Bowen encouraged everyone to practice with all of the different tools available to determine what would work best in a survival kit. Pack “what best fits your style,” Bowen recommended.