Get the app Get the app
Already a member? Please login below for an enhanced experience. Not a member? Join today
News & Media Aviation turns students' horror into passion 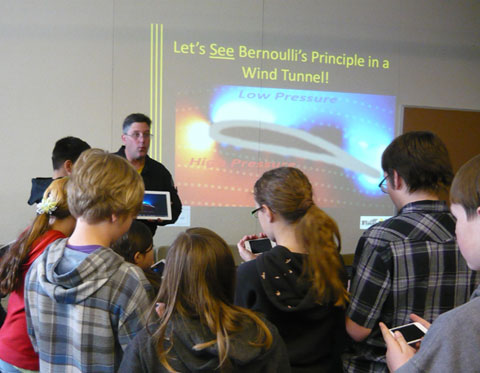 On a warm June day in 2010, a Piper Lance lifted off from Springerville Municipal Airport, elevation 7,055 feet, and struggled into the thin Arizona air.

“It flew straight over us,” recalled Weston Hogle, 13, now a student at the nearby Round Valley Middle School in Eagar, Ariz. Hogle and his family watched in horror as the PA-32R, unable to gain enough lift, plunged into the high school about a mile from the runway. A family of four on board was killed, and the high school set ablaze.

“It really started freaking me out about planes and stuff,” Hogle recalled.

Middle school teacher Carlynn Patton said the crash had a lingering effect on many local residents, young and old.

“Our community was filled with fear of flying,” Patton said. “When aircraft were heard flying overhead, kids ran for cover. As a teacher, I knew that I needed to do something to help our kids heal, but I had no idea what would help.” 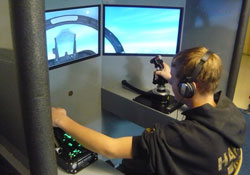 In October 2011, Patton met professor Eric Savage at a statewide science teacher's convention, and learned about First Flight Education, a company Savage launched nearly a year ago geared toward stimulating interest in science, technology, engineering, and math among middle school students. Using custom-made cockpits outfitted with flat screens and computer flight simulators, along with aerodynamic demonstrators and specially designed iPad applications, Savage had been touring the state teaching students about the forces of flight, basic physics, and air traffic control. Patton immediately set to work raising $1,200 to bring First Flight Education to Eagar. An email made its way to Jacie Ann Crowell, a pilot who overcame her own fear of flying, and a member of the AOPA President's Council.

Crowell flew to Eagar to take part in the three-day education program, one of several pilots who taught students how airplanes, and the National Airspace System, work Feb. 1 through 3. Parents were invited to a community night presentation, and students walked them through the simulators and demonstrations.

“I think it helped,” said Savage, who developed the curriculum with a goal of inspiring interest in science and technology. As an air safety investigator, pilot, and longtime aeronautics professor, he was keenly aware of the details of the accident (the NTSB determined the probable cause was the pilot's decision to launch in conditions beyond the aircraft's operating limits), and the special nature of this mission. “It also helped the parents to see the kids are sort of getting past it.”

Fear was replaced by excitement, and in many young minds a thirst for aviation was sparked. Crowell brought a multimedia package that included a wing walker in action.

“The minute they saw her, the whole table lit up,” Crowell said. 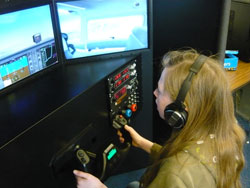 In an email, Patton said the program hit its mark.

“I type this with tears flowing because a ‘thank you' can never begin to cover our gratitude,” Patton wrote. “To move from a position of paralyzing fear to a position of excitement in three days is a herculean feat.”

Tristen Arnold, 14, also sees himself in a cockpit one day, flying in airshows. “Not only that, but teach other people how to do it,” Arnold said, adding that pilots are “role models.”

Patton, who organized and taught an aviation class during her prep period, hopes to expand the program into the high school. Crowell is ready to fund similar programs moving forward, keenly aware of the value of aviation education, and the difference it can make in people's lives.

“I'm totally committed to helping others learn and embrace aviation,” said Crowell. “If I have to be the person sitting at the dunk booth, I'll do it.”

Crowell said other pilots should make a point to visit Springerville Municipal, and spend some time in town. Offer a ride, and there will be takers.

“It's a very aviation-friendly community,” Crowell said. “The more people who can give a positive aviation experience, the better.”