Get the app Get the app
Already a member? Please login below for an enhanced experience. Not a member? Join today
News & Media Eurocopter upgrades tour helicopter 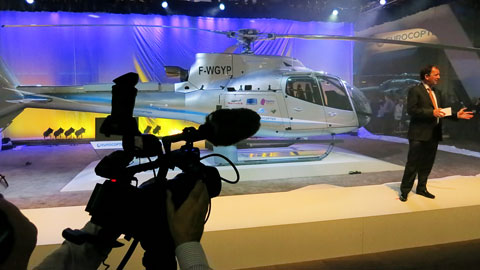 An upgrade of a helicopter used in a variety of roles but best known as popular with tour operators, the Eurocopter EC130 T2, has been unveiled at Heli-Expo in Dallas. Its special feature: air conditioning. One source knowledgeable of its development called it “an air conditioner with a helicopter built around it.”

Reportedly, passengers particularly on Grand Canyon tours had asked operators for better air conditioning, and Eurocopter officials promise the new model has it. The model begins its production run with 105 orders, including one from a medical transport company, proving that its role extends beyond providing tours.

It was based largely on customer requests. Other features include new energy-absorbing seats that improve weight and balance for passenger loading; integration of a crashworthy fuel tank; and increased maintenance accessibility for electrical and air conditioning systems.

The Turbomeca Arriel 2D engine, which provides 10 percent more average power than the EC130’s current powerplant, powers it. The Arriel 2D is used at its full-power rating of 952 shaft horsepower on the EC130 T2, and is the same engine that equips Eurocopter’s evolved AS350 B3e helicopter in a derated version.

Even with these enhancements, the EC130 T2’s external sound level remains within the rules for flights at America’s Grand Canyon National Park.

The powerful new air conditioner is an option, as is a tinted windshield and a right-hand sliding door.

The first EC130 T2 has logged 90 flight hours since its first flight in 2011, demonstrating excellent maturity of the new configuration for a certification scheduled this summer. Final assembly of the initial series production aircraft began last December at Eurocopter’s Marignane, France, facility. By the second half of 2012, production will transition completely to the EC130 T2 version.

To date, Eurocopter has sold a total of more than 400 EC130s in its various versions.