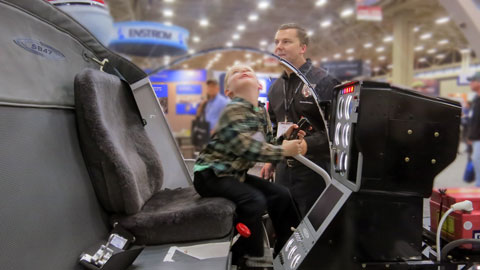 One of Bell Helicopter’s most reliable helicopters ever, the Bell 47, is in the process of returning to the market. Scott’s Bell 47, a Le Sueur, Minn., company, plans to offer the helicopter first as a restored model and later hopes to place it in production. Two restored models were shown on the floor of the Heli-Expo in Dallas Feb. 12.

The two piston-engine models shown, one equipped as a utility rotorcraft and the other in executive configuration, did not yet have the needed supplemental type certificate for new avionics, but can fly with the original panel design. It may take until 2013 to win the necessary type certificates. The company has six additional Bell 47s awaiting refurbishment.

There was strong interest in the 1950s-era helicopters on the convention floor. Older readers will recall the helicopter was featured in a movie and television series, M*A*S*H , depicting events during the Korean War. The refurbished aircraft will be offered by Scott’s Bell Inc. The company makes spare parts for the Bell 47.

“They’re flying trucks, built like tanks,” said Chris Meyer, general manager for Texas Helicopter Co. “They’re no speed demons, going 75 to 80 knots,” he added. The newly refurbished helicopters will be aimed at the trainer market. The utility Bell 47 is offered at $311,000, while the one with the executive interior and Aspen glass cockpit is $367,000. The models restored are the Bell 47 G2A and the G2A-1.

They make safe trainers, according to Neil Marshall, general manager of Scott’s Bell 47, because the blades have lots of inertia. That means they keep turning in the event of an engine failure, and have been known to safely autorotate to the ground, land, rise back and turn 180 degrees, and land again despite the lack of engine power.

Part of the restoration plan hinges on the availability of engines. The Bell 47 uses the Lycoming VO-435, generating 220 to 240 horsepower. An STC allows the use of the 265-hp Lycoming VO-435-A1F. One of the helicopters now offered for sale was used as a military trainer, while the other had been an agricultural spray helicopter.

In 2010, Scott’s Bell 47 bought the type certificate for the model.