Get the app Get the app
Already a member? Please login below for an enhanced experience. Not a member? Join today
News & Media IFR Fix: A show of hands

IFR Fix: A show of hands 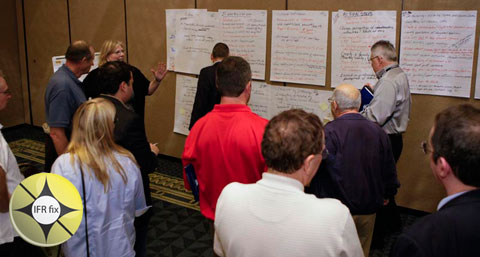 Has this happened to you? You attend an aviation safety meeting at the local FBO. The moderator thanks everyone for coming and states that just by showing up, you have demonstrated your safety consciousness. That alone, she says, places you in a pilot-population subset considered statistically less likely to have an accident.

Nice thought—and it gets the proceedings started on an upbeat note. It also makes you glad that you dragged your low-flying, scud-running buddy along.

Next the moderator might present a flight scenario, asking for a show of hands from the audience on what course of action to take. That’s always an enlightening moment. In the ensuing discussion, pilots are delightfully unrestrained about diving in with opinions and tales.

IFR Fix readers also dive in. When asked for an online show of hands, the responses have brought out an enlightening sketch of the attitudes and activity levels of pilots concerned with IFR. The polling isn’t scientific research that uses rigorous sampling methods. Questions are simply posed and answered. Observation seems to show that the results of a given poll stabilize after a few hundred responses come in. You can pretty much “call the race” at that point, as TV networks do with their exit polls on Election Day.

What does the emerging portrait reveal? Perhaps a syllabus for recurrency training. Here are some snippets of the data:

About 82 percent of 1,235 pilots felt they needed to brush up on lost-communications techniques before flying IFR again.

Three percent said they would fly an unfamiliar, buggy aircraft in an IFR scenario; 56 percent would opt for a road trip. The rest might fly it under VFR.

Breaking out on an approach with a 20-knot tailwind and a very long runway ahead, 53 percent would land straight ahead; the rest preferred circling to land.

Thirteen percent of rated readers acquired their instrument tickets with no experience of IMC. Many had “just enough to get a taste.”

A pilot performing less than superbly on an instrument proficiency check still would have been “signed off” by 67 percent of readers.

Probably one thing all of us can agree on is that we should keep attending safety meetings—and bringing our low-flying, scud-running buddies along.