Get the app Get the app
AOPA will be closing at 1:45pm ET on Tuesday, December 6th. We will reopen Wednesday morning at 8:30am ET.
AOPA Members DO more LEARN more SAVE more - Get MORE out of being a pilot - CLICK HERE
News & Media Fuller: Keep flying, we're fighting for you

In recent years, general aviation has faced some of the toughest challenges in its history, including a severe economic recession, a dwindling pilot population, and numerous legislative threats. The best action pilots can take to keep GA healthy is to get in the air and fly, AOPA President Craig Fuller told attendees at the Northwest Aviation Conference and Trade Show in Puyallup, Wash., on Feb. 25.

“We want to keep pilots flying in the face of some significant challenges,” he said.

Fuller outlined numerous steps the association is taking to protect GA and help keep pilots in the air.

A view from the Northwest

The skies may be gray in the Northwest, but the prospects for general aviation are sunny, AOPA President Craig Fuller reports from the road. During his trip to the Northwest Aviation Conference and Trade Show in Puyallup, Wash., Fuller met with pilots and aviation leaders from Washington, California, Oregon, Idaho, Montana, Utah, and more. Read more >>

AOPA conducted a study of the flight training industry and learned that as many as 80 percent of those who start flight training do not earn a pilot certificate. During the study , key criteria emerged that play a role in student retention. Now, AOPA is sharing the information with the flight training community “to help schools and instructors recognize what works and put that knowledge to use in their own businesses,” Fuller said.

He also introduced the AOPA Flight Training Excellence Awards, a new program that recognizes flight schools and instructors that “do it right,” and the MyFlightTraining website designed specifically to help student pilots through the training process. Students can use the site to log milestones, receive customized information for their point in training, and ask questions to the experienced flight instructors in AOPA’s Pilot Information Center.

Getting pilots back in the air 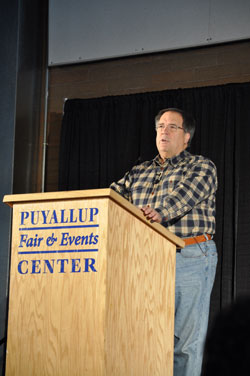 AOPA, in conjunction with the Experimental Aircraft Association, is working to extend to all pilots the ability to fly 180-horsepower or less single-engine four-seat aircraft without a third-class medical certificate. An estimated 56,000 aircraft would be eligible to be flown under the request.

“ Our proposal would give pilots who fly recreationally in certain types of aircraft the option of getting a third-class medical or participating in recurrent online training that will teach pilots how to self-certify their fitness to fly,” Fuller said.

Another aspect of increasing the number of active pilots is getting those who have stopped flying back in the left seat. Last year, the association launched the AOPA Aircraft Partnership Program to match co-owners, making owning an aircraft a reasonable proposition for more pilots. So far, more than 10,000 participants have signed up for the program.

For the first time since 2007, the FAA now has stable long-term funding. But, AOPA has many other battles on its hands, including preventing the $100-per-flight user fee for turbine general aviation and commercial operations. The user fee continues to surface with each budget proposal from the Obama Administration.

“Our friends in Congress have repeatedly said that user fees are ‘dead on arrival’ and we will work closely with them again to try to put a stop to this latest user fee plan,” Fuller said.

While AOPA continues to fight for pilots, Fuller challenged the audience to get involved and help GA through this rough period. The industry has weathered worse days, for example, when people wanted to ground GA during World War II.

“The Army Air Corps was struggling to recruit pilots,” Fuller explained. “They came up with a great slogan that eventually turned into a hit song and even the title of a hit movie: Keep ‘em Flying. The idea is still relevant today.”