Get the app Get the app
AOPA Members DO more LEARN more SAVE more - Get MORE out of being a pilot - CLICK HERE
News & Media Stricken P-51 lands with help from a legend: Bob Hoover

Stricken P-51 lands with help from a legend: Bob Hoover 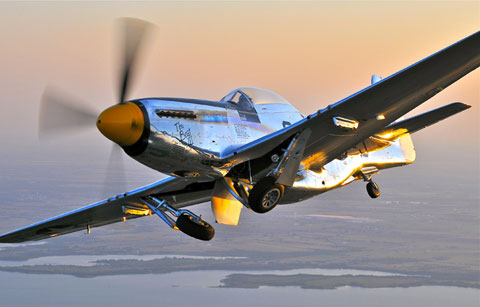 The North American P-51 known as “The Brat III,” owned and operated by the Cavanaugh Flight Museum in Dallas, escaped damage Feb. 26 following a landing gear malfunction. The aircraft is pictured here on a previous flight. Photo courtesy of Scott Slocum.


Circling above Mobile, Ala., on Feb. 26 with the left main landing gear of the vintage P-51 stuck halfway down, pilot Chuck Gardner calmly worked the procedures. When that failed to produce the desired result, a little advice from fellow aviators—including 90-year-old aviation legend Bob Hoover—proved helpful.

Gardner, with a passenger on board, started a conversation with a fellow pilot on the radio, who relayed messages to and from Doug Jeanes, the director of the Cavanaugh Flight Museum, who answered the troubling phone call in Dallas. The museum is touring “The Bratt III,” a World War II combat veteran, and has owned the vintage P-51 for about 20 years, including eight years spent restoring it.

Landing with one of the main wheels more horizontal than vertical was not an appealing option for the pilot, passenger, or owner. After picking the brains of various pilots, it occurred to Jeanes that Hoover, whose storied career included many flights in a P-51, might have something to offer.

“Chuck had really tried just about everything,” Jeanes recalled.

Hoover, a veteran military, airshow, and test pilot, spent decades as the official starter of the Reno Air Races, guiding pilots into line abreast with his P-51, then announcing “gentlemen, you have a race” as he pulled up to circle above the contest. If an airplane got into trouble, as they often did, Hoover would form up on the wing and talk the pilot through it. 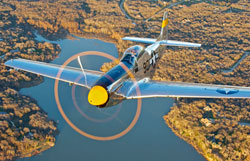 “Somebody would have a problem almost every other race, and over the years I must have talked down 30 or 40 airplanes that were in real trouble,” Hoover said in a telephone interview. “As a test pilot, I had more experience, probably, than most people.”

Hoover also had experience with a very similar problem—twice over. First in World War II, and later at the Transpo ’72 airshow at Washington Dulles International Airport, Hoover had to land a Mustang on one wheel. In 1972, Hoover explained, the up lock failed to release, and there was no hope of extending both wheels. He put the old warbird down on one leg, walking away uninjured, but the aircraft required extensive repair following the inevitable prop strike.

On Feb. 26, Hoover said, the main wheel was not locked inside the fuselage, so he encouraged Gardner to keep trying a couple of promising maneuvers: an abrupt pull-up that could dislodge the gear with G forces, and a hard yaw to bring the force of the slipstream to bear on the stuck gear assembly.

“Boot enough rudder there at landing gear down speeds, get a side load on it, it would force it out and into the locked position,” Hoover said. “I’ve been there, I’ve done that a couple of times.” 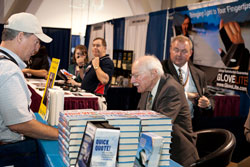 Jeanes, on the phone from Dallas to Hoover in Los Angeles, encouraged Gardner to keep trying the maneuvers over Mobile Bay. “Just slip it, skid it, yaw it, whatever you have to do to get some air under the door.”

After about an hour of maneuvering, the landing gear dropped at last into the down and locked position, and a smooth landing followed (with fire engines waiting just in case).

Jeanes said the problem was caused by a bad valve which controls the pressure in the shock and strut assembly, preventing the strut from fully extending. Fortunately, the P-51 had departed with plenty of fuel on board.

“Everybody was real calm. Nobody was panicking,” Jeanes said.

The Mustang will continue its tour, with a stop planned at Sun ‘n Fun. Rides can be arranged for $1,995.

Hoover said he was happy to lend his experience to a pilot in a pinch—again.

“I was so pleased we could save the airplane, or that I … had anything to do with it,” Hoover said.

Listen to the Audio

Author Jim Moore speaks about the story, and interviews Bob Hoover in this entry.