Big airplane for a big guy 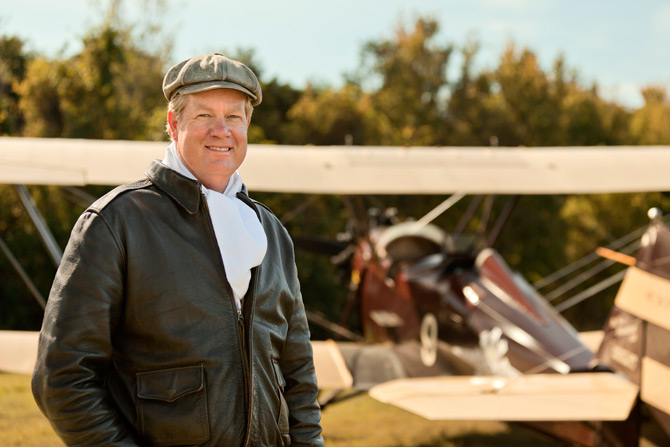 The oversized biplane waddles off the grass strip, slips up onto the paved ramp, and does a surprisingly graceful half-turn before coming to rest in front of a shade tent beside the perimeter fence. On closer inspection it becomes apparent just how big this baby is. The upper wing spans an impressive 45 feet. Built in the roaring 1920s, before aviation’s Golden Age introduced sleek lines and jaw-dropping speed, the New Standard D–25 is a sight to behold with its mass of struts and wires bracing the airframe. Four passengers climb down from the front cockpit. A family has just experienced open cockpit flying for the first time—together.

The airplane is owned and operated by Waldo Wright’s Flying Service in Polk City, Florida. It was built for barnstorming, and that’s exactly how it’s being used today. This flying time machine is oversized in every dimension, which is why the whole family can clamber up the lower wing, step into the gaping front hole, and strap in for an adventure. “We had three generations of one family fly with us yesterday,” says ground operations chief Jill Manka. “It’s really something to make it possible for a father, a son, and a grandfather to all fly together like this.”

The flights take place at low altitude. The airspeed indicator, which is a low-tech Johnson type attached to a wing strut, rarely exceeds normal highway cruising speeds. Visibility out the front is good. The scent of oil mixed into the breeze coming through the prop makes the experience reminiscent of the time period when the New Standard was considered a new aircraft.

As the propeller winds to a stop and the soft ticking sound of heat escaping the cylinder heads replaces the mechanized marvel of the 225-horsepower Wright model J-6-7 radial engine up front, Waldo climbs out of the rear cockpit—and he is as oversized as the airplane he flies.

At six feet, 10 inches tall, Waldo is a giant of a man. He holds his right hand high, encouraging young riders to, “Slap me five, man!” The children either jump in a vain effort to reach his hand, seven and one-half feet off the ground, or marvel at the size of their pilot in silent awe.

“I wanted a biplane I could fit in,” Lock said. The New Standards are big enough to fill that bill.

Waldo Wright is a character, the invention of Rob Lock, a native Californian who relocated to central Florida in order to continue and expand on what can only be described as a peculiar professional history. Although he is in his mid-40s, Lock appears younger—possibly because he still carries himself like a deluxe version of a California surfer. He’s tall, blond, decidedly casual, and surprisingly open as he discusses his earliest memories of aviation. “I didn’t really like flying,” Lock said. “I didn’t like the turbulence.”

The son of an aviation mechanic and pilot, Lock recognizes how fortunate his upbringing was. “You know, when I was a kid my dad took me to Chuck Yeager’s house,” said Lock. He accompanied his father to deliver an airplane that Yeager was borrowing from another pilot. He recalls meeting the iconic test pilot, as well as Glennis Yeager, the woman who is immortalized on the nose of the X–1 rocket plane. He remembers seeing the Collier trophy in the corner of the Yeager’s modest home, too. As he told the story to his friends around school, the word spread to the administration. That landed him in the principal’s office, where dubious adults were slow to accept the possibility that a 10-year-old kid who claimed to have been visiting one of the most acclaimed test pilots in the world might be telling the truth. In a phone call to Lock’s parents, his father told an incredulous administrator, “Actually, he was there yesterday.” 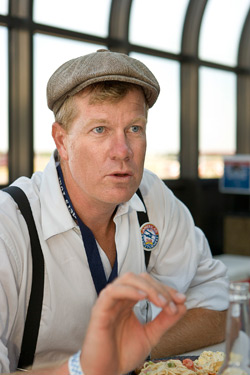 Lock can also remember playing in the bones of a dilapidated Stearman when he was 6 or 7 years old. It was a rusted and battered pile of parts then, sitting in the corner of the family hangar in California. “My grandfather helped build the wing ribs for that airplane,” said Lock. After years of part-time effort, the Stearman took shape and ultimately returned to flying. Today it sits on the ramp in Polk City beside Waldo’s two New Standard biplanes. “That airplane gave me the experience I needed to do what I do today.”

Hauling passengers aloft in an open-cockpit biplane isn’t a run-of-the-mill occupation. But then, Lock has never been an average guy. Prior to owning and operating the largest biplane ride business in the United States, Lock made his living in the fast-paced, elbow-throwing, sneaker-squeaking business of basketball.

“The two things I wanted to do when I was a kid: I wanted to play in the NBA, and I wanted to be a commercial pilot,” he said. “I got to do both. Lucky, I guess.”

Lock was a standout basketball player in high school. In the summer after his sophomore year his skills on the court became apparent. He was invited to attend a basketball camp in Santa Barbara, California, called Superstar Camp, where college scouts gathered to see the best West Coast players. Most of the nearly 200 players there were going to be seniors, while Lock was just preparing to enter his junior year. “I would look up into the stands and see all these college coaches there, like Dean Smith [University of North Carolina], and John Thompson [Georgetown University], and I was just like, ‘wow!’” He composed himself and by the time the camp wrapped up, Lock had been named to the All-Tournament team.

“Toward the end of the week I called my father and he said, ‘You have a bunch of mail here.’” Lock came home to 20 letters from colleges across the country. “At that point it was like, I’m going to go get a scholarship and go play basketball.”

Lock attended the University of Kentucky on a basketball scholarship. He graduated with a degree in marketing, and took the next step into playing professionally after school. In 1988 the Los Angeles Clippers drafted him. He went fifty-first, in the third round of the draft. “I had to guard guys like James Worthy [Los Angeles Lakers], Bill Laimbeer [Detroit Pistons], and Larry Bird [Boston Celtics].”

After the NBA, he spent eight years playing in the European leagues, where he found himself competing in Italy across the court from players like Joe “Jelly Bean” Bryant, the father of Los Angeles Laker Kobe Bryant.

Lock hung up his sneakers at the relatively youthful age of 30. After nearly a decade of living on a separate continent from family and friends, he was ready to come home. “Sometimes it’s time to move on in life,” he said. 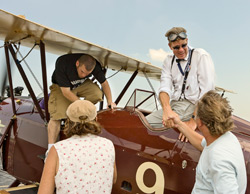 With his all-American good looks and big build, Rob Lock easily adapts to the role of his character “Waldo Wright” and to his big New Standard biplane, both of which fly passengers back to a bygone era.

Through it all, aviation remained a focus. “When I first started playing basketball, I started buying airplanes,” Lock said. First he bought a Waco, then he bought another, and then a third. That led to the purchase of the two New Standards.

Lock had never actually seen a New Standard when he bought the two restorations that he’s based his company on. He knew the front cockpits had room for four passengers, which would make them the perfect machine for hopping rides. His first impulse was personal, not professional. “I wanted a biplane I could fit in,” he said. The New Standards are big enough to fill that bill. He fits just fine inside the pilot’s roomy rear cockpit.

During a 1996 trip to Sun ’n Fun in Lakeland, Florida, he saw a New Standard in the air, hopping rides from the grassy infield. That experience flipped the switch, and Lock began an eight-year-long restoration process that brought both of his basket-case New Standards to like-new condition.

He isn’t finished yet, though. After finding a set of classic Edo floats and buying them, Lock found one of a handful of remaining Travel Air E-4000s and sent it through a complete restoration. The floats have now been mated to the Travel Air, which allows Waldo Wright’s Flying Service to provide its customers with something that hasn’t existed in the general aviation marketplace for a long while—anyone care for an open- cockpit biplane ride off the water? The Travel Air sports a cozy two-passenger front cockpit, so you can take someone special along.

In explaining to a potential customer the difference between their flight to Florida in an airliner and the experience he can share in the New Standard, Stearman, or the Travel Air, Lock says, “That’s transportation, this is flying.”

Waldo Wright’s Flying Service is located in central Florida halfway between Tampa and Orlando. Visit the website for more information.

Jamie Beckett is a writer and flight instructor living in Winter Haven, Florida. 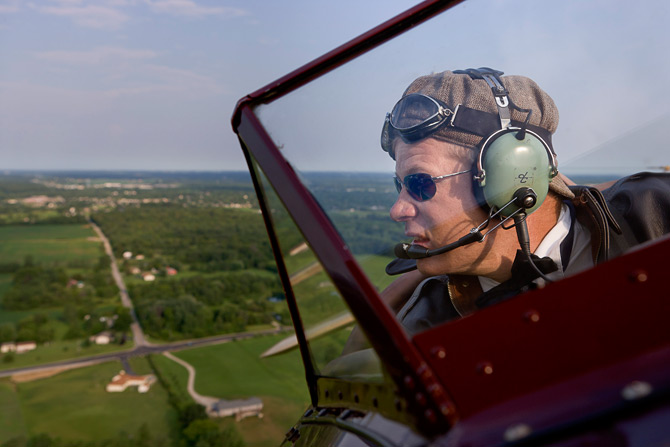