Thwack! My friend David smarted as I slapped his hand with the admonishment to never touch "my" radios. As an instrument pilot and good friend, he had assumed he was competent to help with the flight by managing some of the communications and navigation. When we landed I told him of the experience that led me to the notion that the pilot in command owns the radios, and nobody else should touch them without explicit permission.

Thwack! My friend David smarted as I slapped his hand with the admonishment to never touch “my” radios. As an instrument pilot and good friend, he had assumed he was competent to help with the flight by managing some of the communications and navigation. When we landed I told him of the experience that led me to the notion that the pilot in command owns the radios, and nobody else should touch them without explicit permission.

The flight that led to this conclusion had taken place many years earlier. Another friend, Bob Lieb, and I decided to fly his new Cessna T210 from Orange County, California, to a football game in South Bend, Indiana. We each had fresh instrument ratings, and single-digit solo time in actual conditions.

Listen to this month's "Never Again" story: Don’t touch the radios. Download the mp3 file or download the iTunes podcast.

Everything went according to plan, with an overnight in Albuquerque and clear skies all the way to Iowa. We planned a fuel stop outside of Des Moines and had filed IFR because the weather was threatening. Sure enough, as we approached our destination, the clouds appeared and we were talking with ATC.

Although it was an early fall day, we were pleased that there were no thunderheads in evidence and little turbulence at our assigned altitude of 9,000 feet. We slid into the IFR routines with little difficulty, our attitudes a mixture of newbie excitement and palms beginning to perspire.

This was a nonradar environment, so we were following airways and making position reports. With our dual VOR setup we tracked the airways easily, and our time to waypoints was very predictable. Bob was doing all the flying by hand, seemed to have things well under control, and I was managing the radios. Fortunately, there was very little traffic in the area.

As we neared the airport I set the radios for the VOR approach, with one tuned to the approach course, and the other set for cross-fixes on our position. The clock was our other primary navigation instrument.

At 4,000 feet we were cleared for the approach and turned to intercept the inbound radial. Bob picked it up with ease, and we were on our way. The controller mentioned a transport aircraft following us, but our speed was fine, and no one saw a problem.

So here we were, full IMC, in a nonradar environment, in unfamiliar territory, two brand-new IFR pilots—and completely lost.

The first hint of trouble was when the controller made repeated requests to know if we had reached our approach fix. We hadn’t, and told him so. He was becoming a bit agitated that we were flying so slowly, and several times he mentioned that a larger aircraft was approaching us from behind. When we checked, everything was fine, with all needles centered and only the clock giving us a puzzling message.

Finally the controller lost his patience and asked us to confirm our location, because we should have had seen the airport by now. That was when I asked Bob which VOR instrument he was following. He said, “Well, the lower one, of course.”

Fine for him to say, but I was trained to fly the upper one, and I had put our inbound radial there. The lower instrument was tuned to the crossing radials we were using to establish our distance from the airport.

So here we were, full IMC, in a nonradar environment, in unfamiliar territory, two brand-new IFR pilots—and completely lost. Thank goodness Iowa is relatively flat. If this had happened in California we probably wouldn’t be here to tell this story.

We adjusted our radios quickly, admitted out mistake, aborted the approach, and climbed quickly. The controller was a gentleman, and didn’t make us feel any more stupid than we already felt. He cleared us to the VOR, we made the correct approach, and all ended happily. 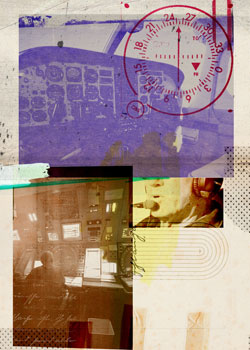 But the lessons remain with me to this day. Without an absolutely bulletproof protocol in place, only the pilot in command should ever touch a radio that matters. He’s the one who knows what needles or images he’s following, and he needs to know what inputs are going to them. Sometimes I now tell a friend that such-and-such is “his” radio, and he is welcome to do with it what he wishes. But “my” radios are sacrosanct, and only the pilot in command touches them.

We were saved that day by the flat terrain, an astute controller, and the lack of traffic. Those favorable conditions won’t always be there, but the rules of my cockpit will.

Tim Haidinger has instrument instructor, multiengine, and commercial ratings, and 1,500 hours. He flies a Cessna T206 throughout the western United States from its base in San Diego, and occasionally takes it across the country.