How a hot air balloon looks from above and photographed from a Piper Super Cub. A hobby becomes a sideline Dave Tunge is, at age 66, moving into the “do what I want to do” portion of his life. 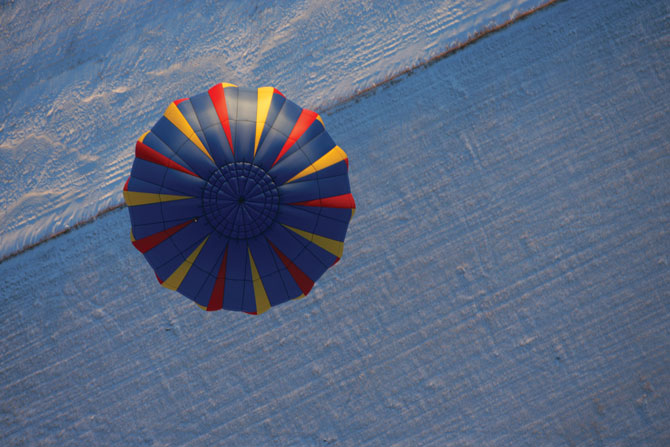 How a hot air balloon looks from above and photographed from a Piper Super Cub.

A hobby becomes a sideline

Dave Tunge is, at age 66, moving into the “do what I want to do” portion of his life. He turned from crop spraying and corporate flying to photography, backed it up with a retail store to pay the bills, and takes aerial photographs for hire in a Piper Super Cub he loves more than any other.

“I want the hobby to pay for itself, but I want it to stay fun,” he said. “I don’t want to turn it into work.” So far, Dakota Aerials in Yankton, South Dakota, has provided more fun than work. He specializes in aerial scenes of construction projects but has won awards for art shots as well. It all began when he took shots on speculation and then went door to door, from corporation to hospital building project, and sold most of the shots he framed.

He got the bug when a college friend’s dad used an airplane to carry the students to school. It bit so badly he quit college to fly, becoming a Cub dealer at one point when Cubs were needed in Alaska to build the oil pipeline. The one used for his aerial work is a Cub he rebuilt in 2000. Flying comes second nature to him, so he feels he has the experience to fly with his knees when he has to while shooting pictures through the open cabin doors. That experience totals more than 20,000 hours. He also owns a V-tail Bonanza.

Tunge flew the Cub 120 hours last year, taking only the pictures he wanted to take. As for equipment, he has a Garmin 496 portable GPS in his aircraft. When asked to take a picture, he gets latitude and longitude from Google Earth, plugs them into his GPS, and flies directly to the destination. Photography equipment includes a Canon 5D Mark II that does most of his work, and a Canon 1DS Mark II. He uses professional-level zoom lenses.

Many companies over the years have promised supersonic business jets, with most of them announcing a search for funding and manufacturing partners, and then growing silent. But none has ever promised hypersonic flight before, although HyperMach Aerospace does admit it is looking for funding partners.

The firm wants to build the Mach 4.0 SonicStar, an aircraft that could leave London at 9 a.m. and arrive in Los Angeles in time for the 20 people aboard to eat a second breakfast. (It was previously announced as a Mach 3.6 airplane.) It could make its first flight in 2021.

Founder Richard Lugg says the British-based firm has a better chance at success than most because it has discovered new engine technologies as well as a way of defeating the sonic boom. The FAA is unlikely to allow an aircraft that makes a sonic boom to cross the United States. It’s just a matter of physics, says Lugg, and his aircraft will project a beam ahead of the aircraft that parts the air, allowing it to slip past without a boom.

No doubt the Quest Kodiak is a ruggedly handsome airplane with loads of character, but we at AOPA Pilot were so surprised that readers selected it as our top magazine cover of 2011—and that it took an amazing leap on the Sunday of the poll—that we had to find out why.

It turns out the turbine-powered heavy hauler designed for Christian missionaries performing dangerous, unglamorous work in some of the world’s most remote places has won some devoted converts.

A few members of Quest Missionary Teams put out the word that their airplane was in the running for the AOPA honor, and their friends responded through social media and online prayer circles. Votes for the Kodiak from pilots and nonpilots alike flooded in from as far away as Australia, and the tough, reliable airplane surged from single digits to win the contest in a landslide.

“This wasn’t anything that we at Quest organized,” said Julie Stone, a spokeswoman for the Idaho firm that manufactures the Kodiak. “This effort was started and carried out by people who love the Kodiak and what it does. They are geographically diverse, but they’re connected—and they get things done.”

Thanks for voting—and beware the power of social media.

In an informal poll on AOPA Online we asked readers over the Thanksgiving weekend to tell us their favorite AOPA Pilot cover of 2011. A quick note also went out with that Friday’s ePilot, we noted it on the AOPA Facebook page, and editors Tweeted about the poll. We expected a modest response from those in a tryptophan coma but thought even a random sampling would give us interesting results and, as of Saturday, it was pretty clear what the favorites were. Then something happened (see “Leap of Faith”) and by Sunday a new leader had emerged. 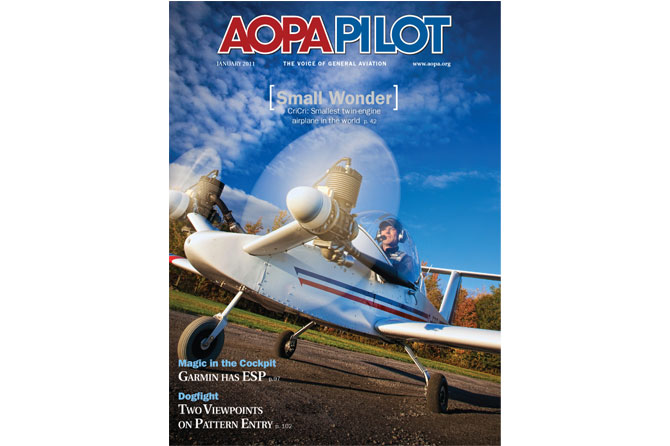 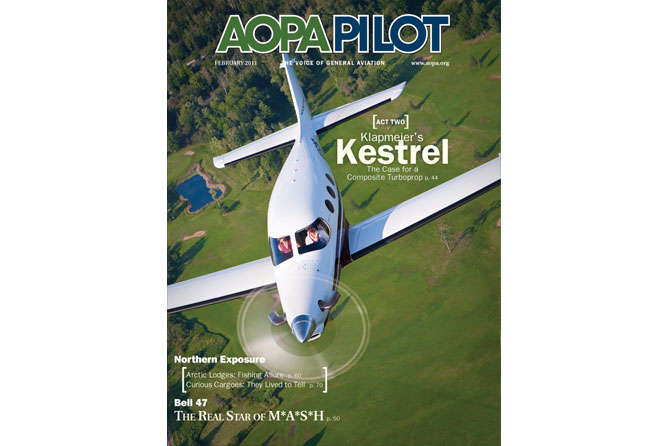 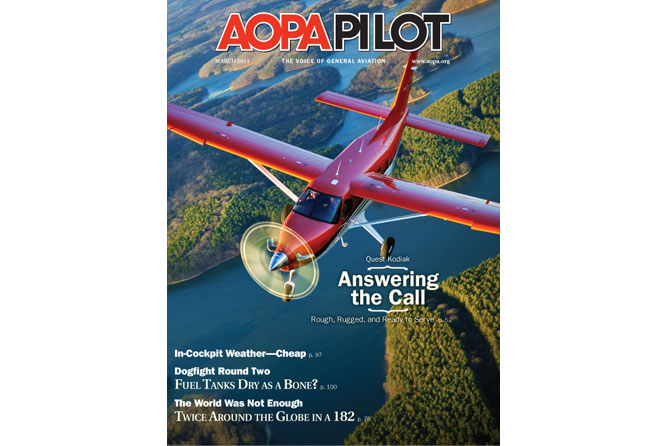 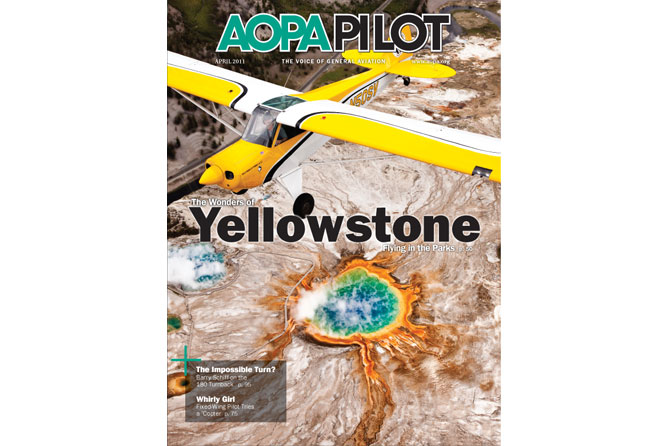 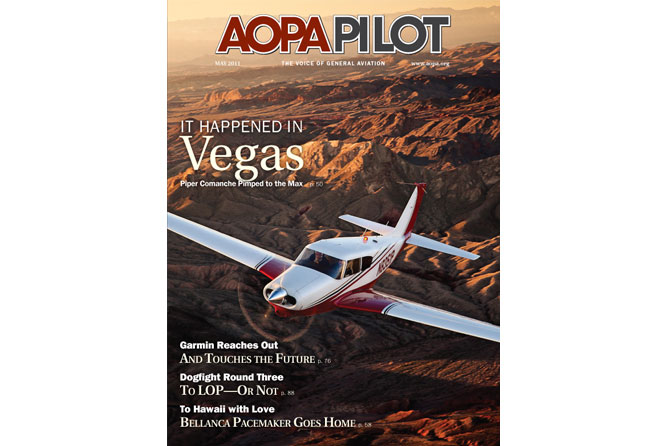 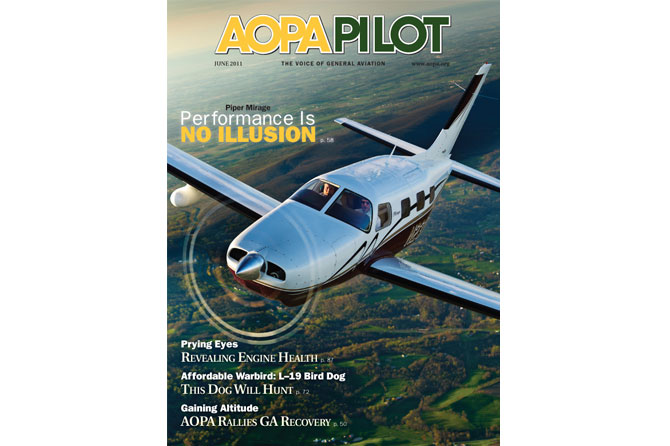 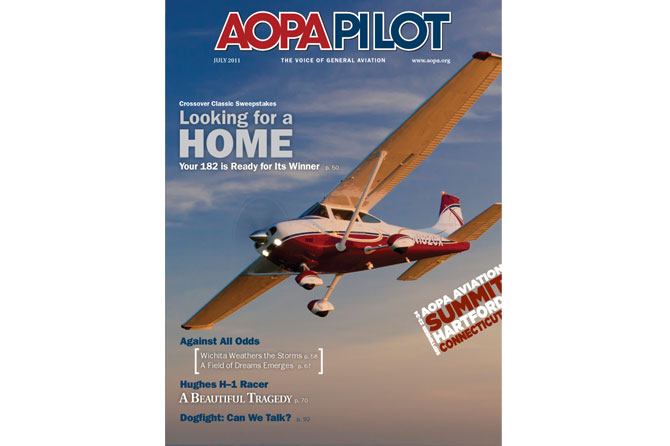 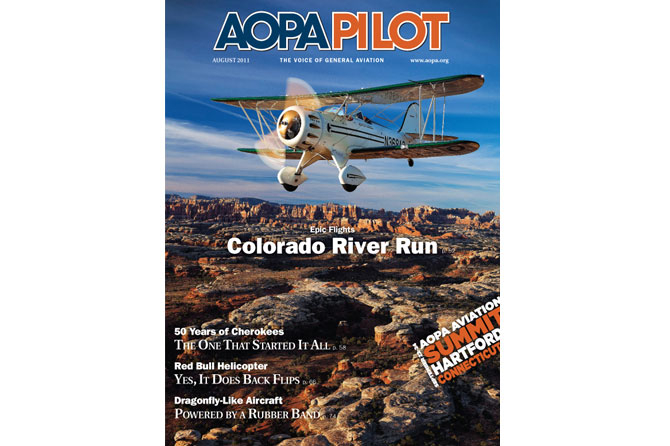 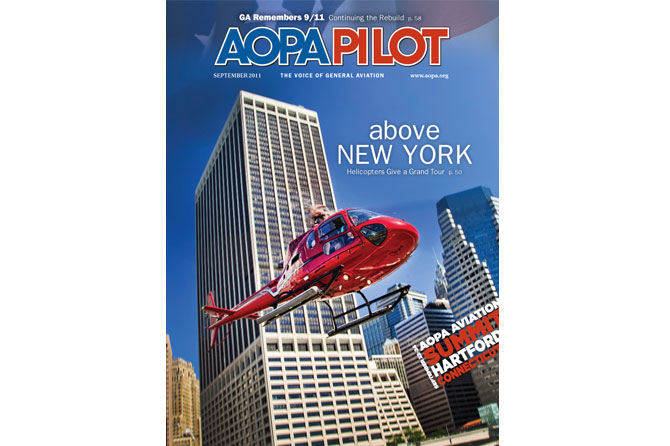 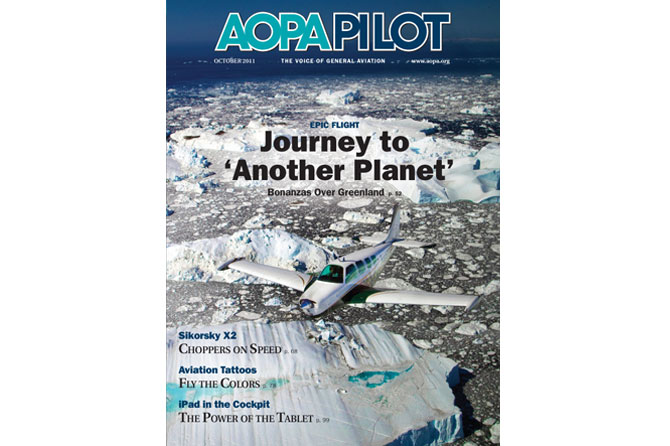 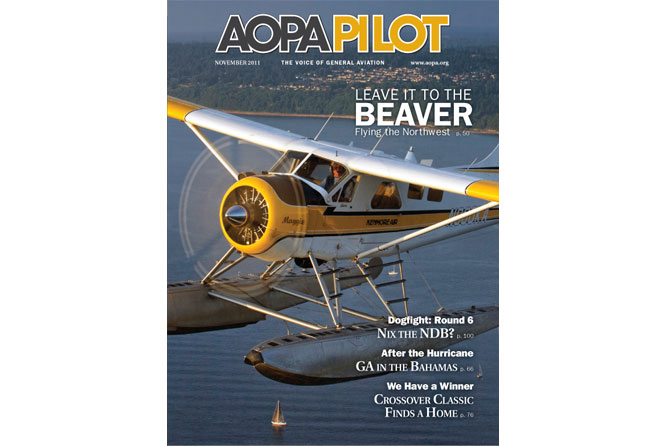 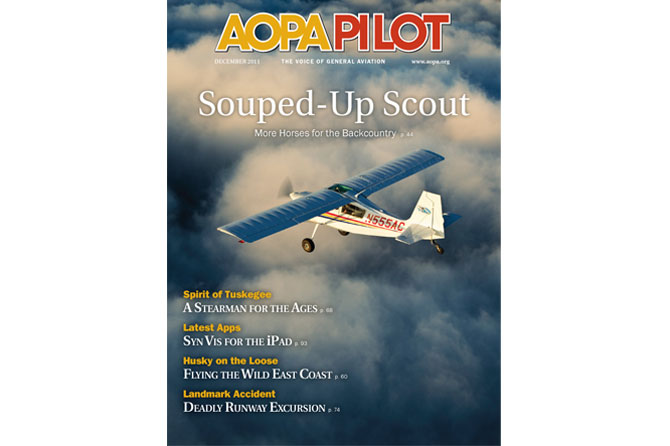 Is it over for Commander Premiere Aircraft?

It would appear so. Commander Premiere Aircraft was evicted from its facility at the Cape Girardeau Regional Airport in Missouri, with its assets still in the building. A bankruptcy court will sell the assets. City officials claimed the struggling company owed more than $800,000 in back rent.

Company founders aimed at a dream plane with a bigger engine, the one thing the Commander needed. At one point, they thought they had a buyer, a former European banker living in Canada. However, he was unable to find banks in Europe willing to lend the money for the completion of the sale.

The all-metal Bristell designed by Milan Bristela, the designer of the Evektor Sportstar and the PiperSport, was shown in the static display during AOPA Summit in Hartford, Connecticut. It can cruise at 117 knots true airspeed and has a base price of $125,000. The Czech Republic airplane is powered by a 100-horsepower Rotax engine. With full options, the aircraft can cost up to $150,000. —Mike Collins

Who’s hitting the books harder in ground school? Students training to become sport pilots, or those with sights set on a private pilot ticket?

If the results of FAA knowledge tests for the last year are any indication, the sport pilots have the edge. In 2010, the sport-pilot pass rate was 96.77 percent compared to 91.82 percent for the private pilot test takers.

More than 23,000 private-pilot knowledge tests went into the calculation, while there were only 743 sport-pilot tests graded.
—Dan Namowitz 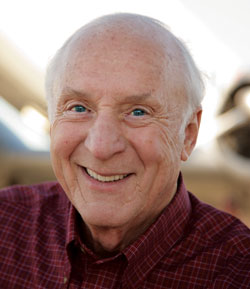 Barry Schiff, AOPA Pilot columnist and writer, has been named an honorary spokesperson for the Wolf Aviation Fund, a 501(C)(3) nonprofit foundation created by Alfred “Abby” and Constance “Connie” Wolf, who left their estate to promote work in general aviation. Connie was a world-record-setting gas balloonist, and Abby was a prominent Philadelphia attorney and one of the five founders of AOPA.

Schiff received the foundation’s first grant in 1992 to create and publish VFR routing charts through busy terminal areas. “This grant encouraged me to persevere with the project, which led to a greater understanding of how important it is to maintain plenty of accessible airspace around busy metropolitan areas,” Schiff said. “I know first-hand how much a Wolf Aviation Fund award means to any individual or group struggling to bring some new program to light. We should all think of how we can help make great things happen in aviation.”

Since that first grant, the Wolf Aviation Fund has provided more than 300 awards to individuals and groups working to inspire children to learn from aviation, serve those in need by flying as volunteer pilots, preserve airports, develop new technologies and products, gather together to work in support of general aviation, and to develop public support and recognition.

Nearly all the major aerospace companies in Wichita, in cooperation with several aeronautical research centers, are helping the city’s science museum called Exploration Place to refurbish its flight pavilion. The museum has collected $45,000 toward a goal of $60,000 needed to start design work. The total project will cost $1 million.

The theme of the new exhibit is called “Design, Build, Fly,” and allows youngsters and adults to build a model aircraft and test it. Cessna Aircraft Company, Hawker Beechcraft, and Bombardier-Learjet are among the contributors.

Diamond Aircraft’s single-engine D-Jet got a financial boost with the announcement that a Dubai investment firm, Medrar Financial Group, has purchased a majority interest in Diamond Aircraft Holdings, Canada. The firm, based in London, Ontario, makes single- and multiengine piston aircraft and is developing the 240-knot true airspeed D-Jet.

Jamil Marmarchi, chief executive officer of Medrar, said the current state of the economy highlights the need for, and potential of aircraft like the D-Jet. He said he is excited not only by the model in development, “…but also by the derivative models to follow.” Christian Dries, the chairman of the Diamond Group, said the acquisition can only strengthen his company’s worldwide position.

Marmarchi said he expects international pilot demands to drive a sustainable market for training aircraft in the long term. Medrar is a specialized asset management and investment firm based in Dubai in the United Arab Emirates. He said
he wants to make sure Diamond’s capital needs are met, but places special emphasis on development of the D-Jet.

One of the best airplane artists in the business is preparing what he calls a “ramp magnet” for the next EAA AirVenture fly-in. Using his own Van’s RV–8, John Stahr of Oregon is painting a tribute to the U.S. Navy Blue Angels on one wing, and a Lockheed P–38 Lightning on the other. The fuselage? Well, that’s still under construction in his basement. His long-term goal is to one day airbrush an airliner in his own unique way. 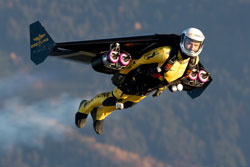 On September 26 Yves Rossy, 52—the stunt pilot known as Jetman—strapped on a wing fortified with four jet engines and made a diving exit from a helicopter before forming up with two jets for some aerobatic flying above the Swiss Alps.

“Adjusting his trajectory and altitude by his body movements alone, he then performed aerobatic figures above the Alps in the company of two L-39C Albatros airplanes from the Breitling Jet Team,” said a news release.

Rossy’s recent routines have included crossing the English Channel, flying alongside two Boeing Stearman biplanes, looping the loop around a hot air balloon, and hurtling across the sky over the Grand Canyon.