Online courses from the basics to tailwheel

Say "online training course" and most people think of countless hours staring at a computer screen while a pleasant-sounding voice drones on about the topic. Jeppesen's new G1000 VFR, IFR, and VFR/IFR online training courses couldn't be more different. These courses are well worth the time and money. 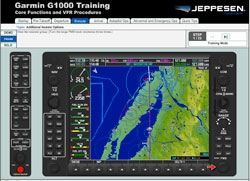 Say “online training course” and most people think of countless hours staring at a computer screen while a pleasant-sounding voice drones on about the topic. Jeppesen’s new G1000 VFR, IFR, and VFR/IFR online training courses couldn’t be more different. These courses are well worth the time and money.

Each course is organized according to a logical scenario-based training concept. There are overview, preflight, en route, approach, and other sections. A Quick Tip section is broken out and includes all those obscure G1000 tricks that we all struggle with, such as the real use of the Clear key. The IFR course gets more in the weeds on topics such as failure to autoslew, vertical navigation, and bypassing approach waypoints.

Accompanying every topic is a video that goes over the procedure and explains why it’s important. This is the extent of what you would expect from most courses or online training programs. But the Jeppesen program takes it further with two additional modes—training and solo.

With training, the program guides you through the specific knobology, giving the command and then pointing out exactly how to complete the task. Think of it as an instructor sitting next to you, telling you exactly how to manipulate each key and knob. 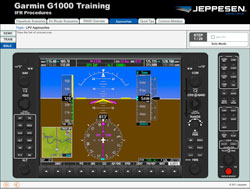 The solo mode lets you take command. The program will say something such as, “Select the BIZEN IAF transition.” Then it’s up to you to use the mouse to push the button that does this correctly. The program takes each task and breaks it down into individual button pushes, which can be illuminating. Who knew there are almost 30 steps involved in flying an LPV approach?

When the worst part of a course is the transaction to buy it, you know you have a good product. For complete information that’s logically organized and properly reinforced, Jeppesen’s G1000 courses can’t be beat. Now if only we could have the buttons pop out of the computer screen, it would be perfect.

If you’ve ever wanted to take dual instruction from Damian DelGaizo, one of the foremost tailwheel instructors in the country, now there’s a way to do it without traveling to his home base in New Jersey.

He’ll come to you in the form of a pair of 90-minute DVDs (Tailwheel 101 and Tailwheel 201), and you can watch and learn at the place and time of your choosing. The instructional videos put you in the briefing room and the cockpit of DelGaizo’s specialized aircraft at Landover Flight Academy as the veteran instructor walks you through the essential steps of becoming a tailwheel pilot, then mastering the finer points of short- and rough-field operations.

You get detailed briefings on why ground handling in these airplanes is different, the potential pitfalls that come from having the little wheel in back, and a sense of the adventure and excitement that await pilots who become proficient in airplanes such as the Super Cub and Stearman, which appear in the videos.

DelGaizo uses simple but effective graphics and hands-on teaching aids such as a bicycle wheel on a pole to demonstrate gyroscopic propeller forces. You get to fly along with him and a student as the student makes the timing and control application errors that virtually all tailwheel students will confront during their own training.

And you get a clear sense of why DelGaizo is such an effective teacher. He knows his material inside and out, and he makes short, timely, and insightful comments before, during, and after each flight. The instruction is personalized, clear, and fast-paced—and you’ll feel like you’re right there with the students as they make rapid progress toward their goals.

The editing isn’t fancy. DelGaizo uses a couple of small video cameras and an audio recorder, and that’s enough to impart the points he’s making. 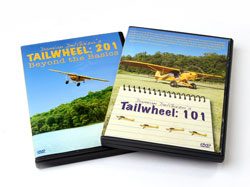 My only criticism of DelGaizo’s instructional videos is a philosophical disagreement over technique. He advocates using brakes for directional control on the runway and pulling up the flaps immediately upon touchdown—both of which I think are likely to cause more problems than they solve.

Braking for directional control (instead of immediately throttling up to increase rudder and elevator authority) can lead to ground loops and other calamities. And raising the flaps at a critical point in the landing is—for most students—a needless distraction at a time they should be focused on keeping the airplane tracking straight.

DelGaizo’s videos include inspiring aerial images of tailwheel airplanes in action—and watching them will make you want to learn to fly these mechanically simple but demanding airplanes.

App of the month

One of the iPad’s strong selling points for pilots is its ability to replace pounds upon pounds of paper. Nowhere is that more welcome than with the brick that is the Federal Aviation Regulations and Aeronautical Information Manual. These are critical documents that many of us leave at home because it doesn’t make sense to have to trade fuel for a book.

CoDeveloper’s Pilot FAR/AIM application nullifies the issue. The app is the full library of federal aviation regulations and the entire AIM and Pilot/Controller Glossary packed into one easy-to-use package. The app has an intuitive menu, good search capability, and the ability to bookmark pages. You can even email passages for those times when the hangar-talk argument must be won with proof. Pilot FAR/AIM is approximately a 20-MB download and 40-MB application.