Get the app Get the app
Already a member? Please login below for an enhanced experience. Not a member? Join today
News & Media 'Flying Wild Alaska' pilot to join Fly It Forward event 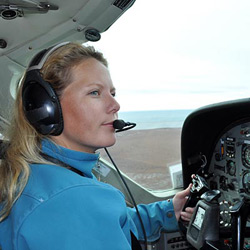 Flying Wild Alaska’s Sarah Fraher will join the festivities at the 2012 Women Fly It Forward event to be held on March 10 at Frederick Municipal Airport in Frederick, Md. The event is one of numerous activities that will take place at airports around the world during the week of March 5 through 11 in celebration of Women of Aviation Worldwide Week.

Fraher, a Cessna 208 pilot for Era Alaska, was most recently featured in the Jan. 13 episode of the series that airs on the Discovery Channel. In that episode, Fraher was shown flying her first run in the 208. She talked about how she had worked her way up in the ranks at Era, starting as a secretary who dreamt of one day seeing her name on one of the notebooks assigned to company pilots.

“I love watching Sarah fly on Flying Wild Alaska, she is such a determined woman,” said Victoria Neuville, organizer of the Frederick event. “I am really excited to have her speak with and inspire future women pilots at our event.”

Frederick’s 2012 Women Fly It Forward will feature flights in small aircraft to introduce as many women as possible to aviation. For more information on Women of Aviation Worldwide Week, see the website, where you can view worldwide events, register and announce an event at your airport, or get guidelines and ideas.