Get the app Get the app
AOPA Members DO more LEARN more SAVE more - Get MORE out of being a pilot - CLICK HERE
News & Media Tour the Strip, fight a friend

Tour the Strip, fight a friend 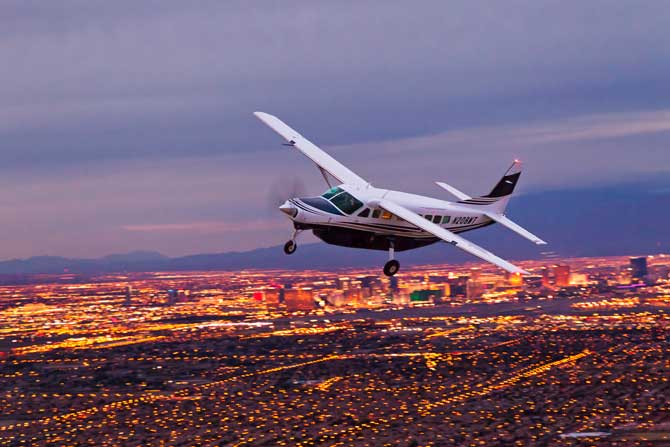 Glass doors of an office building at Henderson Executive Airport in south Las Vegas are plastered with names of aviation companies, yet they represent one firm. None of them matches the sign above another door 30 feet away—yet it’s one company. A hundred feet away is a second building with a fourth name. Still the same company.

This general aviation conglomeration is the dream of Richard “Tex” Coe, and it’s bursting at the seams.

Want some great vacation ideas for Las Vegas and the Grand Canyon? Coe has a company for that—Vegas 500 Air Tours. Need a flight school or a place to rent an aircraft? Try the second company—Monarch Sky. How about an air combat “Top Gun” experience? That would be Sky Combat Ace. Need maintenance work? Ask for Mojave Aviation, just one building over. Coe believes in diversification. 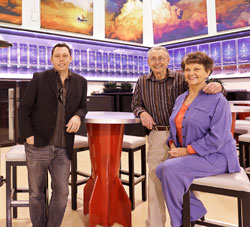 When this photograph was taken, Richard Coe's parents—Denny and Linda Coe—were at the airport helping their son on a daily basis. Since this article was written, they have returned to their home in Beaufort, South Carolina, but visit often and continue to offer their advice to Richard.

Coe left his internal motor running as he sat down for an interview in his office overlooking the main hangar floor, eyes flicking to the cellphone, feet idling but ready to move. His tour company was preparing a luxury dinner for customers on the night flight above the well-lit Hoover Dam and the carnival-like Las Vegas Strip. There were caterers to supervise and tables to set up in the hangar. He was doing none of that. In the middle of it all came a bride considering the hangar for her wedding, an ex-fighter pilot looking for a job, and an air-to-air photo shoot for AOPA Pilot.

Life in the U.S. Air Force got boring when he left F–16s to operate unmanned aerial vehicles, so he bought a Piper Cherokee Six to “put air under my butt,” but his friends wanted to use it. So he formed a flying club with the Cherokee and bought a Cessna 172 for himself. The same thing happened with the 172. The friends flew it more than he did. Light
bulb! A business plan came to mind.

Leaving the Air Force in 2008, Tex (his Air Force call sign) set up a flying club and school at North Las Vegas Airport, known to local pilots as “North Town.”

“It was just me and the two planes,” Tex recalled. The “Tex” moniker resulted partly from running low on fuel during a mission, and partly from his name (Tex-a-Coe). 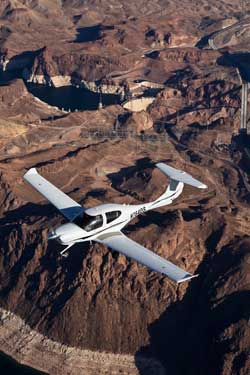 Flying over the Hoover Dam

The rules for the civilian flying club were simple—no minimum number of hours per day for rental pilots. As Coe points out, “What’s the point of getting your license if you can’t go somewhere?”

Opening a second base at Henderson Airport in south Las Vegas, he expanded Monarch Sky (offering fixed-wing and helicopter training), added a maintenance facility (Mojave Aviation), and launched two new companies simultaneously in February 2011. Sky Combat Ace (SCA) provides an air combat experience, while Vegas 500 provides tours of the Grand Canyon as well as the dam and the casino-lined Strip—Las Vegas Boulevard. “It’s just boomed. It’s been unbelievable,” said Pearl Bristol, who has worked for Coe since the beginning.

Diversification can protect his profits, Coe said, when the hot summer months reduce activity at his flight school and flying club. To make so many dreams come true at once he needed investors like Gareth Long, who operates a holding company named Amibug after his 3-year-old daughter, Amelia. “I’m the boss,” the tot reminds Coe.

He also needed his parents, Denny and Linda. Denny, with a bright sense of humor, praises his son as a brilliant entrepreneur. “But when it comes to organization, he’s got about that much,” he jokes, pinching his fingers together. That’s where his mother, Linda, comes in. Her real estate experience gives her an edge in business and marketing. Both are retired—or were. Living back East, Linda saw the move as an opportunity to spend more time with her grandchildren, while Denny gets to practice his hobby, carpentry. “There’s always something more to build,” he said. “I’m slave labor,” he added, joking that he “works for food.”

Both take orders from their son—until, that is, his father ends the conversation with “threatening to take out his belt” on a daily basis, said Coe, 36. “If my mother calls me Richard Allen Coe, I’m in some trouble.” 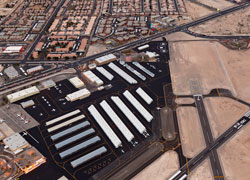 Disco-quality lighting suspended from a beam and painting whirling patterns on the hangar floor provided a nightclub atmosphere as Karen Whelan began her preparations of the Cessna Caravan. A booming sound system near a small stage provided the mood. There’s even a dance floor. Propane patio heaters kept the chilly February temperatures at bay.

A long row of drawings showing the history of fighter aircraft, drawn to scale by staff artist Daniel Clements, lined two walls behind the stage. Above hung cloud pictures he had collected since youth, now superimposed with modern jet fighters.

Whelan’s task tonight wasn’t just to fly the inaugural four runs of the dam and strip tour, but to serve as pilot in command on a nonpassenger flight as Coe flew formation for our photos. Employee supervises boss; no pressure.

Leaving the Air Force in 2008, “Tex” (his Air Force call sign) set up a flying club and school at North Las Vegas Airport, known to local pilots as “North Town.”

Crosswinds of 10 to 20 knots rattled the hangar walls at Henderson Airport. After takeoff, Coe asked on the intercom if I thought we could go both to Hoover Dam and the strip, but it was 5 p.m. and guests were already arriving. I backed up Senior Photographer Mike Fizer’s earlier request that we concentrate on the strip.

Controllers let us cross the strip, but not travel down it, yet Fizer managed to get several shots as we whizzed past.

Whelan guided the Caravan to a smooth landing and began preparations for her first passenger flight. (Only one of the flights actually took place because of lowering ceilings and rare showers in this desert community.)

Back in the hangar, guests had opted for the $149-per-person, 30-minute tour that includes a gourmet dinner of filet mignon or seafood, but they could have skipped the meal and taken the tour for $119. The next level up is a Grand Canyon tour for $324 per person that includes a stroll on the Hualapai (Tribe) Walkabout, a glass walkway that extends over the abyss 65 feet from the rim, 4,000 feet above the canyon floor. The top tour, and the most popular, is the Hualapai Walkabout plus a helicopter descent to the canyon floor provided by another tour company—to a pontoon-boat tour on the Colorado River. The Grand Canyon is a 45-minute flight, or a three-hour drive, from Las Vegas. It’s an easy choice.

Next to Coe’s office, a combat briefing was readied by Bill “Stroke” Tracy for Fizer and me. We needed another photo flight—this time using both the bright red and bright blue Extra 330 aerobatic aircraft—and then I needed to try to kill Fizer. 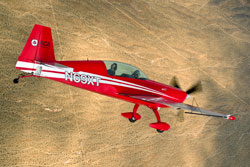 Like most of the pilots at Sky Combat Ace Las Vegas, Stroke is an ex-fighter pilot. (One of them is John “Slick” Baum, Thunderbird Two during the 2010 season of the U.S. Air Force Thunderbirds.) He got his nickname after an unfortunately timed application of power in his F–15 that broke windows over a large neighborhood. Air Force representatives went door to door, offering to cover the damage. A stroke in military parlance is a swift movement of the throttle to full power.

Put the enemy in the mid, upper-right portion of the prop arc, Stroke advised, and pull the trigger on the stick to the gun camera. Check. Two fighter jets on sticks served to illustrate how I must get in position.

On the flight, I led Coe through a series of gentle maneuvers for photos, remembering that a quarter-inch of stick travel in an Extra equals a half-foot of travel in a conventional aircraft. It’s easy to overcontrol the frisky Extra, an aircraft often used by top airshow pilots.

But Fizer was still alive, and that needed to change. We lined up parallel, hundreds of yards apart, to begin the fight. Coe was flying Fizer’s aircraft, and easily slipped away on my first attempt. In a right turn, I added Gs, pulling the right upper corner of my prop arc up to put the enemy in my crosshairs, and blasted away. By squeezing the gun trigger, I switched the video recorder to the gun camera for bragging rights on the ground. I warned Stroke that the sweat was starting on the back of my neck—the beginning of a countdown to airsickness that fortunately was never completed.

After the flight, the Extras are pushed into the hangar to serve as centerpieces for the Vegas 500 dinner.

It costs $1,800 if you bring a friend with you, or $2,300 if you come alone, and SCA will find an opponent for you. (Warning: He may be a trained Air Force fighter pilot.) You’ll leave with video clips of yourself as a hero. If you just want to learn aerobatics, it’s best to start with the 1972 Bellanca Citabria 7KCAB aerobatic trainer at Monarch Sky.

Just off the hangar, connected through a kitchen and staff break room, is a classroom filled with private pilot ground school students. Flight instructor Toni Mattei leads her students through the mysteries of weather. We’re now in Monarch Sky, despite having just left the Vegas 500 and SCA joint hangar. 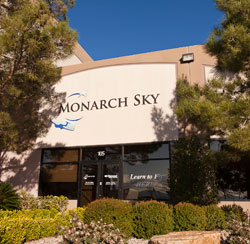 Beyond the classroom is a suite of offices for flight instructors, a simulator room, and a country-and-western singing receptionist—Lacy King.

Just for good measure, the company is also a Remos distributor, and sells a variety of used aircraft. The sales are conducted under the maintenance company, Mojave Aviation. 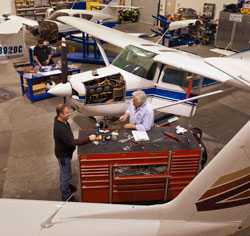 Doesn’t Coe know there is a recession? In answering, Coe laughs at the scruffy, evil face of the economic downturn and sees opportunities in its bloodshot eyes. “The Las Vegas economy has been rocked, but if you provide a quality service, there are still people willing to participate,” Coe said. A recession means better prices on goods and services, and a higher quality workforce that is hungry for a job. “You can pick the cream of the crop,” he said. That’s why he chose his parents.

What about all those company names? Isn’t the public going to be a little confused? A huge public relations campaign is helping the public—at least in the Las Vegas area—to understand the differences between the four companies. It’s difficult to find one unifying name that describes flight training, rentals, sales, air combat, tours, and repairs.

Prior to our visit, King, an assistant in the flight school and flying club, had jokingly asked Coe if he wanted her to answer the phone with, “Sky Combat Ace, Monarch Sky, Mojave Aviation, Vegas 500, this is Lacy, how can I help you?” 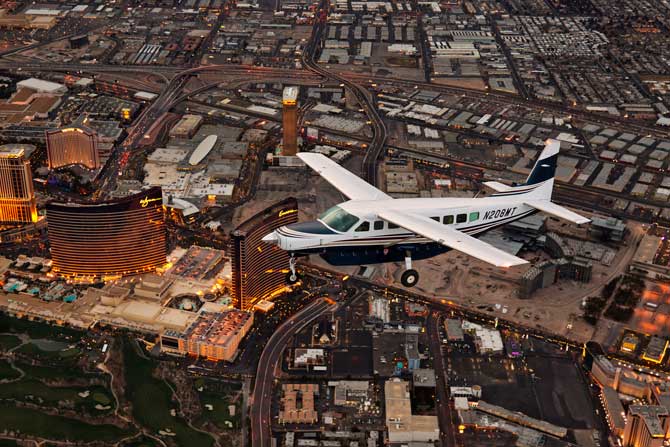