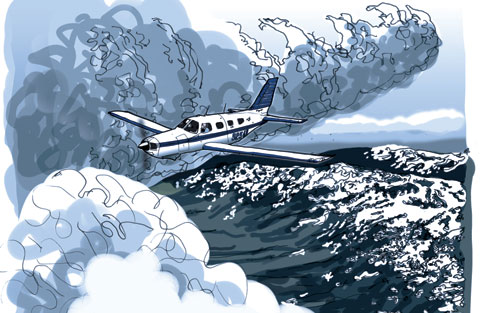 This story happened in my 1996 Piper Malibu Mirage, and my wife and our 16-year-old son were with me. He was doing his homework in the back. We were flying from Chino in Southern California to Reno, Nevada, for his pole-vaulting invitational in January.

Winter over the Sierras can make for an interesting flight. We departed at 10 a.m., which would have us arriving by noon, and the winds weren’t forecast to pick up until after 1 p.m. Given the expectation of turbulence and winds, we decided to fly up the west side of the Sierras near Sacramento and then shoot directly over the northern part of Lake Tahoe to come into Reno. I figured I could monitor the NorCal Approach frequency handling Reno and listen to the pilot reports of turbulence. If it was too excessive, my plan was to not even go over the Sierras but to land at Sacramento and spend the night. Sacramento was rainy with a 3,000-foot overcast and 10 miles visibility.

I filed IFR, climbed to FL220, and remained in visual conditions with only small little pockets of chop throughout the first two hours. As we approached the Sierras, the controller said there had not been too many complaints.

Since there were limited reports of turbulence in the area and I was still over the western edge of the Sierras, I began a gradual descent and started pulling back the power. My son packed away his table and books and we all cinched our seatbelts tight, just in case.

By the time I was at 17,000 feet, the power was back to 20 inches and the engine was running cool. I was coming up to TRUCK intersection and the NorCal controller said he had just received a report of severe turbulence about 12 miles north of the Reno/Tahoe International Airport. Aircraft were beginning to report severe turbulence taking off to the south, also about 10 to 12 miles. He asked me if I had the airport in sight, which I did, and said he thought that the turbulence would be less rough near the airport, which lies in the middle of a valley surrounded by mountains and hills. There had been no reports on left downwind legs, and he asked if I wanted to cross over the field and do a left downwind approach. Since I could clearly see the airport in the distance, I said this seemed like a good approach. He cleared me to descend to 9,000 and proceed direct to Reno, expecting a left downwind approach.

The power was back, the gear was down, and I started a gradual descent, keeping the airspeed below 120 KIAS the entire way. This was going well. We had experienced only light to moderate chop, and we were going to make our destination of Reno.

As I neared the runways at Reno, flying directly perpendicular to my intended landing runway, a lone cloud sat directly over the airport at about 10,000 or 11,000 feet. It didn’t seem big, was definitely not a cumulus cloud, didn’t seem too far around, and wasn’t very high. I didn’t think anything of it since I would be safely below it by at least 1,000 to 2,000 feet. As I neared the cloud it started to get bumpy, and I told everyone to make sure they were buckled tight. I turned off the autopilot and allowed the airplane to float over the waves, if we were going to hit any. I also began pulling the power back even more as I didn’t care if we lost pressurization being at 9,000 feet now.

Right underneath the western edge of the cloud, I immediately hit a wall of rising air and it drove the vertical speed indicator to 2,500 fpm in an instant. We were pushed into the cloud and tossed around violently. I watched the altimeter and airspeed indicator to make sure my speed didn’t pick up too much and to make sure I still had some good distance between us and the ground. The altimeter read 11,000 feet, but had read 9,000 an instant before. My attitude was all over the place, and I was doing everything I could to maintain some semblance of straight-and-level flight. I pulled the power back to idle and watched the airspeed yo-yo from 100 to 130 KIAS. The G500 PFD flashed Fail twice, meaning it couldn’t get accurate attitude information.

We were out of control, in a cloud, and I was just hoping we could get in the clear without losing part of the airplane so I could get an attitude reference the old-fashioned way—with my eyes.

After what seemed like five minutes but probably was only 30 seconds of terror, we made it to the other side of the cloud, into the clear, and I could see we were right side up, going about 100 KIAS and still at about 11,000 feet. I told the NorCal controller that we encountered severe and possibly extreme turbulence but that I didn’t think any damage was done and no one was hurt. My wife, sitting next to me in the right seat, had her head in her hands and was praying, which was good because she was doing everything she could to remain calm. I told the controller I wanted direct to the airport, and he asked if I could cancel IFR and said he could clear me direct if I would.

We landed relatively uneventfully, and when we got out, I asked the lineman where the designated spot to kiss the ground was.

I looked up at the lone cloud, which did not look the least bit menacing, and found out later that it was a rotor cloud. Some of my friends who fly regularly in the mountains said they give these clouds a very wide berth and would rather encounter severe turbulence than be tossed around in a rotor cloud.

So, what did I learn from this experience? With my wife and son on board, if I hear “severe,” I’m turning to my alternate. A nice dinner and a beer in Sacramento followed by an early morning flight to Reno would have been fine. Second, I am thankful that I had the conversation with the owner of the FBO at Chino about cinching tight the seatbelts and slumping down in the seats when encountering severe turbulence. My son said his books were actually hitting the ceiling in the back. Pulling back the power and extending the landing gear helped me to reduce the indicated airspeed to a crawl, which I’m sure saved us during our rotor cloud encounter.

Two days later, we departed Reno before 9 a.m. in calm winds. We made it home having only hit small pockets of light chop along the way. That night, while watching the news, we learned that Vice President Joe Biden was in town that day for a speech, and because of the winds at Reno, he diverted to Fallon. My wife looked at me and said, “The vice president, with all his great equipment and pilots, chose not to land at Reno, but you did?”

Rod McDermott is an instrument-rated private pilot with more than 1,000 hours.