Get the app Get the app
Already a member? Please login below for an enhanced experience. Not a member? Join today
News & Media Pilots: Terry Bryan

Transporting the most deserving patients in style

Early one morning, the day before Veteran’s Day, I received a phone call from my friend Terry Bryan asking if I could be at the Sunport in Albuquerque in two hours. Standing by two hours later, a sleek Cessna Conquest II taxied up with Bryan at the controls. 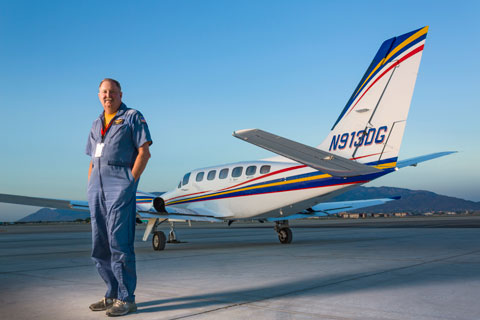 The door opened and out he jumped, followed by his flight nurse, Meisha Hunt, R.N. The patient, who was on a stretcher, was carefully maneuvered out of the airplane by paramedic Bill Smith while Bryan served as the guide from the ground. The patient, a World War II paralyzed veteran, had been airlifted in from Midland, Texas, for treatment at the Albuquerque Veteran’s Hospital. It was obvious that patient care was of utmost importance and that Bryan was no ordinary commercial pilot.

Bryan then proceeded to the second ambulance to help transport the next patient to his aircraft. This time it was a young paralyzed veteran who had completed treatment at the VA hospital. Bryan exhibited incredible compassion and a deep connection with his patients and crew. The loading and unloading of each patient was like watching a carefully choreographed ballet and was deeply moving.

We taxied out to the runway, and Bryan called the tower using the call sign “Lifeguard One.”

We received immediate clearance for takeoff, preempting all other aircraft already waiting. He had filed IFR and we climbed to 20,000 feet. We were heading for Grand Junction, Colorado, and snow was in the forecast.

Bryan says his $1 million refurbished Conquest II with its twin 2,000-horsepower turboprop engines is the perfect flying platform for a single-patient air ambulance. Later, as we broke out of the clouds on a crosswind approach, we delivered the second patient to his hometown.

Bryan, a native New Mexican, has logged more than 27,000 hours as a commercial pilot and CFI with much of his professional experience being with Eastern Airlines. Now he flies seriously ill veterans all over the United States.

During their healing journey, they are in special hands with Bryan at the controls. He and his crew fly day or night regardless of weather conditions and consider each patient a first-class passenger.—by Robert Talarczyk