Get the app Get the app
AOPA will be closing at 2:30pm ET Wednesday, November 23rd, and will remain closed Thursday and Friday in observance of the Thanksgiving holiday. We will reopen Monday November 28th at 8:30am ET.
AOPA Members DO more LEARN more SAVE more - Get MORE out of being a pilot - CLICK HERE
News & Media Wx Watch: Mega-storms, on the prowl

Wx Watch: Mega-storms, on the prowl

Convection that lurks night after night

Convection that lurks night after night 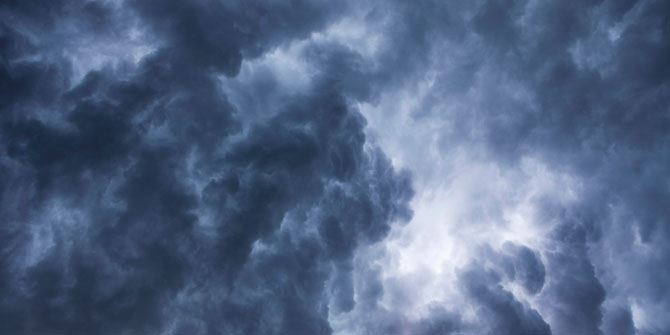 Most of us have come to think of convective activity in terms of relatively short-lived time scales. An air mass thunderstorm, for example, we learn lasts about an hour from start (the cumulus stage) to finish (the downdraft stage). Multicell and supercell thunderstorm systems can take an entire day to run their life cycles. But one type of convection can regenerate over a period of days, making flight planning problematic—especially if the routes call for night flying.

Welcome to the world of the mesoscale convective complex (MCC). You know right off the bat that this storm system is big because the term mesoscale refers to a weather feature that’s bigger than microscale, with features such as individual air mass storms or valley winds but smaller than synoptic features such as frontal systems or hurricanes. The official definition of an MCC includes the following: 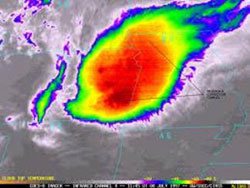 An infrared view shows the classic shape and size of an MCC. Note the cirrus outflow at the periphery, which can cause high-altitude turbulence.

MCCs can happen anywhere east of the Rocky Mountains, and often are located north of a stationary or warm front, and west of high pressure ridges. The instability created by the fronts sets the stage for the MCC to form. A strong southerly flow of warm, moist air from the Gulf of Mexico provides the momentum for lifting the cloud mass to its saturation point, and then it’s off to the races. Every night for several nights.

Why do MCCs form at night? It’s all about that Gulf air. During the day, winds aloft mix downward to the surface, and surface air mixes upward because of convective heating. But at night, when surface heating stops, those warm winds aloft are still moving along—unimpeded by friction with surface features. In fact, when high pressure is to the east, the clockwise flow around the “back side”—or western half—of a large high-pressure dome can reach speeds of 60 knots or more. This low-level jet stream (LLJ) is of critical importance to MCC formation, and its speeds are possible precisely because its winds are decoupled from the surface winds that occur during the day.

Once the LLJ heats up the cloud mass, it rises to the 10,000- to 18,000-foot level, where a low-pressure circulation begins. This mesoscale convective vortex (MCV), sometimes called a mesolow, takes on a life of its own over the following days. Peak activity happens during the early nighttime hours, when the LLJ starts to do its work and the first downbursts reach the ground. Convection and precipitation reach a minimum in the late morning, when surface interaction causes the LLJ to slow down. But the MCV persists, and the cycle starts all over again when night comes. This continues until the high pressure to the east moves off or dissipates. 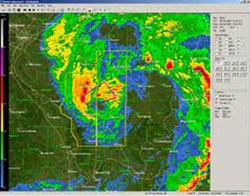 Radar imagery of another MCC reveals the cyclonic circulation, typical of an MCC's midlevel vortex.

MCCs have it all, but their main feature is heavy precipitation. Because they move so slowly—usually parallel to their parent fronts—there’s plenty of long-lasting night instrument meteorological conditions, and flooding rains. Nighttime gust fronts are also possible, although not of the magnitude associated with fast-moving cold fronts. So are the usual culprits lurking in all convective systems: heavy rain, hail, turbulence, lightning, and wind shear.

At cloud-top height (30,000 to 40,000 feet msl) something interesting happens. The rising air at the top of the MCC presses up against the tropopause, causing its vertical speed to slow. This creates a cap of high pressure over the top of the MCC. This can be seen on constant pressure charts for the 200 mb (about 40,000 feet msl) level. Visible satellite imagery will show cirrus clouds flowing downstream of the MCC tops, which further illustrate the high-pressure outflow at the MCC tops.

So there’s your MCC sandwich: an LLJ inflow at lower levels, a midlevel MCV/mesolow, and high pressure aloft. For turbine drivers, the high-pressure outflow is another factor to consider. Winds flowing from the tops of the MCC can interact with surrounding high-speed winds aloft and create jet streaks—bands of 100-knot-plus winds that can cause turbulence.

Anyone flying in the Midwest during the summer months should be on the lookout for MCCs. Again, the satellite views are the quickest ways to spot one, but remember that imagery in the visible spectrum isn’t available at night—because the sun has gone down! Instead, rely on the infrared views.

Although they may bear some technical jargon, it’s always informative to check for any mesoscale discussions (MDs) regarding MCCs. They give more precise convective information than that issued by flight service or private weather service providers. These are found at the Storm Prediction Center website.