As 'old school' as it gets

A wind gust pushes nose and tail off line, giving precious little time to react before the airplane pivots violently on its narrow landing gear. If it sounds counterintuitive to push the stick forward, apply full power, apply rudder, and to cause an airplane without brakes to accelerate toward trees, welcome to World War I aviation.

The rudder will do little to help without a good burst of propwash; if you’re lucky, there’s a throttle. If not, you have to switch the engine back on.

At Old Rhinebeck Aerodrome in Rhinebeck, N.Y., dinosaurs of world aviation—Blériot, Curtiss, Fokker—still roar to life on summer weekends (weather permitting). Since Cole Palen flew his first show in 1960, generations of pilots have commanded vintage aircraft, including some still airworthy after a century of service or more. Subtract a century of technological achievement from an airplane, and you could be left with something “nasty”: a word Chief Pilot Bill Gordon reserves for the Sopwith Camel. 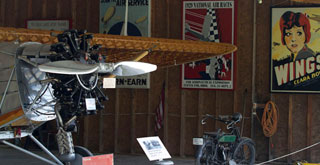 Donations are being collected to finish a replica of the Spirit of St. Louis at Old Rhinebeck Aerodrome.

The replica Fokker Dr.I triplane (flown most famously by Manfred von Richthofen, the Red Baron) which Gordon flies in the weekly show (squaring off as the “Black Baron” against a French nemesis in a lovably corny melodrama scripted long ago) has been upgraded with a 200-horsepower radial (not rotating) Continental engine. The Camel, on the other hand, runs a vintage rotary, spitting oil in the pilot’s face and belching flames a foot long from exhaust vents in the cowling while tremendous gyroscopic forces created by spinning cylinders twist the nose constantly to the right. The Camel can complete a 270 degree right turn faster than its pilot can convince it to make 90 degrees left, Gordon said, which lends the airplane to specialized combat tactics and a nonstandard traffic pattern. Crosswinds pose a serious problem, particularly on a bi-directional runway flanked by trees, rather than the circular airfields of the Camel’s day.

“That’s a nasty airplane to fly,” said Gordon, also lead pilot for the Iron Eagle Aerobatic Team for the past two decades. “I have three takeoffs and landings in it. That was enough.”

Gordon is the chief pilot and mechanic, with seven years logged at Old Rhinebeck. Gordon also flies wing walkers Jane Wicker, recently featured in AOPA Pilot , and Carol Pilon. He is the only pilot checked out on every aircraft in the fleet, and responsible for hiring new pilots. There are jobs available, he said, but would-be barnstormers must come with a rare combination of extensive tailwheel time, superior stick-and-rudder skills, and weekend availability.

Some of these aircraft are a little less demanding than others, Gordon said. Many of the more “modern” models are equipped with luxuries like airspeed indicators, brakes, and ailerons. The Fokker D.VII biplane, built from plans using period materials and techniques, was the best flyer of World War I, and offers pilots an intermediate step on the way to the much less forgiving triplane.

Clay Hammond, a second-generation Old Rhinebeck pilot who has also flown in the corporate world, said modern aircraft offer little help preparing pilots for centenarian aircraft, though the stick-and-rudder skills gained in a Spad do carry over as an aviator moves back to modern aircraft. Energy management is one of those critical skills.

“You really learn,” Hammond said. “You’ve got no brakes to stop you, so you don’t want to be landing too fast.” 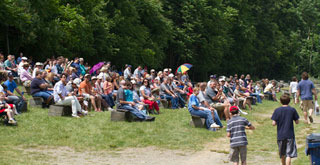 Weekend airshows draw crowds of hundreds to Old Rhinebeck Aerodrome more than half a century after it was founded.

Aviators and aviation enthusiasts have been drawn to this hamlet just east of the Hudson River for decades, some making a special trip just to see the 1909 Blériot XI, which is not a replica. It is the oldest aircraft still flying in the United States, and as idiosyncratic as any in the fleet, according to Airshow Director Neill Herman, who flies it down the runway making short hops into the air to entertain the crowd. The Blériot, powered by a three-cylinder radial, is capable of flying the pattern, Herman said, but even a light crosswind can play havoc. During each show, Herman watches sturdier aircraft with a careful eye, and if any of them struggle, the Blériot is grounded.

The pilot “controls” a Blériot with a combination of a rudder bar, and a Blériot cloche, one of the first “traditional” control yokes that moves an elevator and warps the wings in place of ailerons. Much anticipation is required, as the wing warp has a long delay, while rudder inputs seem nearly “normal” to a modern flier. 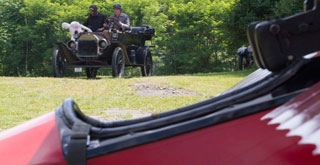 Vintage automobiles are another attraction at Old Rhinebeck Aerodrome, though volunteer Bill Poythress, a friend of Cole Palen even before the aerodrome was created, said Palen generally acquired the cars to trade for airplanes and parts.

Herman works closely with the FAA, which keeps a watchful eye on the operation, and there are detailed safety procedures taught to new generations of volunteers and staff—many of them high school and college students able to sprint down the grass field to catch the wings of a rolling warbird and help the pilot control it. Gordon said emergency landing fields in the vicinity are all carefully scouted and briefed, so if an airplane does not return, the ground crew will know where to start the search. There are no radios in these aircraft, and traffic control is handled through a combination of scheduling, observation, and flag signals. It is a decidedly VFR operation.

Herman said general aviation pilots are welcome to try their hand at landing on the grass strip, but prior permission is a must. It also helps to visit for the first time by car, and walk the field to learn some of the quirks, like the dogleg at the north end and the rock ledge that rises up under the grass just before the point most of these airplanes can gain flying speed on a southbound takeoff. Trees are also intimidating, waiting to snag a pilot whose short-soft-field skills have grown rusty.

GA pilots should check notams and avoid the airfield during weekend shows, when arrivals and departures are strictly scheduled.