Get the app Get the app
News & Media IFR Fix: Worth a thousand words

IFR Fix: Worth a thousand words 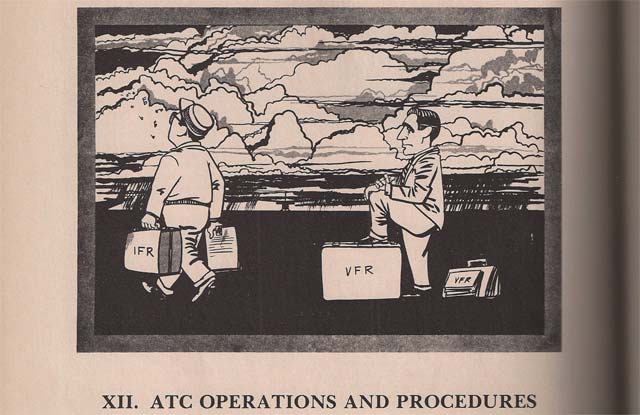 A cartoonish yet persuasive illustration in an ancient edition of the FAA’s Instrument Flying Handbook really was worth a thousand words for sending a message.

As a dejected VFR pilot looks on, an instrument pilot walks toward an unseen aircraft, eyes on the sky. In the background of the black-and-white drawing, the sky holds an astonishing, unlikely assortment of clouds. We know which pilot is which because the artist took pains to label one fellow’s luggage “IFR” and the other’s “VFR.” The VFR pilot’s left foot rests atop his suitcase, further emphasizing that he isn’t going anywhere.

Powerful, as a sales pitch for instrument training. And what instrument pilot hasn’t been in the position of the frustrated, frowning fellow for whom flight is forbidden?

What the fellow with the VFR monogram may not realize is that the other pilot may have agonized just as long and hard as he often does about whether to launch into this curious collection of clouds.

Turns out, as he discovers when he too becomes instrument rated, that, there are many occasions when you can’t go. When you can go, the tougher call to make is if you should. Yes, it’s still “a license to learn.”

It’s true that in the instrument environment, there are more options open to the pilot, but those choices pose as many problems as solutions. Assuming that recency of experience is up to date, there’s still the proficiency calculation to be made against the flight conditions to be expected. Is the flight worth it if there’s a risk of diverting to the alternate? Since diverting implies both low weather and extended flying—and perhaps a missed approach somewhere—the pilot’s health and physical stamina deserve some consideration.

Textbook art is necessarily revised as time and technology take their toll on training themes. Color photography of a control tower now occupies the space that the old illustration once filled. Nice—but lacking the perhaps inadvertent abstract complexity of the drawing.

It would have been fun to see a follow-up drawing of the IFR and VFR pilots, set three hours later. (Have at it, artists out there!)

Where would they be? Which would be exiting the frame, head held high, and which would be dejected, wishing to be elsewhere?

Dan Namowitz has been writing for AOPA in a variety of capacities since 1991. He has been a flight instructor since 1990 and is a 35-year AOPA member.
Go to Dan Namowitz's Profile
Topics: IFR, Technique, People