Get the app Get the app
AOPA will be closing at 3:15pm ET Thursday, December 1st. We will reopen Friday morning at 8:30am ET.
AOPA Members DO more LEARN more SAVE more - Get MORE out of being a pilot - CLICK HERE
News & Media Cub sim: Redbird Flight Simulations goes low tech 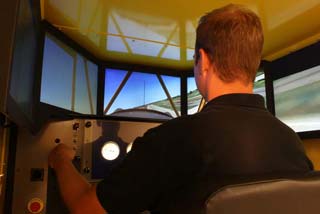 The sophisticated, computer-controlled, electronic box with a 180-degree wrap-around view mimics the low-tech Cub’s flight characteristics, and some of its ground mannerisms, too. To start the simulation, for example, someone needs to spin the propeller manually on the outside of the box. Contact!

“We built this as a fun, one-off project in honor of the Cub and we wanted to have it at Oshkosh to celebrate the anniversary,” said Todd Willinger, Redbird CEO. “If someone wants to buy it, we’ll be glad to make more. But this was something we are doing to mark an aviation milestone.”

The yellow-painted Cub sim is based on Redbird’s MX2 model which typically sells for about $50,000.

“I don’t know exactly what the price for a Cub sim would be,” he said. “But I’m guessing it would be a lot less than a new Super Cub.”