Get the app Get the app
Already a member? Please login below for an enhanced experience. Not a member? Join today
News & Media Prop control now available for Cirrus models 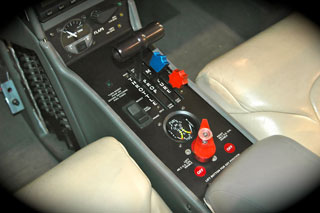 When the first Cirrus was introduced, the lack of a propeller control was seen as an evolutionary step on the way to full authority digital engine control (FADEC). But now Tamarack Aerospace Group thinks there’s a market for a step back to classic control configuration. The company recently released a supplemental type certificated throttle quadrant for the SR20 and SR22 models that adds the propeller control back to its place between the throttle and mixture controls.

According to Tamarack, the modification will enable a more efficient fuel burn, or as a statement put it, “a significant decrease in operational costs.” While some fuel savings is likely possible, the simple throttle system helped to entice many Cirrus buyers to the airplane. That unique feature, and the fact that it will void the warranty on a newer model, may make the modification a tough sell.

A Tamarack statement said that most mechanics can install the new quadrant in “a few hours.” It sells for $3,500.