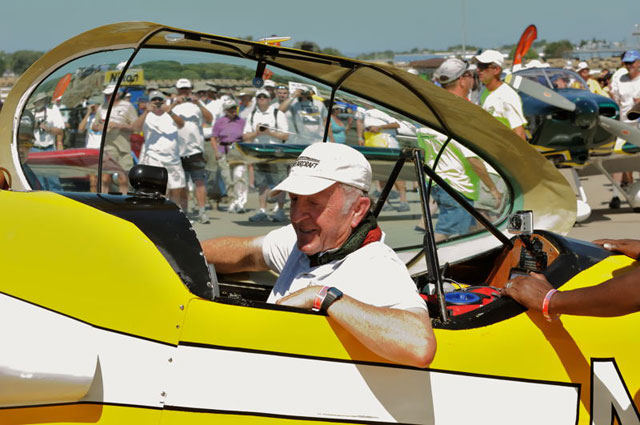 With a crowd watching, Dick VanGrunsven arrives in the RV-1

"In the air, it flies just the way I remembered it," said VanGrunsven, who transformed what was once a Stits Playboy into the first of a long line of metal, low-wing airplanes that combined speed, economy, and responsive handling. More than 7,500 RV kits have been completed and flown since Vans Aircraft was founded in 1972, making it the most successful line of experimental aircraft in history.

The RV-1 was escorted to the show by a large group of RVs that included models ranging from the single-seat RV-3 to the four-seat RV-10.

The group also included the newest creation from Vans Aircraft, the RV-14.

The RV-14 is a two-seat, side-by-side aircraft powered by a four-cylinder Lycoming IO-390 that's designed as a relatively fast, long-range aircraft with aerobatic capability. It uses a shortened version of the RV-10 wing, holds 50 gallons of fuel, and has a top straight-and-level speed of about 204 mph. It also has a 46-inch-wide cockpit (which is about two inches wider than an RV-7). RV-14 kits will come in a higher state of completion and require less time to build than any other Vans aircraft except the E-LSA RV-12.

Vans Aircraft developed the RV-14 over a six-year period but kept details under wraps until its arrival at AirVenture. Wing kits are expected to be available late this year.