Get the app Get the app
Already a member? Please login below for an enhanced experience. Not a member? Join today
News & Media Acting FAA chief: Realizing NextGen benefits a priority 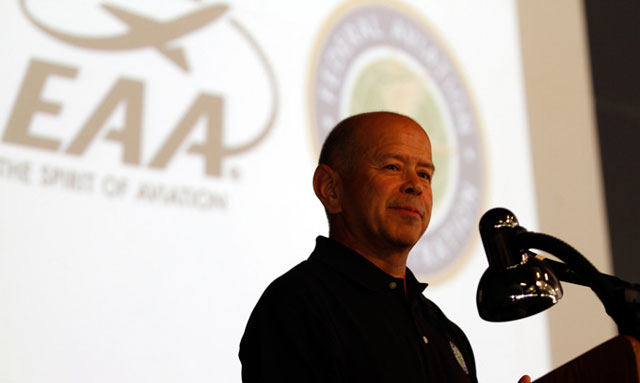 Acting FAA Administrator Michael P. Huerta said the agency is focused on accelerating the arrival of NextGen benefits for both commercial and GA users, and called on pilots to renew their commitment to safety at a forum hosted by EAA at AirVenture July 26.

Huerta, fielding questions from an audience that included dozens of pilots and other attendees of the massive airshow in Oshkosh, Wis., said that increasing the efficiency of aircraft certification and other agency functions will be achieved with a renewed focus on communication, though he acknowledged that change in an organization with 48,000 employees will take time.

Huerta said NextGen, the upgrade of the National Airspace System to one based on high-precision satellites instead of ground-based navaids, has many benefits, including an increase in safety. Huerta said that aircraft equipped with ADS-B capabilities are involved in fewer accidents, with a 47 percent decrease in the accident rate documented by FAA analysis.

“The big benefit for GA is, it enables us to de-conflict airplanes,” Huerta said.

Huerta fielded a question about the recent White House push to implement $100-per-flight user fees for turbine aircraft using ATC services, a move that Congress has rejected so far. Huerta said President Barack Obama is “trying to start a conversation about how can we reduce the reliance on the general fund.”

FAA operations are largely funded with proceeds from a tax on aviation fuel, a policy that AOPA and other organizations have long maintained is the most equitable.

Huerta faced tough questions from senators during confirmation hearings in June, and there has been no word yet on when a vote will be taken on his nomination.