Diamond shows off changes to D-Jet

Diamond Aircraft revealed the latest version of its much-awaited D-Jet at EAA AirVenture, and issued a brief update on the single-engine jet’s progress.

Most evident are the D-Jet’s redesigned winglets. Gone are the original winglets, which were of a conventional vertical-sail design. The new winglets are subtler in appearance and are more closely blended into the wingtip. According to a spokesman, the new winglets provide several benefits. Flight tests showed that they yield less drag than the original design, and therefore reduce fuel consumption. They also improve aerodynamic behavior at the stall. There is less rolloff at the stall, and lateral and directional stability is also improved, the company said. 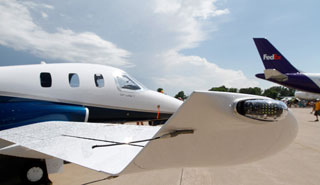 Other changes include a switch from a hydraulically actuated landing gear system to an electro-mechanical design with smaller landing gear doors. In addition, the airplane’s flap tracks have been made smaller, stronger, and lighter in an effort to improve the airplane’s payload. What’s more, the D-Jet has been fitted with a stick pusher (but no stick shaker, only a warning light) to provide a greater margin of protection against an aerodynamic stall. Earlier D-Jet prototypes had no stick shakers and relied on aerodynamic buffet to warn pilots of an impending stall.

The D-Jet at AirVenture is Serial No. 3—a nonconforming prototype that has undergone more than 200 hours of flight testing to examine handling characteristics. Serial No. 4 will be a conforming airplane.

In all, the D-Jet has accumulated more than 530 hours of flight tests, spread among three different airplanes. The program experienced a series of delays owing to the recession of 2008 and its aftereffects, but the company now says that certification is expected by the first quarter of 2014.

AOPA Pilot Editor at Large
AOPA Pilot Editor at Large Tom Horne has worked at AOPA since the early 1980s. He began flying in 1975 and has an airline transport pilot and flight instructor certificates. He’s flown everything from ultralights to Gulfstreams and ferried numerous piston airplanes across the Atlantic.
Go to Thomas A. Horne's Profile
Topics: Aircraft, Technology, EAA AirVenture