Get the app Get the app
Already a member? Please login below for an enhanced experience. Not a member? Join today
News & Media IFR Fix: Checkup to Chester 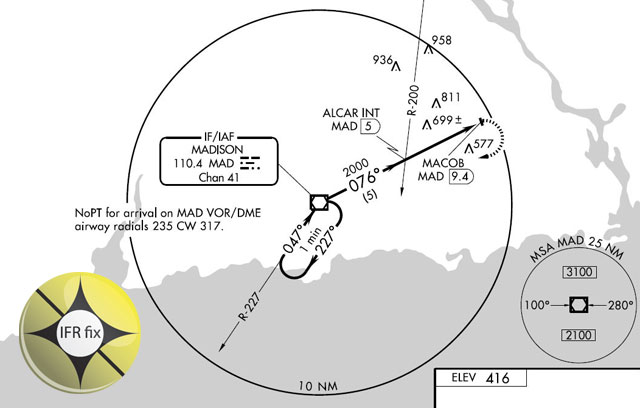 Quick, what’s the reciprocal of 235 degrees?

What’s the short-field landing procedure for the aircraft you usually fly IFR?

Not much, normally. But it’s all relevant today, because you are taking a proficiency flight to the serene country airfield in Chester, Conn.

The brief list of instrument approaches for Chester consists of two GPS procedures and a VOR-A approach, which as it turns out, possesses some noteworthy characteristics.

For one, the approach employs the “holding pattern in lieu of” any procedure turn. For another, you notice the possibility that you could be flying part of your course reversal over water.

Not just “water.” That’s the Long Island Sound out there--and if there’s instrument weather in the area, that’s likely where it came from. Think thick, fast-moving fog.

The good news, if you arrived via the inbound courses (reciprocals) of Madison VOR airway radials 235 CW (clockwise) to 317, is that no procedure turn is required.

If the slightly bent aspect of the VOR approach plan view draws your eye, it is created by a 29-degree course change required after you cross the VOR. Don’t make the error of starting to time your final approach from the VOR. Note that the final approach fix, ALCAR, is still five nautical miles away.

Identify ALCAR either as the 5-DME fix from Madison, or by using the 200-degree crossing radial from the Hartford VOR.

Arriving at night? The runway lights should be blazing away if you complied with a note stating that the approach is not authorized “except by prior arrangement for runway lights.”

Day or night, as befits a proper circling approach you will arrive roughly perpendicular to Runway 17/35, which, at 2,566 feet, would be short enough to challenge your skills without ocean fog and minimum visibility of a mile.

A southerly landing will make the runway even shorter. The threshold is displaced 559 feet--good reason to make an occasional short-field landing from a practice instrument approach.

Welcome to Chester, a serene country airfield by the sea.