Get the app Get the app
Already a member? Please login below for an enhanced experience. Not a member? Join today
News & Media Wings over West Africa: Opportunity, inspiration in the air

Wings over West Africa: Opportunity, inspiration in the air 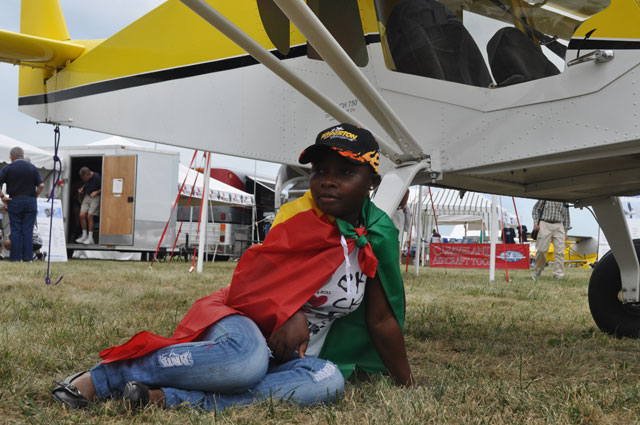 Kpong Airfield in the Eastern region of Ghana is much different from the market, said 17-year-old Lydia Wetsi. It’s cleaner, for one: Wetsi helps make sure of that during her FOD walks, when she removes foreign object debris such as stones or dead animals and tamps down termite mounds that spring up on the runway.

Discipline and tidiness are among the principles the student at the field’s Aviation and Technology (AvTech) Academy is learning, along with the skills to build and fly airplanes, in a program that has transformed her thinking—about the disability that once kept her out of school but now can’t keep her out of the sky, and about sanitation and health practices that could have prevented it.

Two years ago, Wetsi was helping her mother in the market when the organizers of the Kpong-based Waasps, which supports AvTech Academy and humanitarian flying group Medicine on the Move, met her and asked to take her to get treatment for her right arm. The arm was infected and contorted, with her wrist pulled up toward her shoulder. Herbal treatments of an early-childhood sting of some sort had caused complications, leading to serious infection and contracture of the arm. 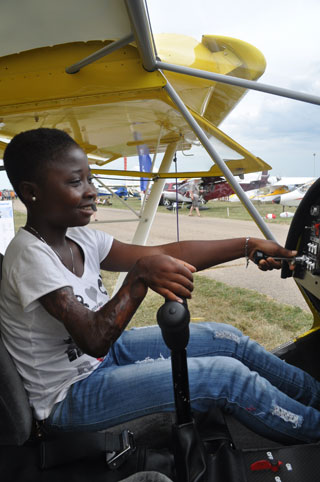 Wetsi came to the airfield and started treatment at a hospital, starting a long process that would include surgeries and physical therapy to increase the mobility of her arm. She got medicine to clear the infection, and was able to start classes at the newly formed AvTech Academy. Then, she went up for a flight. Jonathan Porter, the head of Waasps and its associated organizations, took her out over Lake Volta and the market where she used to work. She couldn’t believe the beautiful landscape below her, she said.

“The day they took me flying, that was the happiest day of my life,” Wetsi said. “… I was so happy, I was so overwhelmed.” She wanted to fly, too.

The small training facility at Kpong Airfield offers young women an opportunity to learn airplane building and other skills that will lead to a guaranteed job on the airfield. Upon completion of the four-year course of study, the three students in Wetsi’s class will build and maintain Zenith light sport aircraft for Waasps and support the missions of Medicine on the Move, which provides health education to rural communities and uses the aircraft to drop up to 1 kilogram at a time of health education materials.

Porter said the program changes the young women’s way of thinking and empowers students who are committed to giving back to their home country. “This is for the kids who can’t afford it, who have got the ability and not the finances,” he said. Lydia is one example.

Before she came to Kpong, Wetsi said, she had only had about three years of formal schooling; her parents had feared that other students would hit the wound. At AvTech Academy, her English improved. She learned to make sure every tool was laid out, the parts measured and cut, when working on an airplane; and learned the value of wearing protective gear such as safety boots in the shop and donning high-visibility clothing to work on the airfield.

She’s proud when she finishes a part and it passes inspection, she said, but she especially loves flying.

After a series of surgeries and physical therapy, Wetsi has increased mobility, and is building muscle in her arm as she uses the center-mounted stick in the Zenith STOL CH 701. She hopes to earn her certificate so she can fly to the communities around the airfield to bring them health education.

Already Wetsi has begun to share the health lessons she has learned. She has given a talk to community leaders, she said, explaining what happened to her arm and the proper way to treat wounds: Use antiseptic cream instead of leaves, which are not sterile, she said. 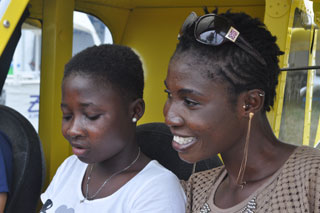 Wetsi receives ground instruction from Patricia Mawuli Nyekodzi, who also learned to fly at Kpong Airfield in Ghana and joined Wetsi at EAA AirVenture this year.

Now she has logged about eight to 10 hours of instruction, she said, mostly pattern work. She is able to use the stick and throttle and reach the panel better with her right arm, she said, and the Zenith’s center-mounted stick and light controls make it possible for her to control the airplane on her own.

“It’s a lot more than learning to fly,” said Porter, her flight instructor. “It’s using an airplane as a physical therapy tool, and an emotional therapy tool.” He said Wetsi has built confidence from flying, and was motivated by flying while going through physical therapy in the hospital following surgery. She had an opportunity to attend EAA AirVenture this year, where she reunited with Jessica Cox, an American sport pilot who was born without arms. While Wetsi’s quest to earn a pilot certificate as a person with a physical disability is unusual in West Africa, it’s far more common in the United States; Cox had visited Wetsi in Ghana, offering herself as proof that people with disabilities can become capable pilots.

While a project to re-engine the Zenith with a Rotax 912iS took the aircraft off the line for a while, Wetsi has earned a cache of “flying dollars” from her schoolwork to put toward flight training, and she plans to resume flight training when she returns to Ghana.

“When I’m flying I get happier than when I’m on the ground,” she said.