Get the app Get the app
Already a member? Please login below for an enhanced experience. Not a member? Join today
News & Media Kestrel turboprop project soldiers on 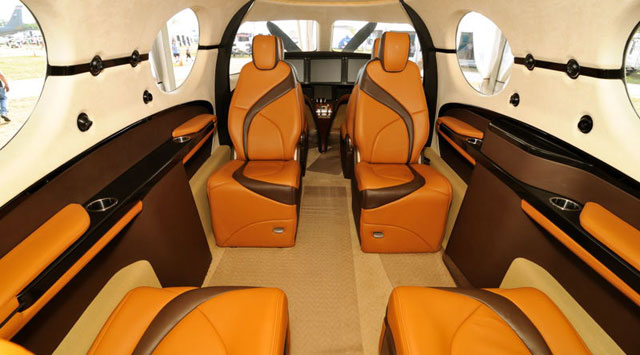 A yearlong effort by engineers and designers at Kestrel Aircraft has paid off in the form of a new cabin mockup that defines the future for the beefy single-engine turboprop.

COO Steve Serfling reports that the aerodynamic shape of the aircraft is frozen, including the wing, tail, window placement, and door positions and sizes. Tweaks continue to the cowling shape; the cowling will house a Honeywell TPE331-14 turboprop engine that will be flat rated to about 1,000 shaft horsepower, according to Serfling. The new mockup shows large horizontal oval-shaped windows that provide a clear view of the horizon from any seat. A large wrap-around windshield provides a similar view from the cockpit. A planned hard door aft of the club-seat section will partition off the entry door and baggage area and its refreshment center. The center includes a small toilet in a drawer near the floor.

According to Serfling, the four-seat cabin and two-seat cockpit will feature many electrical outlets and USB ports for electronic devices and entertainment. The company has not yet selected an avionics manufacturer.

The cabin designers paid special attention to cockpit access, making it as easy as possible for larger people to get into the front seats. The maneuvers are helped by using side-stick controllers rather conventional yokes.

The Kestrel airframe started out as a product of Farnborough Aircraft. Alan Klapmeier, co-founder of Cirrus Aircraft, bought the design two years ago and has been moving it toward production and certification ever since.

To accomplish the spacious cabin, the engineering team enlarged the original Farnborough-developed airframe. The ceiling is 3 inches higher, mostly as a result of dropping the wing down to allow for a flat cabin floor. The cockpit area is 6 inches wider and the main cabin is 4 inches wider. The baggage compartment is 9 inches wider.

Serfling says the airplane will carry six people and bags with full fuel (1,200 lbs useful load with full fuel) some 1,300 nm with NBAA IFR reserves. The airplane is expected to cruise at some 320 knots and cruise as high as 31,000 feet, providing an 8,000-foot cabin.

While much progress has been made on the design, Klapmeier reports progress on the entire project is dependent on funding. The project is on its fourth phase of funding, he said, a process that is “pointlessly difficult. It should be faster; it should be based on performance,” he said, meaning that companies that show they can effectively produce a desired product should be able to achieve funding much more easily.

While impatient with the pace of the financing process, Klapmeier said he was not interested in receiving funding from Chinese sources, as many other companies have, including his former company, Cirrus.

Klapmeier said he has exactly the number of orders he wants at this point: zero. He sees taking escrowed deposits as pointless. And, he says, given all the recent financial failures of various aircraft projects, no one would give him deposits that were not escrowed—and he understands why.

When the project is able to provide greater comfort for buyers in the form of price, performance, and delivery schedule, Kestrel will seek binding, nonrefundable deposits.

Meanwhile, he expects the airplane is at least three years away from certification, a timeline that is dependent on the funding process. He projects a price of around $3 million.

The next model won’t fly until after AirVenture 2013, Klapmeier said, seemingly setting expectations for next year’s show.

Editor in Chief
AOPA Editor in Chief Tom Haines joined AOPA in 1988. He owns and flies a Beechcraft A36 Bonanza. Since soloing at 16 and earning a private pilot certificate at 17, he has flown more than 100 models of general aviation airplanes.
Go to Thomas B Haines's Profile
Topics: Turbine Aircraft, Aircraft