Get the app Get the app
Already a member? Please login below for an enhanced experience. Not a member? Join today
News & Media Minnesota pilot wins $10,000 in spot landing contest 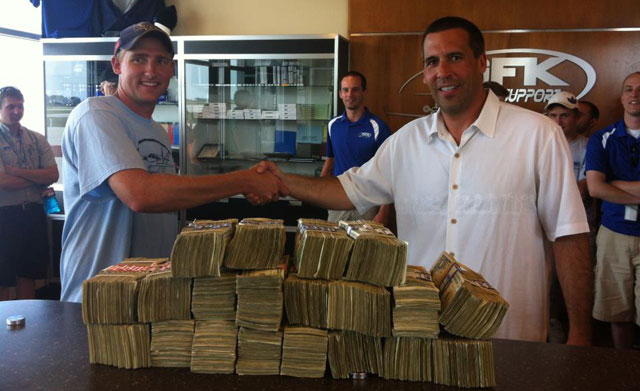 Hans Estby (left) shakes hands with GFK Flight Support President Brian Sefert next to the $10,000 he won in a spot landing contest.

A Minnesota pilot took home $10,000 on July 28 after he had the best score in a spot landing contest held at Grand Forks International Airport, Grand Forks, N.D.

Hans Estby of Hayfield, Minn., beat 39 other pilots by landing seven feet from a target in his Cessna 150. He was presented with 10,000 dollar bills. The contest was sponsored by GFK Flight Support, based at Grand Forks International Airport, in conjunction with Grand Forks Airport Authority, World Fuel Services, and Acme Tools.

Ten thousand singles makes quite a few stacks, as you can see from the photo. “We wanted to make an impact and we thought it looked pretty cool to see that big ol’ pile of money there,” said Sean Varian, chief pilot of GFK Flight Support.

While 40 aircraft competed, more than 270 had registered for the free event, and 100 aircraft were expected to turn up. Varian said he wasn’t sure what might have caused the lower turnout. The event was held during the next-to-last day of AirVenture 2012, but he didn’t believe that had much impact. “We weren’t really concerned about Oshkosh,” he said, adding that the 10 Grand Landing contest drew pilots from as far away as Washington state and Illinois.

Super Cubs with tundra tires, a Cessna 402, and even a Pilatus were among aircraft that made the spot landing attempt. Each pilot got just one shot at the prize.

GFK Flight Support President Brian Sefert created the event to promote general aviation and encourage people “to visit our great airport.” Varian says it will be held next year and the company hopes to make it an annual event.