Get the app Get the app
AOPA will be closed on Monday, May 25, 2020, in observance of Memorial Day.
Already a member? Please login below for an enhanced experience. Not a member? Join today
News & Videos V is for Velocity

V is for Velocity

The six V speeds every pilot should know

Regardless of what the rest of the nonflying world thinks, V is not for vendetta. V is also not for vengeance, even if mystery writer Sue Grafton says it is. In our world V is for velocity, and being consciously aware of that reality is critical to our safety in the air.

The FAA thinks highly enough of V speeds to specifically define them in the federal aviation regulations. In fact, Part 1 of the FARs includes definitions for 35 separate V speeds. All of them are important, too. However, of those 35 speeds, there are six that every pilot should know, whether he is an airline captain flying a widebody over the ocean, or a student pilot guiding an LSA around the pattern.

� VR. Let’s start with VR, the speed that will set us up to get airborne in a reliable, predictable fashion. Sure, you could push the throttle all the way up, pull the controls back, and wait. You might get airborne, or you might mush along the runway creating so much drag that you never rise into the air at all. Rather than build an undesirable level of risk into our flying experience, engineers and test pilots devised the concept of a rotation speed. And that’s exactly what VR is: rotation speed.

Going back to the FARs, we can find specific information in Part 23 that tells us that VR is “the speed at which the pilot makes a control input, with the intention of lifting the airplane out of contact with the runway or water surface.” It’s not a random number plucked from the ether. VR is a specific airspeed that, for single-engine airplanes, must by regulation be no less than VS1, which is the stalling speed of the aircraft in a specific configuration.

That makes sense. By establishing a rotation speed that is at or above the stalling speed in a specific configuration, you can enhance the safety of flight. If the pilot doesn’t even try to get airborne until the aircraft is moving at a speed that will allow it to fly effectively, the likelihood of an inadvertent stall on takeoff is reduced considerably.

Imagine how many very short, overly exciting flights might have been turned into much longer, much less dangerous flights in the early days of aviation, had they only known of the importance of VR.

� VS. According to the FAA, VS is the stalling speed, or the minimum steady flight speed at which the airplane is controllable. One knot higher and you’re flying. One knot lower and you’re not. Ironically, it could be argued that the key to understanding VS isn’t the airspeed at all. It is what the airspeed represents, for it is at VS that your airplane will be at the critical angle of attack. That’s assuming you are in straight-and-level flight, of course. VS is the point at which the air flowing over the upper surface of the wing can no longer flow smoothly to the trailing edge. It eddies and burbles and leaves the surface to wander aimlessly in the surrounding atmosphere. Lift is lost, drag increases, the nose drops, and a stall ensues.

Violating VS isn’t necessarily a bad thing. Pilots stall their airplanes all the time. They do it in training; they do it when they’re working on proficiency in the airplane; and they stall it inches above the ground to drop it smoothly onto the runway whenever they perform a good landing. With the stall horn blaring, a slight buffet felt through the controls, and a sudden settling of the airplane back to earth, a good pilot can violate VS on every flight and still be considered to be a good pilot. The key that separates a good stall from a bad stall is where we violate VS, and whether we do it by choice or by chance.

� VA. That brings us to VA. There isn’t a flight student in the United States who hasn’t had the basics drilled into his head about the importance of VA. It’s often called the aircraft’s design maneuvering speed, and that has caused many a pilot to misunderstand what VA really is, and how it can be unintentionally violated—with potentially catastrophic results. 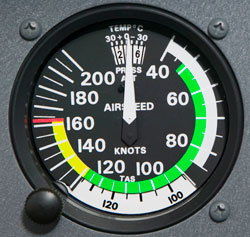 The first oddity about VA is that it changes with the weight of the aircraft. As the airplane gets lighter, VA gets lower. That quirk of the various sciences affecting aircraft in flight means that VA represents a range of airspeeds for any given airplane. If the airplane is loaded to its maximum weight, its design maneuvering speed is higher. As the fuel burns off and a passenger gets out at an intermediate stop, taking a suitcase with him, the airplane gets lighter, which results in VA becoming a lower speed.

Knowing what VA really is and sticking to it is tremendously important to anyone who plans to be safe in the air. In an unstable air mass where air currents cause a bumpy ride, those bumps are imposing momentary increases in load factor on the airplane. If you’re at or below VA, the airplane will stall before the structure is damaged by excessive loads. But if your airspeed sneaks above VA and a gust causes a sudden, substantial increase in load factor, it could be the structure that fails. As you can imagine, an in-flight structural failure—which may be as severe as the loss of the tail section—tends to shift an otherwise uneventful flight in the direction of an unpleasant outcome.

Even if the structure doesn’t fail, nobody wants to get back home to see wrinkled skin on their aircraft.

Many pilots mistakenly believe the term “design maneuvering speed” means that, as long as you are at or below VA, you can move the controls from stop to stop repeatedly without doing damage to the aircraft. That’s not really true. In fact, the FAA was concerned enough about this misunderstanding of the term to add a statement to Part 25 of the FARs for Transport category aircraft. Although this part doesn’t come into play in the certification of general aviation aircraft, the science is still valid. The FAA says, in part, “flying at or below the design maneuvering speed does not allow a pilot to make multiple large control inputs in one airplane axis or single full control inputs in more than one airplane axis at a time without endangering the airplane’s structure.”

The crux of that statement is, essentially, cool it. Stay at or below VA in rough air, and avoid large control inputs that might cause significant damage to the aircraft.

� VFE. One important V speed doesn’t actually apply to all pilots—at least not in every airplane they fly. VFE is the maximum flap extended speed, and it is represented by the top of the white arc on the airspeed indicator. Below this speed you can hang the flaps out all day long. Above VFE is a different story entirely. If your airspeed rises above the top of the white arc while your flaps are down, you may damage or even lose one or both of your flaps. Where it gets confusing is in airplanes where partial flaps are allowed above VFE. When this happens, often a placard will remind the pilot of the maximum partial-flap speed.

Admittedly, not all airplanes have flaps. Most do, though, especially those built since the mid-1950s. So even Cub and Champ drivers who are used to motoring around in an airplane that is flap-free will find it useful to remember the meaning of VFE. One day you may borrow, rent, buy, or become a partner in an airplane with a more modern wing that benefits from the additional lift and drag flaps can offer.

� VNO. Many pilots unwisely may be tempted to flirt with VNO. It’s easily identifiable as the speed that corresponds with the upper limit of the green arc on the airspeed indicator. Maximum structural cruising speed is the highest speed you can safely pilot your aircraft in smooth air. Above that limit you may cause damage to the airplane. Then again, you may fly into an area of less-than-smooth air that can cause damage at less than VNO. All the more reason to be cautious when dealing with the speed of your aircraft.

� VNE. The one airspeed that contains no mystery at all is VNE. Don’t go there. Never-exceed speed is an absolute limit, and the name suggests exactly how important this airspeed restriction is. The manufacturer, its engineering staff, and the test pilots who brought the airplane to market are all in agreement: You should never attempt to fly your airplane faster than VNE for any reason. Even the color code—a red line on the airspeed indicator—says stop. So take their word for it.

Of course the upshot of all this is simple. The goal is to be safe, maintain the structural integrity of the airplane, and enjoy each and every flight as much as possible. That’s a tough goal to reach if parts are bending, breaking, or falling off the airplane. A good pilot can prevent that from happening by simply knowing and observing the V speeds established for his or her airplane.