Get the app Get the app
News & Media The Piper Meridian

Still the same, yet better than ever

Piper has fine-tuned its flagship product over the past decade, and while it is still the same aircraft at heart, all the little changes have made a difference—in a very good way.

When considering the relatively small market segment of single-engine, pressurized turboprops, the Piper Meridian is still the youngest in terms of time in production. Despite its short tenure, the Meridian has managed to become one of the most popular airframes among owner-flown turbine aircraft. It really is no surprise why: The Meridian remains unmatched in initial acquisition and direct operating costs for the performance and utility it offers.

Although the Meridian has been in production fewer than 12 years, it is far from the new kid on the block. The airframe is a derivative of the venerable piston-engine PA–46 Malibu and Malibu Mirage line, which has been in production since 1983. The engine in the Meridian is the Pratt & Whitney Canada PT6A-42A—a distinguished member of the PT6A family that has been the engine series of choice in more than 100 different aircraft models all over the globe.

During the mid-1990s, Piper found strong interest in a potential turboprop variant of the company’s Malibu Mirage. In fact, many industry professionals believed it was long overdue, so in 1997, the company announced it would develop such a turboprop. Thus, the PA–46-500TP Malibu Meridian was born.

Regular production of the Meridian began in 1999, and the first deliveries of the aircraft began in late 2000. The first Meridians carried a base price of $1,375,000. The new model was received well by the market, and between December 2000 and December 2001, Piper pushed out nearly 100 Meridians, almost all of which were already spoken for by customers on the company’s large backlog of orders. 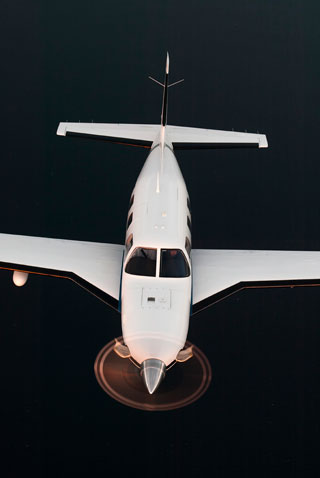 It does not take a Piper expert to see the Meridian shares similarities with its piston-powered sibling, the Mirage. Both utilize a common fuselage with a pressurized, six-place cabin. Dimension-wise, the two aircraft are not all that different. Both stand 11.3 feet tall at the tallest point, the top of the vertical stabilizer. Spinner to tail, the Meridian is a bit more than eight inches longer than the Mirage because of the longer turbine engine. Each has a wingspan of 43 feet, although the Meridian wing is unique from the other PA–46 variants, mainly to handle the heavier weight and carry more fuel for the thirstier PT6A. Most agree that the Meridian has a larger ramp presence. Some attribute this to the nearly seven-foot-diameter, four-blade Hartzell prop; others notice the large PT6A exhaust stacks protruding from both sides of the cowling; some even notice the wing shape is different and larger than that of the Mirage. These subtle yet clearly distinguishable differences make it evident the Meridian is a different animal altogether.

During the past decade, the airframe of the Meridian has remained largely unchanged. Nevertheless, a number of improvements have occurred. A noteworthy change occurred in mid-2003 with the incorporation of a modification that raised the maximum gross weight from 4,850 pounds to 5,092 pounds. Omitting the specific engineering details, this increase was mainly achieved by incorporating additional structural support for the landing gear and part of the wing, and placing vortex generators on the wings. The VGs were added to the top side of the wing, just aft of the pneumatic boots. Incidentally, the presence of vortex generators is the easily identifiable trait of Meridians with the higher gross weight. For a period of time, Piper made a retrofit kit available to owners of lower-gross-weight Meridians, which is why there are 2001- and 2002-year model aircraft flying around with the 5,092-pound gross weight, but this kit is no longer available.

Anyone who has owned an aircraft with a pressurized cabin knows pressurization systems can require frequent maintenance. Over the years, though, the Meridian’s environmental control system (ECS) has proven highly reliable. However, there have been a few changes to enhance certain components of the system. For example, in early 2008, a modification was made to the ECS air ducting that allowed for a more consistent airflow into the pressure vessel, which in turn eliminated erratic cabin altitude rate changes. Another update in late 2009 involved replacing the valve motor for the mass flow controller with a new model that was less prone to failure. This flaw was a common issue of Meridians manufactured from 2001 through 2009, and when the valve motor did fail, the pilot would lose the ability to control the cabin temperature (the valve regulates the flow of ambient air into the cabin). Fortunately for owners of the older Meridians, upgrades to the ECS system are available to these aircraft via service kits.

Starting with early 2007 models, Piper began delivering Meridians without storm windows on the left cockpit side window, and while this may seem like a minor change, it caused a bit of a stir among current and potential owners as many of them really liked that little window. Owners of “old-style-window” aircraft are required to either inspect the storm window for cracks every 50 hours or replace the entire window with the new, storm-windowless version, which terminates the recurring inspection.

Other small changes through the years include cabin interior enhancements. Interior leathers have greatly improved in quality and feel. The support cables for the cabin entry door have always been problematic for PA–46 aircraft, so in late 2008, Piper made the cables more robust. However, some owners preferred previous models whose systems had smaller-diameter cables that retracted into the door and a viscous damper to slowly drop the lower half of the door rather than let it free-fall. For 2012 models, there are several interior changes: flat fold-down seatbacks for the aft-facing seats and co-pilot seat for easier cockpit access, redesigned cockpit side panels to allow more elbow and hip room, light emitting diode (LED) interior lighting, and the addition of two 110-volt outlets in the cabin for electronic devices. 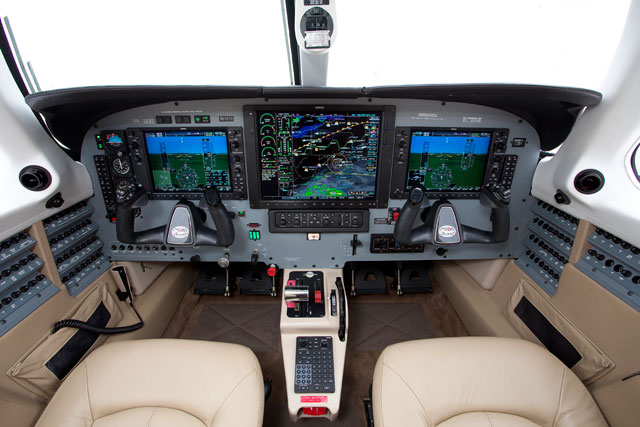 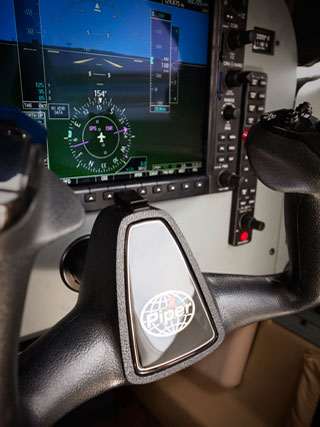 The PT6A-42A engine comes from a line of well-established engines, and it has been well integrated with the Meridian airframe. However, like the airframe, it has seen several small yet effective improvements since first deliveries. One of the more prominent, starting with 2004 models, added components to allow for operations in outside air temperatures as low as minus 54 degrees C (previous models had a low-temperature limit of minus 41 degrees C). The new lower limit was attained by adding a fuel temperature gauge in the cockpit and replacing the flexible engine hoses with solid ones. A retrofit kit is available for pre-2004 models via a service bulletin.

Equally significant were the changes to the engine mounts. In Meridians from model years 2001 through mid-2006, there was a widespread problem of cracks forming on the engine mount at the points where the nose landing gear attached to the mount. Piper covered the bill on this one; the company paid to have the engine mounts replaced on more than 200 Meridians. This was of equal benefit to future Meridian owners as today there are no aircraft flying with the old-style mount—or at least there shouldn’t be.

The meridian has had three base avionics packages available from the factory, and arguably, each evolution has made the Meridian progressively better.

When first designing the Meridian, Piper teamed up with Meggitt Avionics for an avionics suite exclusive to the Meridian, and the result was the Meggitt MAGIC (Meggitt Avionics Next Generation Integrated Cockpit). The MAGIC system was a perfect pairing for the advanced Meridian, offering electronic flight and engine instrumentation (EFIS), Bendix/King color radar, and GPS navigation provided by dual Garmin GNS530 units. The system came paired with an S-Tec 550 autopilot, though in 2003 it was replaced by Meggitt’s 1500 autopilot. The 1500 added a nterface and an indicated airspeed hold function for climbs and descents.

By 2004, when other GA aircraft were starting to be delivered with full glass-panel cockpits, the MAGIC system was becoming obsolete. In the 2006 models, Meridians were delivered with the Avidyne Entegra avionics suite, comprised of two EXP5000 primary flight displays, one EX5000 multifunction display, two Garmin GNS430 units, and the 1500 autopilot. The Meridian had officially entered the glass-cockpit era. The Avidyne system offered numerous improvements over the MAGIC; among them was datalink (satellite) weather and Jeppesen charts displayed on the 10-inch MFD. In late 2008, the aircraft was delivered with dual WAAS-enabled GNS430W navigators, and a retrofit kit was made available for non-WAAS-enabled aircraft to upgrade.

After a near four-year run with the Avidyne Entegra, customers grew anxious for something new. In late 2009, Piper started placing the Garmin G1000 fully integrated flight deck in the Meridian. With this new system, owners were immersed in the latest technology, including the integration of the Garmin GFC 700 autopilot, Garmin’s Synthetic Vision Technology, satellite weather and radio, and a 15-inch MFD in the middle of the panel.

Piper is still producing the Meridian, and the G1000 remains the avionics platform of choice for new aircraft. And although pilots and owners always crave the latest and greatest, there is still heavy demand for previously owned MAGIC and Avidyne-equipped Meridians, mainly because of lower prices. The base price of a brand-new 2012 Meridian with G1000 avionics is $2.13 million. A pre-owned 2009 Meridian with G1000 can be bought for $1.5 to $1.6 million, depending on hours, additional equipment, and history. The Avidyne Entegra system is still a worthy competitor to the G1000, and a 2006 Avidyne-equipped Meridian with higher-than-fleet-average total time and no WAAS can be found very close to $1 million. Not surprisingly, the Meggitt MAGIC Meridians vary the most in price, mainly because there is so much variation in airframe and engine hours as well as equipment. For example, a buyer can likely pick up an earlier model Meridian for less than $700,000, but it will have base avionics, higher time, and the lower maximum gross weight. Alternatively, one could spend $900,000 or more for one with upgraded avionics, lower time, and the high gross weight. Needless to say, there are Meridians out there fitting a wide range of budgets, but all boast the same impressive résumé: performance and technology flawlessly integrated with simplicity and proven reliability.

Andrew Gallagher is a 2,000-hour commercial pilot and CFI. He works in sales and training at jetAVIVA in Santa Monica, California. 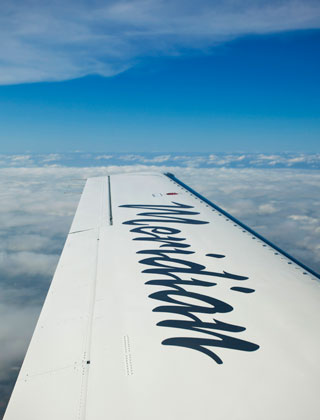