Get the app Get the app
AOPA will be closed July 4th, in observance of the Independence Day holiday. We will reopen at 8:30 am ET on Tuesday, July 5.
News & Media Avionics: Welcome to the Future

Avionics: Welcome to the Future

Stratus displays an ADS-B national composite radar on ForeFlight Mobile. The only remaining question was when. 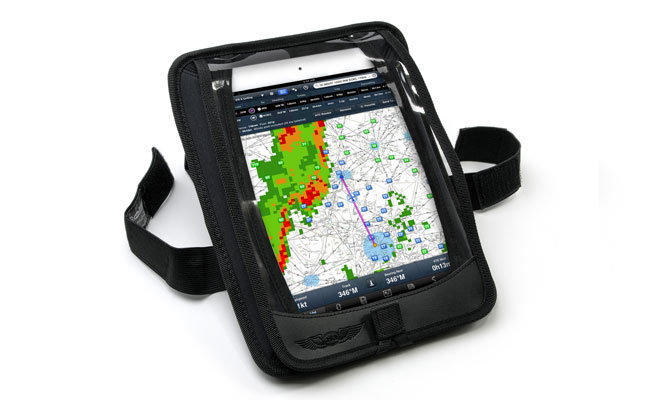 The only remaining question was when. It was clear that while the Apple iPad has always been a great cockpit tool, it never was going to fully rival installed displays until it could depict in-flight weather. Thanks to a few new products on the market, it’s safe to say that day is here, and the next generation of the iPad era has begun. 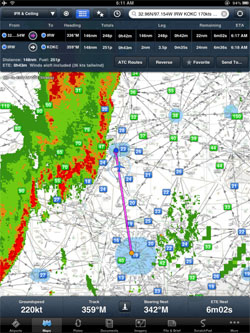 The choices break down into two separate and distinct categories based on the original source of the data. Satellite-delivered—which many pilots have come to know and rely on over the past decade as the only source of cockpit weather—and ADS-B, which is the government broadcast offering free in-flight weather. Further choice comes in the form of hardware that uses each of these services. WX Worx, a subsidiary of XM weather provider Baron Weather Services, offers one satellite-based iPad solution called Mobile Link, while ADS-B weather can be displayed on the iPad with Stratus and Skyradar. To make things more complicated, each box only works with certain applications (see “Weather Pairings,” page 88).

With choice comes confusion, and that is certainly the case with weather on the iPad. Although each has different weather products, update times, and display options, for many pilots the choice will come down to price. ADS-B weather (technically called FIS-B) is free, while XM costs anywhere between $35 and $55 a month. For pilots who already have XM, however, one subscription will work with both the iPad and your panel-mount or other portable display.

According to Bob Baron Sr., the founder of Baron Weather Services, the difference comes down to his company’s products being a dedicated weather system, as opposed to ADS-B’s “add-on to the air traffic system.” Baron’s point is that his product is sent from two satellites and the ADS-B signal is sent from a series of ground antennas that are being built out primarily for the next generation air traffic system.

John Zimmerman, a vice president at Sporty’s Pilot Shop, which developed Stratus with ForeFlight and Appareo, thinks his company is on the cutting edge with an ADS-B solution. Pilots love free, he says. Simplicity is also the name of the game with Stratus. “It’s so basic it’s kind of boring,” he said during our test flight. And he’s right. 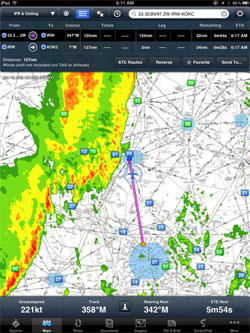 We tested Stratus around our home base in Frederick, Maryland, on what was unfortunately a pretty nice day. In this case marketing really did prove to be the reality. You simply push a button, set the small box on the glareshield, select the Stratus WiFi network on your iPad, and then open ForeFlight and go. We started picking up data at around 1,500 agl, which is typical.

One of ADS-B’s drawbacks is in the complexity of the antenna system. As Baron points out, with satellite coverage his goal is to get you all the weather products before you take off, which is common. With ADS-B, when and where you get data is entirely dependent on how far away you are from an antenna, and which type of antenna it is. The FAA maintains a good coverage map on its website. As an oversimplification, if you fly anywhere outside the remote Rocky Mountain region, you will get a signal.

Since Frederick has good coverage, we got the regional radar picture in just a few minutes, but the national composite took an agonizing 45 minutes. According to the specs, that shouldn’t have happened, but it goes to show that ADS-B has some hiccups. As for Stratus, it performed flawlessly. There are no antennas, the battery goes for at least eight hours, and the weather products integrate seamlessly in ForeFlight’s software.

It’s in these areas that Baron has its work cut out for it. Mobile Link is simply a WiFi box that sends the XM data between a Wx Worx receiver and the iPad. It’s not inexpensive; if you don’t already have a Wx Worx receiver, the entire system will set you back more than $1,000. Because Baron saw the demand and wanted to come to market quickly, the system is somewhat of a Frankenstein approach, which results in a bevy of wires. It requires ship’s power and some time to get it set in the airplane before it’s out of the pilot’s way.

But once it’s all set up, the results are stunning. We test flew MobileLink paired with the Garmin Pilot EFB from Frederick to and from Sun ’n Fun in Lakeland in March. Rather, we tried to fly it there and back. On the way down the WiFi network wouldn’t stay connected and we never got weather. It’s impossible to say if that was an iPad, power, or MobileLink issue. But on the way back we flew through and around lots of weather, and the system performed beautifully. With XM also showing on the panel-mounted Garmin 530, we were afforded the opportunity to compare and contrast the legacy system with the future. The results were clear—weather on the iPad is a significantly better presentation. The resolution is fantastic, and quickly swiping around the map to examine the weather over a large area is quick and easy.

Whatever system you choose, it is now clear that if you’ve been holding back on an iPad, you are working too hard in the cockpit. Weather has completed the picture, and both the Baron XM and Stratus ADS-B solutions will make your flying easier, safer, and more enjoyable than ever.