Get the app Get the app
AOPA will be closed July 4th, in observance of the Independence Day holiday. We will reopen at 8:30 am ET on Tuesday, July 5.
News & Media Fly-Outs: Pie, please!

Just don't fly in on a Monday

Just don't fly in on a Monday. 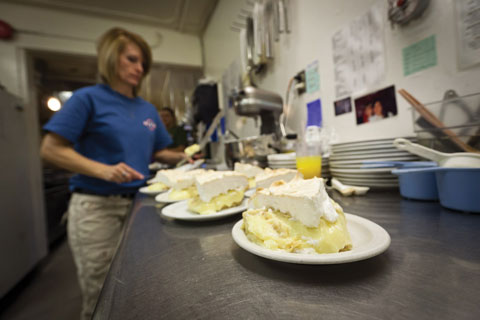 A pilot inbound for a bite to eat at the Airport Café at Grimes Field announces his intentions over the radio. Problem is, it’s a Monday. A local pilot in the air breaks the news: The café is closed on Mondays. No $100 hamburger, no pie.

Located in Urbana, Ohio, Grimes Field is steeped in aviation history. The airport offers two museums, one celebrating Grimes Manufacturing Co., started in 1933 by Warren Grimes, the airport founder and father of aircraft lighting who created the first exterior lights for Henry Ford on his Ford Tri-Motor. The museum houses the immaculately restored Beech 18 Grimes Flying Lab, outfitted with 56 exterior lights, once used as a testbed and sales demonstration platform. The other, Champaign Aviation Museum, is home to a restored, flying North American B–25 Mitchell, Champaign Gal, along with a Douglas C–47 Skytrain, and more. Volunteers can roll up their sleeves to help restore the museum’s current project, a B–17 dubbed Champaign Lady; used in the movie Twelve O’Clock High.

In addition to the museums, the restaurant’s hometown atmosphere and home-cooked food make the airport popular with the locals and attract pilots from around the country. The airport is booming with business every day—except Mondays, when the parking lot and ramp are mostly empty. The café, which overlooks the ramp and runways, has been in owner Doug Hall’s family for 22 years. Its beef is raised on Hall’s family farm, bison is purchased from a nearby farm, and fruit and cream pies are made from scratch each day.

“There’s times when you know everyone in here,” says 21-year-old waitress Alyssa Adkins. “The pie is really popular,” she adds, explaining that folks will drive or fly long distances for the sweet treat offered warm, à la mode. Pilots from Chicago have stopped for pie on the way to Sun ’n Fun in Florida and purchased extra for the trip; one pilot from Sacramento who recently visited the airport for an event
had heard about the famed pies as well, Hall says.

Bruce Bream has flown his Piper Arrow III to the field from Cuyahoga County Airport in Cleveland for the last 12 years and orders “the usual thing, I suppose—the pie.” What makes the pies so irresistible? “That’s all secret,” Hall says with a grin. You’ll have to visit the restaurant to try the pies yourself. Just don’t fly in on a Monday.